A recovering "boba" addict explains the appeal of bubble tea 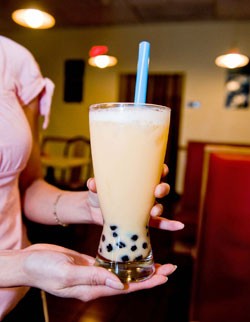 Lumpy drinks — for some people, that phrase calls up only ugly memories of gulping down coffee filled with curds of turned half ’n’ half. They don’t know what they’re missing. When I was a kid, my poison of choice was a clear, Pixie-Stix-sweet syrup with bright balls of gellan gum suspended throughout. Made by the fine folks from Clearly Canadian, Orbitz didn’t last long, and I was among the few to mourn its passing.

I was a little older — 19 — when I heard about something called bubble tea. There were faint whisperings in food magazines about Asian smoothies with floating tapioca balls making their way to cafés in large U.S. cities.

Further research suggested the trend had been a long time coming. Two Taiwan coffeehouses claim they were the first to add tapioca balls — or “boba” — to milky teas back in the early ’80s. The candy-colored drinks — now in fruit flavors — were in the hands of So-Cal hipsters by the late ’90s. Boba, as it happens, is the Taiwanese slang for “big breasts.” The black tapioca pearls sink to the bottom of cups of bubble tea, where they wait for the extra-large straw it takes to transport them from glass to mouth. Boba-based options are endless, from milk-based concoctions to smoothies, coffees and juices. Sometimes star- or heart-shaped flavored gelatin stands in for the traditional tapioca, which is a starchy byproduct of the cassava plant.

I got my first taste on a pilgrimage to Montréal. It sounds like haiku, but only poetry can describe the experience: watermelon flavor with milk, black balls rising through the straw. Few gastronomic encounters engage more senses than this room-temperature liquid cooled with a smattering of chopped ice resting atop firm but forgiving boba, brightly colored and smelling of summer fruit.

Delicious as it was, though, that plastic cup of pink liquid created a monster. Monthly Montréal trips became a necessity. Like a junkie, I would careen through the streets of Chinatown, up the stairs of Cactus Restaurant or Magic Idea, desperate for my next fix. I didn’t care who supplied me; I just needed a straw full of kiwi- or rose-flavored fluid with tapioca at the bottom.

Then I went to Los Angeles. My first day off the plane, I began with a food-court honeydew boba, continued to a coffeehouse for a pennywort jelly drink in Little Osaka, and ended with a taro-tapioca smoothie in a mall in Little Tokyo.

It was everywhere. I was visiting outposts of Asian countries as if I were at Epcot. In a week, I drank my way through two Chinatowns, Little Vietnam, Koreatown and everywhere in between. I had to take advantage. I knew the only comparable treat I could get at home was the straight-tea variety at Joyce’s Noodle House — OK, but not even in the same ballpark.

Luckily, word came of a new Vietnamese restaurant, M-Saigon, one of several that have recently sprouted up in the Burlington area. I heard they had pork meatballs, for which I’d been pining. The meatballs were sweet, smoky and tender, but something stole their thunder: my durian smoothie with boba.

Now, with a source just minutes from my door, I am no longer in perpetual tapioca frenzy. Knowing I can calmly stop in for mung bean- or cantaloupe-flavored milk, I am currently down to one boba a week. My name is Alice, and I am no longer a bobaholic.