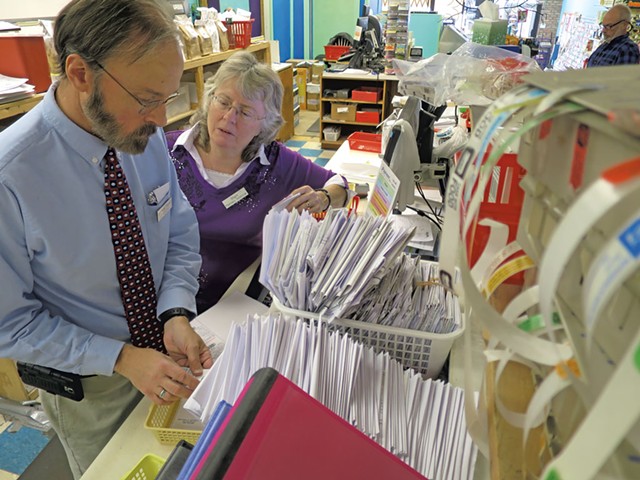 Lynne Vezina owns Vermont Family Pharmacy on North Avenue — one of just two remaining independent pharmacies in the city of Burlington. Last week found her pitching 20 seniors at the nearby Heineberg Senior Center. She assured them that her store caters to their individual needs, while chains like Rite Aid and CVS do not.

CVS, top dog in Big Pharma's retail realm, opened an outlet on Burlington's Church Street Marketplace in August. It's more mini-mart than pharmacy, with its prescription counter wedged into a far corner of the space previously occupied by City Sports. In joining the Rite Aid, Walgreens and Kinney Drugs chains doing business in the Queen City, CVS is heightening competitive pressures on Vezina's New North End operation and on locally owned Lakeside Pharmacy on Pearl Street.

In addition to being "always available to discuss insurance issues and medication," her pharmacy makes free deliveries two days a week, Vezina told the elders. The store her father opened in a clapboard former residence in 1983 stocks plenty of useful merchandise, too, she noted: commodes, ice tips for canes and "compression stockings in fashionable styles."

Some of her mostly female listeners nodded approvingly from their rocking chairs. One of them, Hilda Carrier, said the pharmacy had delivered meds for 30 years to her now-deceased husband, Marcel Carrier, who was paralyzed by a dive into shallow water at Porters Point on Lake Champlain. Vezina's father, Manny Chernoff, "knew how to get into the house" if her husband was napping, Carrier related. "They took good care of him, medically and mentally."

After a half hour of answering questions that amounted to one-on-one consultations, Vezina spoke to Seven Days about her struggles sustaining a small business. Hers competes not only with a nearby Rite Aid, but with the pharmacy inside the local Hannaford. Big-box discounters such as Walmart and online prescription vendors are also grabbing market share.

One edge: Her pharmacy concocts compounds in-house as specialty medicines, Vezina explained. "Rite Aid doesn't do that because it takes a lot of time to make a compound," as opposed to scooping ready-made pills out of a container, she said.

Not surprisingly, Vezina, 56, puts in a long day, lengthened by the hours she and her bookkeeper, a former classmate at Burlington High School, devote to regulatory paperwork.

U.S. drugstore chains are getting longer and more impenetrable, amping up pressure on what remains of "Little Pharma."

Last year CVS acquired the pharmacies housed in Target outlets. That $2 billion takeover brought the number of links in the CVS chain to nearly 10,000 nationwide. But the Rhode Island-based behemoth could be toppled from its No. 1 spot if the feds green-light No. 2 Walgreens' $9.4 billion bid for No. 3 Rite Aid. Critics warn that this consolidation would create a "duopoly" resulting in reduced competition and higher consumer prices.

Vermont is home to 95 pharmacies owned either by chains like CVS, supermarkets like Hannaford, or mass merchandisers such as Costco and Walmart, according to the Secretary of State's Office in Montpelier. Another eight are affiliated with health institutions. Forty-eight have managed to remain locally owned.

Will the enhanced clout of retail conglomerates eventually kill off the homegrown survivors, including Vezina's store and Lakeside Pharmacy?

"That is the way it looks," conceded Chernoff, the octogenarian who in 1983 opened what became Vermont Family Pharmacy. "Chains definitely do have the upper hand."

But Lakeside owner Earl Pease, who is operating the equivalent of a mom-and-pop grocery in downtown Burlington, said he wishes his store were actually next door to Rite Aid rather than 100 yards away. "I'd love to go toe-to-toe with them," Pease puffed. "People could see immediately that our customer service is so superior."

He added with an equal degree of brio: "CVS has had no impact on us. None."

Indies such as Lakeside are sustained by long-standing relationships with patrons such as Ken Sanders. "I've been coming here for 10 years — closer to 20 — because I like the workers," Sanders said while waiting at the store's only register. "They treat you with respect, man."

Robert Starr, who was browsing Lakeside's modest selection of toiletries, said he used to get his prescriptions filled at Rite Aid. "But they don't call you if there's a problem," Starr noted. "Here they will. So I switched. 'Basta, Rite Aid,' I said. 'Basta!'"

Pease, 60, bought the business in 1981 when Lakeside was on St. Paul Street where CarShare Vermont operates today. The pharmacy was then 35 years old and had built a solid customer base. Pease moved it into the larger 3,000-square-foot space alongside Pearl Street Beverage in 1993. He was able to get a mortgage from Merchants Bank. "Thank God for the local bank!" Pease exclaimed. Ten days before Seven Days interviewed him, however, Merchants had announced it was being sold to a chain of banks based in Syracuse.

Owning the one-story building outright is a big advantage, as is having a parking lot next door, Pease noted. He became an entrepreneur for the reason that motivates many small-business owners: "I realized you could do better for your family by working for yourself rather than for someone else," Pease said. Prior to being his own boss, he was a deliveryman for a pharmacy in his native Rutland and subsequently got licensed as a pharmacist.

Like Vezina, Pease lamented how much time it takes to run an independent pharmacy. "It's tempting," Pease acknowledged, when asked if he'd consider selling Lakeside to a chain. "I get offers all the time, but I enjoy the challenge of trying to make money in a tough market, and I feel an obligation to my customers, who have been so loyal, and my employees." Some of his 10 part-time workers have been at Lakeside for 20 years, Pease pointed out.

The future is unwritten, he added. Pease has a son who is the likeliest candidate to pick up the pestle, but he said, "I don't think he has it in him, frankly."

Vezina faces the same dilemma. She has no children of her own to take over Vermont Family Pharmacy when she retires in 10 years or so. "I'm sort of hoping there's someone out there who will step up when the time comes," Vezina said.

She bought the business in 2003 from her father, who had founded it as a franchise of a chain called the Medicine Shoppe. Chernoff moved to Burlington from Boston in 1968, he recounted, in response to a job offer from Liggett's, a chain with a drug store in the space now occupied by Ben & Jerry's on Church Street.

He left after nine years. "I didn't like working for a chain," he said. "They don't teach you well enough," Chernoff explained.

Chains have other deficits as well, he said, suggesting that might allow the indies to continue operating after all — provided consumers scrutinize options more thoughtfully.

It's a myth, Chernoff insisted, that CVS consistently charges less for off-the-shelf products than does Vermont Family Pharmacy. "Chains probably do buy for less from wholesalers," he said, "but the cost of distribution drives up the prices they charge." Rite Aid, Walgreens, CVS, Kinney Drugs, Duane Reade, Rexall — they all have merchandise shipped to distribution centers that are expensive to operate, Chernoff said. "And then there's the cost of transporting goods to all their local stores," he noted.

Another possible source of salvation for Little Pharma is the current national glut of pharmacists, Chernoff suggested. "There's a lot more people coming out of pharmacy schools than there are jobs in the industry. Maybe some of them will start their own businesses," Chernoff reasoned.

That could happen, said Bob Hamilton, interim dean of the Albany College of Pharmacy and Health Sciences in Colchester, which has 165 students. A graduate of the Water Tower Hill campus did open an independent pharmacy a couple of years ago, Hamilton said. But contrary to the "glut" thesis, nearly everyone enrolled in his college does find work in some facet of the industry, with about three-quarters getting hired by chains, Hamilton added.

Noelle MacKay, director of Burlington's Community & Economic Development Office, said that Lakeside and other indies might be unrattled by the clanking of the chains because of the strength of the buy-local movement, especially among millennials — and particularly in Burlington.

"People here vote with their dollars," she said. "There's a reason why you see no McDonald's here and why 60 percent of stores [on the Church Street Marketplace] are locally owned."

At the same time, she added, "while politically we believe in small business, customers are looking for the familiar."

With straggly cacti and half-dead plants in its front window, Lakeside has a forlorn look that doesn't exactly beckon passersby. But twentysomething Jess Silverman took a chance and ventured in. She just wanted to get a key copied. Lakeside obliged, but Silverman said she'd probably turn to a brand-name chain for future purchases.

"I know I should shop local," she remarked as she exited Lakeside, "but honestly I'll go wherever is cheaper. And I assume that to be Rite Aid."