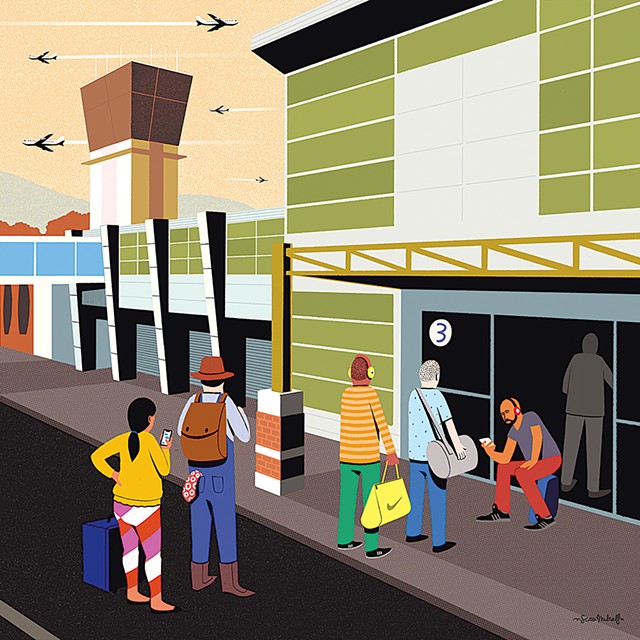 Boardings at Burlington International Airport are up significantly over last year as bigger planes touch down, reversing a seven-year slump and ushering in the possibility of lower fares.

This summer's passenger traffic was so brisk that the Transportation Security Administration brought in staff reinforcements from nearby airports in Rutland and Manchester, N.H., to help move the snaking lines of people through security on time to catch their flights.

Some travelers missed their planes anyway. As a result, airport staff are sending the message that cutting it close won't cut it anymore at BTV, despite the small size of the airport. New bright orange signs around the terminal proclaim: "2 HRS EARLY AT BTV IS RIGHT ON TIME."

The trend marks a rebound from a slide that began in 2011 and continued through last year. A sluggish economy, a weak Canadian dollar that depressed ticket purchases by Québécois and competition from other airports all contributed to sagging numbers.

But between January and August, boardings totaled 440,816 — up 13.2 percent from the same period in 2017. Airport officials project the figure will hit 670,000 this year, the most in at least seven years.

What's fueling the sky-high numbers? Bigger, roomier planes are flying in and out of BTV, for one. Over the last several years, three airlines — Delta, American and United — have swapped out small regional planes with fewer than 50 seats for aircraft that can hold two or three times as many passengers.

"We believe that the big change is the type of aircraft being flown in here," said Nic Longo, deputy director of aviation at BTV. "Seat capacity is growing dramatically, and the tickets sold follows right behind it," he added.

Budget airline Frontier will start flying Vermonters to Orlando, Fla., in February. It, too, will go relatively big, using a 180-seat Airbus A320.

The average round-trip fare from Burlington to JFK was $242 in March, the month Delta launched its flight, according to price tracking data from the airport. It fell to $117 in April and, except for a blip in July, stayed below $200 through September. Burlington prices often beat fares to JFK from Manchester, Albany, N.Y., and Montréal over the last six months, according to BTV data.

The latest figures from the U.S. Bureau of Transportation Statistics show that while average fares in Burlington have dropped 3.9 percent since 2015, they still run higher than key competitors' fares. In the first quarter of 2018, fares out of BTV averaged $419, compared to $398 from Albany, $370 from Manchester and $323 from Boston.

"We will never be Boston," conceded Gene Richards, director of aviation at BTV.

Still, the numbers appear to show that more local travelers are choosing the Vermont airport rather than driving to a bigger one, Longo said. More time is needed to draw firmer conclusions about the boon, he said.

Plattsburgh International Airport in New York, which draws many travelers from Montréal, has reported a drop in boardings so far this year, with about 25,000 fewer passengers than in 2017. Are the Canadians it serves headed to BTV instead? Longo downplayed Plattsburgh's significance as a competitor, saying its charter-dominated schedule doesn't serve a big sector of BTV's market: business travelers.

Consumers weigh the hassle and expense, not just the price of flights, when they consider driving to a more distant airport, Richards pointed out. They also care about reliability.

That expectation is part of the reason Longo and Richards have lobbied the airlines for bigger planes for at least two years. They intensified their campaign after a stretch in 2016 when multiple flights on smaller planes were canceled due to storms or scheduling jams, causing travel nightmares.

Bigger flights are less likely to be canceled because it's usually more cost-effective to scrub a flight with fewer passengers. And consumers prefer larger, roomier planes.

But the relatively small size of Burlington's customer base made it difficult to attract the larger planes needed to alleviate the sardine effect. No matter how many times Richards extolled the easy-to-navigate convenience of Burlington's small airport, airlines were skeptical about filling jumbo planes.

Nationally, many airlines invested in regional jets in the late 1990s and early 2000s to give them the flexibility to service airports of varying sizes. But around 2014, the industry grew less enamored of them due to rising fuel costs and consumer complaints about cramped conditions.

As a result, bigger planes are drawing bigger crowds, especially early in the day, the busiest time at BTV. Last Thursday morning, about 900 people boarded 13 flights that departed between 5:30 and 7:30 a.m.

By 7 a.m., the rush was over, and lines to get through the airport's two security checkpoints were no more than 12 customers deep. Drowsy travelers wheeled their suitcases through the terminal. A TSA officer led a docile bomb-sniffing canine outfitted in a vest marked, "Do not pet."

Suzanne Whitaker of Hinesburg was heading to New York City with several colleagues on business for the day. The size of a plane doesn't really matter to her, and she continues to view Burlington's airport as "zero-hassle" compared to others.

But other travelers said they have a clear preference. "Typically, I do like the bigger ones. They don't feel as bouncy," said Mark Downs, as he bought snack-size packages of Cabot cheese in the gift shop before flying back home to Austin, Texas.

Ashley Woods, a Portland, Ore., resident who flew in to visit friends in Bethel, tries not to book small aircraft.

"I prefer a big plane. It's smoother, and there's usually a little bit more room," she said.

Fees from airline ticket sales help support the airport budget, meaning the current increase is good for the bottom line at the facility, which is owned by the City of Burlington and located in South Burlington.

Queen City Mayor Miro Weinberger said it was "very satisfying" to get the stronger business. He was also happy that Fitch Ratings bumped up BTV's bond rating last month to BBB, an investment grade. The company cited growth in operating revenues and cash reserves, as well as the increase in boardings.

"I feel there's always some uncertainty with the airport and the economy in general," the mayor said. "There's no guarantee it will continue, but it does feel like this is the result of a lot of hard work, and it's very much appreciated and welcome."

In the coming months, the airport will hold public meetings on its master plan, which it is updating with funding from a $1.2 million grant. Everything from the size of the terminal to the contours of the main runway and a smaller, secondary runway (used mostly by private planes) will be studied. The relative efficiency of the TSA security checkpoints will also be analyzed.

Recent work includes further automation of the 2,100-car parking garage. Drivers can now pay their parking tab at a machine inside the terminal, for example, and hold the receipt to a scanner from the car window as they exit the garage.

Bigger changes are coming next year. Private developers who signed a ground lease with the airport want to start construction in the spring on a five-story, 105-room hotel just south of the garage. The project is in the preliminary evaluation stage before the South Burlington Development Review Board. If approved, it will have a restaurant, a bar and a sky bridge to the garage. Airport officials anticipate that many guests will stay just one night and walk across the street for 4:30 a.m. flight check-ins.

The other big shift in 2019 involves the arrival of the F-35 jets at the Vermont Air National Guard terminal across the airfield from BTV's commercial terminal. By April, the guard will phase out its F-16s; in the fall, the first of the F-35s are scheduled to arrive. In preparation, the guard is spending more than $75 million on taxiway, terminal and other improvements.

The siting of the noisy new jets has proven deeply controversial. Weinberger has staunchly supported the planes and declined to sign a city council resolution in April calling for an alternative.

Looking ahead at commercial flights, it would be great for BTV to expand its horizons, Weinberger said. "The number of cities that the airport flies to is one of the things the public cares most about," he said. "We would love to a see a restoration of Boston service someday. It would be outstanding if we could add direct service to Denver."

Richards and Longo agree with the mayor, especially when it comes to reviving Beantown-bound flights. They ceased around 2005, and it's been difficult to convince airlines to bring them back. The current pitch is to sell airlines on the idea that they can overnight their planes more cheaply in Burlington than at the crowded Logan International Airport airfield.

"Boston is our most leaked airport," explained Longo, using an industry term for lost business. "Our real, real goal is to get a direct flight to Boston."