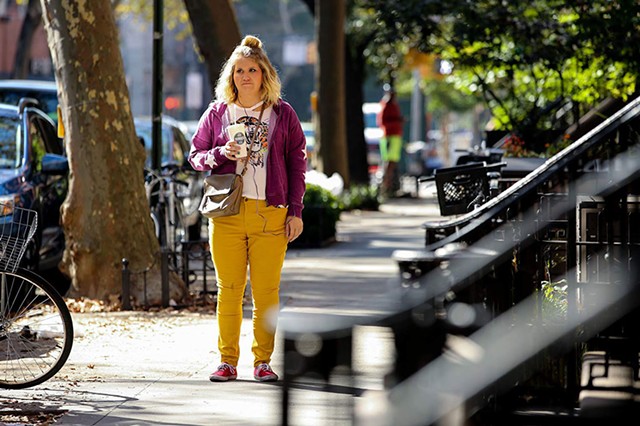 What does a secular inspirational film for millennials look like? Probably a lot like Brittany Runs a Marathon. Writer and first-time director Paul Downs Colaizzo crafted this feel-good indie comedy from the true story of a roommate who transformed herself from couch potato to serious runner. Although the title spoils the upbeat ending — yes, Brittany will run a marathon — her journey sometimes shows a surprisingly dark side.

Twenty-eight-year-old Brittany (Jillian Bell) has a wide, goofy smile and nervous, close-set eyes. Underemployed at a New York City theater company, she cracks jokes compulsively, punctuating her patter with forays into a broad Cockney accent. To her friends, especially her sleek Instagram influencer roommate (Alice Lee), she's the party girl, the fun girl. And that role is inextricable from being "the fat girl."

If the movie were primarily about Brittany dropping 40 pounds, it would be derided as retro in today's mediascape, and rightly so. Colaizzo steers clear of the body shaming of so many comedies past, focusing instead on Brittany's mental and physical well-being. The doctor (Patch Darragh) who gives her a wake-up call is careful to note that people at her BMI can be active and healthy. She just isn't one of them.

As for Brittany's inner landscape, we don't see past her hard shell of comic self-deprecation until she gets her life in order. An athletic neighbor (Michaela Watkins) coaxes her to join a running group. Soon Brittany has a new goal of finishing the New York City Marathon, and she ditches her toxic friends, sheds pounds and starts looking for love. Colaizzo wrings rom-com laughs from a scenario in which she takes dating lessons from an impish man-child (Utkarsh Ambudkar) whom she meets in the course of an unlikely house-sitting gig.

But the movie gets less cutesy as Brittany's long-standing insecurities creep into the daylight. Setbacks in her progress unleash the hostility — toward others and herself — that hides behind her happy-go-lucky persona. "People love fat people when we're being funny," she notes caustically. It's one of several raw moments that show us Brittany hasn't vanquished her real enemy: self-hatred. While that's partly a function of how others have treated her, it doesn't vanish when they begin treating her differently.

Despite its title, Brittany Runs a Marathon doesn't devote much screen time to running. Mercifully, it features no Chariots of Fire-style montages of either the serious or the parodic variety. Taking place mostly in cramped apartment interiors, this is a new-style rom-com, complete with a few creaky contrivances. (The shallow roommate, for instance, is supposedly Brittany's best friend, yet they lack a natural rapport.) For the most part, though, Colaizzo delivers a solid low-key comedy of manners in the naturalistic vein of The Big Sick, with the characters bonding over their dysfunctional family histories and general unfitness for adulting.

Bell's performance holds it all together. If she's sometimes borderline obnoxious as a ditzy smartmouth, the layers she reveals put Brittany's attention-seeking in a new light. Watkins is also affecting as the older running mentor who isn't as perfect as she initially seems.

Where Christian inspirational flicks offer the prescription of prayer, this one offers familiar life hacks such as "one tiny step at a time." Brittany's first, flailing run around the block makes it possible for her to complete a marathon, and the marathon itself is just a first step. While the ending may strike a slightly too triumphant note, most of the movie's good feelings are earned.