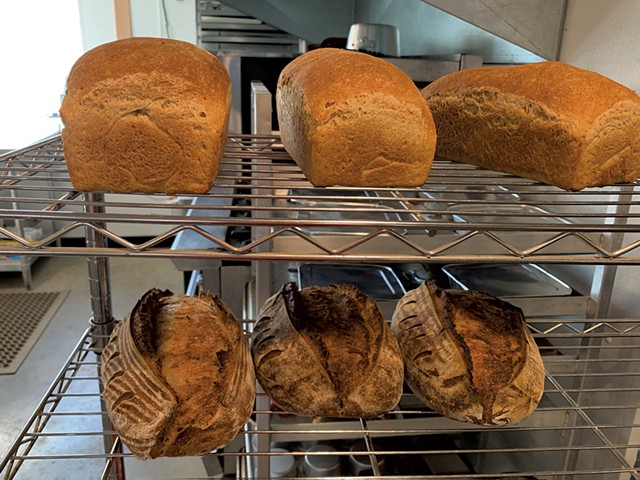 An increasing number of Vermont bread bakers use locally grown, freshly milled flour. But, as far as she knows, Elizabeth Trostel is the only one in the state using pedal power to mill some of her grain.

Trostel, 38, has been a professional baker for about 15 years, but she'd never biked much — until recently. "I have a bike," she said. "I've been on the causeway once."

The New Hampshire native first moved to Vermont to attend the University of Vermont. She moved west for several years and then returned in 2016 with her girlfriend, who's now her wife. 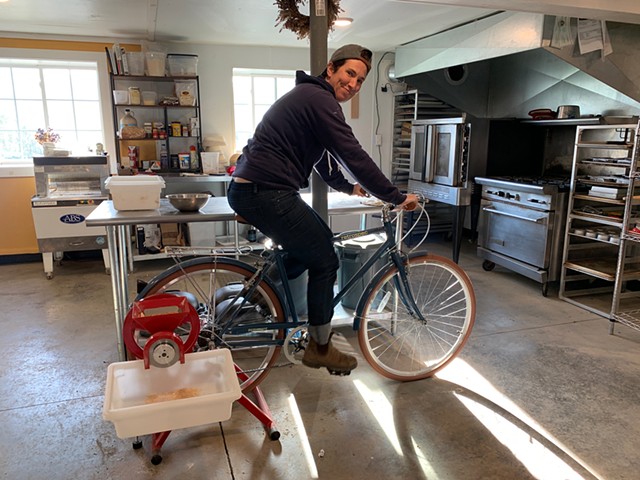 In November 2021, Trostel started her tiny Bicycle Mill Baking in a shared kitchen space at New Leaf Organics farm in Bristol. So far, she has sold her small batches of bread, pastries, granola and some prepared foods at New Leaf's farmstand on Bristol Road. Bicycle Mill Baking is also a new vendor this year at the Richmond Farmers Market.

Trostel still works four days a week at Burlington's August First bakery and café, where she is general manager. "I just don't sleep a lot," she said.

By about 7 a.m. on a recent Friday morning, dark, crusty loaves of sourdough made with 40 percent freshly milled grain were curing on a wire rack. The bread is named Walter in honor of Trostel's late father, a serious baking hobbyist whose sourdough starter she still uses. "It's like keeping a little piece of him," Trostel said. 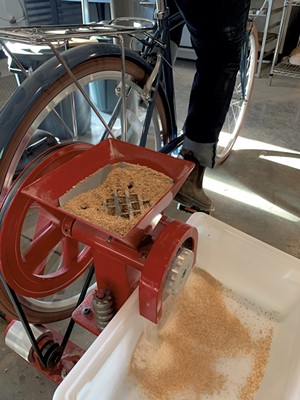 Later that morning, she baked soft but hearty sandwich loaves made with 50 percent freshly milled kamut, an ancient wheat variety.

There are several benefits to just-milled grain, Trostel said. "The flavor of flour degrades quickly," she explained, particularly that of whole-grain flours, which contain more oils. Milling her own flour also permits Trostel to work with less common grains, such as kamut, that some people seem to tolerate better than modern strains of wheat.

Trostel initially bought a hand-cranked mill, "but that was too hard," she said. She could've bought a motor to run it but instead opted for a kit that allowed her to power the mill by bike. "I like to do everything the long way," she said with a chuckle.

During downtime while her dough is resting, rising or baking, Trostel hops onto a standard road bike set up in a stationary trainer with the mill attached to the back wheel.

She tips a bowl of whole grain kernels, known as berries, into the cherry-red funnel at the top of the mill, adjusts the grinding burrs, climbs on and starts pedaling. But the miller cannot speed with abandon, Trostel cautioned. "If you pedal too fast, the oil in the grain heats up, and you get off flavors," she said.

The bicycle mill may not prove super efficient as Trostel scales up her business, but she expects it will continue to play a role, including guest appearances at the farmers market.

"It's a fun way to get other people interested in what I'm interested in," she said. "You could have loaves that were 100 percent community milled."

Though Trostel doesn't track her mileage, the exercise is "good for me," she added. It might also lead to another new business, she joked: "Someday I'll invite you to my bicycle mill spin studio."

The original print version of this article was headlined "Flour Pedals"