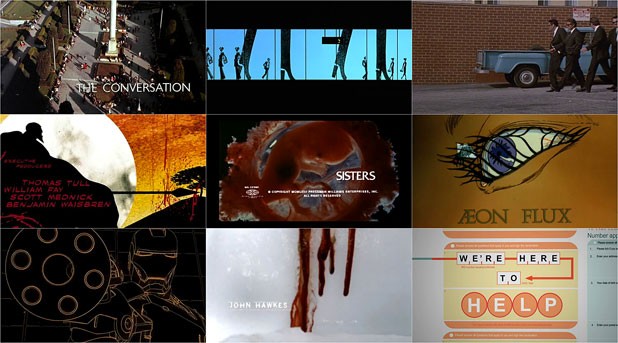 Has a James Bond movie ever been as cool as its title sequence? We’ve all felt the letdown when the 90 minutes that follow a film’s credits don’t live up to the cleverness of the opening two or three.

Unlike film directors, the artists who create innovative title sequences don’t get much recognition outside the industry. But now there’s a blog devoted to their work, the brainchild of Ian Albinson of Bristol and his Boston colleague Alexander Ulloa. At Artofthetitle.com, they’ve posted dozens of title sequences, from To Kill a Mockingbird to Se7en to “Lost” to the cult Lars von Trier TV series “Riget.” The clips are indexed alphabetically and can be watched as crystal-clear QuickTime files.

“Remember when your heart sank just a little when you realized the Pink Panther movie wasn’t a cartoon?” asks Art of the Title’s homepage, referring to the animated bits that preceded the Sellers farces. And clearly Albinson and Ulloa aren’t the only title-sequence fans out there. Since it went live in December 2007, their blog has been written up in various places, including The Boston Globe. From 85 page views in a month, it’s jumped to as many as 183,000 (last August).

Raised in California and the U.K., where he studied graphic design, film and TV production, 33-year-old Albinson relocated to Vermont a year ago from Boston. (His parents live here, he says, and he’s worked for Middlebury College in media services.) Until recently, he helped produce multimedia for science teachers at Boston’s Harvard-Smithsonian Center for Astrophysics. A lifelong movie lover, “I started collecting materials as resources for myself as a designer,” Albinson says. Digital technology allowed him to examine classic film title sequences frame by frame.

When he posted his favorites online, he “got some enthusiastic responses,” he says. “Someone posted it to a popular site, and it just took off.” But because his own “writing style was pretty minimal,” Albinson enlisted his friend Ulloa to contribute commentary. “[T]he end titles for Max Payne feature a locked-and-loaded font worthy of Thor that has you in its sights like a well-oiled Reagan-era actioner,” reads an October 28 entry.

Part of the fun of browsing Art of the Title is that it uncovers pockets of exciting work in forgettable films. For instance, who would have guessed that the cloying kids’ fantasy Mr. Magorium’s Wonder Emporium starts with a clever, Pop Art-y animation sequence? Or that the titles of Panic Room are, as one commenter on the site put it, the “most memorable part of the movie”?

“There are some films that everyone recognizes are terrible films but have great title sequences,” says Albinson. “It’s a shame. The other company seems to get it more than the filmmaker sometimes.”

When he started posting titles, “My main worry was copyright,” Albinson says. Though the doctrine of fair use remains frustratingly vague on the Internet, Albinson hasn’t been asked to take his content down. Just the opposite: “We got a bunch of people approaching us from the companies that actually made these sequences,” he says. Studios — including many outside the U.S. — have offered up their work, eager for the exposure. And Ulloa and Albinson have started conducting interviews with artists such as Richard Morrison, who discusses the credits he created for six films, including Brazil, Batman and High Fidelity.

The average movie geek can rattle off the directors of those three films, but perhaps not what they have in common. Art of the Title offers a new perspective. Says Albinson, “Everybody’s excited that there’s a forum where this kind of art can be seen.”