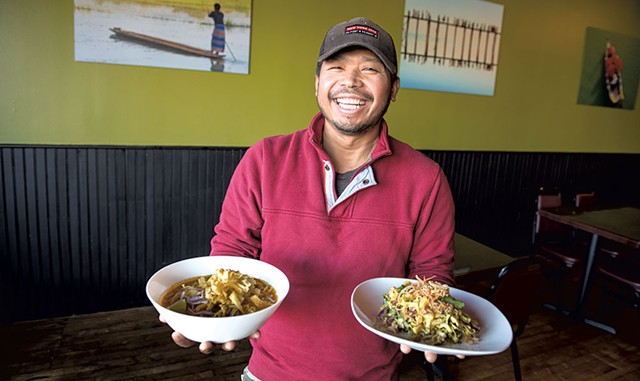 I first fell for fermented tea leaf salad at a Burmese restaurant 13 years ago. The staple from the Southeast Asian country also known as Myanmar exploded in my mouth with salinity and tang; abundant crunch from roasted legumes and seeds; pungent, crisp garlic shards; and sparks of chile. Everything orbited around the umami-bomb star: earthy, mushroomy fermented tea leaves.

That meal was in New Zealand. Although 2018 brought the Burmese eatery Moonwink to Manchester, it would be years before I tasted tea leaf salad again.

Happily, as of November 2021, I can satisfy my craving much closer to home. That's when Nepali Kitchen, at 10 Railroad Avenue in Essex Junction, became Irrawaddy and began supplementing its Nepali offerings with dishes from Burma.

Htun Sein, a Burmese native, bought the restaurant in February 2020. When he expanded the menu, he renamed it in honor of his homeland's largest river. "It is the backbone of the country," Sein said.

Sein, 36, landed in Barre in 2003 as a high school exchange student. He later applied for political asylum to escape Burma's long civil war, which has recently escalated.

Sein worked for a decade as a Vermont Refugee Resettlement Program case manager and interpreter before buying Nepali Kitchen. The timing of his purchase was not ideal, but he has managed with takeout and plans to bring back seated dining by late spring.

The chef-owner called Burmese food "a mix between Thai and Indian," two of the country's neighbors. The first of those areas of overlap is represented by Irrawaddy's coconut milk-based curries, such as a rich, creamy pumpkin curry ($14); the second, by its crisp chicken-and-herb samosas with a slurpable tamarind sauce ($7 for three). The rich chicken-and-noodle stew called ohno khauk swei ($14) is similar in its pronunciation and recipe to Thai khao soi.

"We use a lot of fresh spices and chiles, almost zero dairy, and a lot of lime juice," Sein said. "Our food is sweet and sour and hot, with a lot of crunchy stuff."

Tea leaf salad ($9) is among the uniquely Burmese thoke, or salads that are often tossed together from many finely chopped ingredients. More substantial thoke feature noodles, such as kyar zan thoke ($15), made with delightfully tooth-resistant mung bean glass noodles and a light, garlicky lime dressing.

Sein called tea leaf salad "the most authentic home taste you can find. Everyone in Burma eats it any time of day." Non-natives "either love it or hate it," he said with a grin.

I'll take one of each.