In Bethel, tensions still simmer in the wake of Irene 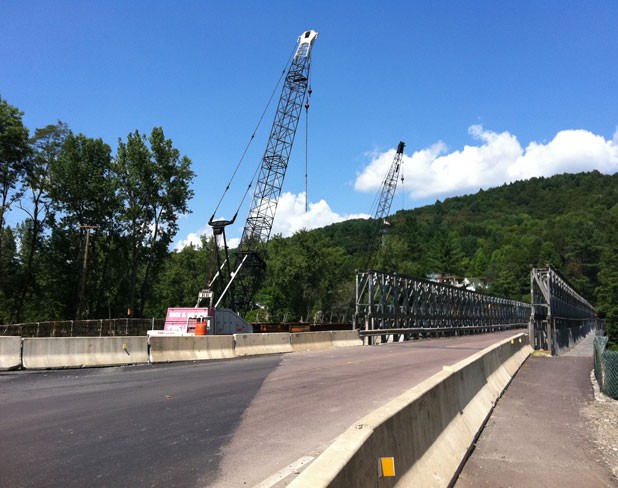 It wasn’t the roads or flood-ravaged homes that proved hardest to repair in Bethel. A year after Tropical Storm Irene pummeled this town of 2030 residents, the signs of recovery are remarkable: Down on hard-hit River Street, visitors can hear the hum of construction crews overhauling homes gutted by the rising White River. Nearby, a road crew is constructing a permanent bridge to span that once-raging waterway.

But some fractures are proving more difficult to patch. In Bethel, residents are still smarting from a small-town spat that escalated into a full-blown feud in the weeks and months after disaster struck, pitting local officials against upstart volunteers.

Town officials accuse some volunteers of ignoring the “chain of command.” Volunteers say the town fathers were defensive and petty, and let neighbors suffer as a result. While stories of heartwarming unity and neighborly goodwill spilled out of surrounding communities, this town shouldered headlines such as “Bitterness in Bethel.” Irene, concluded one report from the National Public Radio show “State of the Re:Union,” left Bethel “a town divided.”

When the storm struck, small-town politics were far from the minds of Bethel residents. They were busy fighting or fleeing the rising waters.

On August 28, Carla Hodgdon and her husband watched the flood hit the trailer park opposite their Pleasant Street home, then creep up their cellar stairs. The water eventually seeped through their hardwood floors, bringing filthy black slime; when they were wading through knee-high water, the Hodgdons retreated upstairs.

On Cleveland Brook Road, state Sen. Dick McCormack (D-Windsor) and his wife were frantically working to save their home from downhill-rushing torrents. The couple improvised a dam, setting up cement blocks in the yard — a tactic that worked for all of 20 minutes, McCormack says, but did create a culvert that spared the house. McCormack fretted that his wife was overexerting herself, telling her that hauling cement blocks was “men’s work.” She retorted: “When you’re about to lose your house, it’s women’s work.”

On Gilead Brook Road, Sandy Levesque watched water rush into her basement — but “everyone had that,” she later learned, and she and her husband bailed themselves out. “What I remember most, what I will always remember most about the storm, was the sound of it,” she says. The storm made a crashing, terrible sound — “like a train running through,” agrees Hodgdon — caused by boulders and river rocks and huge trees careening along rivers and brooks swelled to five or six times their usual width.

At the height of the storm, Levesque walked with her neighbors up their ravaged road. She didn’t bring a camera, but she’s glad of that now. “I don’t want to have those images with me.”

It was when the worst of the storm had passed that Bethel began to take stock. Town officials set up a temporary emergency shelter at the elementary school. Three days after the storm, town manager Del Cloud called Levesque, who’d offered to help. He asked her to come down to the newly renovated town hall, man the single telephone and set up an emergency response center.

“He opened the town hall and gave me the key … and the phone started ringing,” Levesque remembers. At first she worked alone, but in between fielding phone calls, she rang up friends and neighbors. By the end of the day, they had a small volunteer corps at the ready. The volunteers set up whiteboards and began assessing the situation in town.

After a week, Levesque had to get back to her regular job, so she handed over the keys to another volunteer coordinator. Levesque isn’t exactly sure what happened next — she calls it a “breakdown in communication.” During her own time with the volunteer corps, she recalls “seamless” cooperation between the volunteers and the town government.

“I’m not a Pollyanna, but I can tell you, it was an entirely positive experience for me,” Levesque says. “I was really sad to have it go south. I thought the community really was working well together.”

That didn’t last. First came a spat over telephones at the town hall; volunteers wanted more phone lines and internet hookups to undertake a proper “needs assessment” of the town. McCormack says Cloud refused — and that, when McCormack went to the town manager to discuss the issue further, “he actually threw me out of his office.”

McCormack called Gov. Peter Shumlin’s office and, as the story goes, the governor arranged for the installation of additional phone lines. After that, the story keeps changing: In one version, Cloud canceled the work order. In another, it was a secretary at the town offices who nixed the phone installation.

“One way or another, they never got the computers or phones,” says McCormack. Suddenly politics had entered the debate. Democrats were on one side, including McCormack and Church Street resident Ola O’Dell, an outspoken 80-year-old who has two stints in the Peace Corps under her belt. Republican town fathers were on the other, accusing McCormack and company of politicizing the disaster and stirring up controversy.

Then tensions escalated even further. About three weeks after the flood, O’Dell (whose personalized license plate reads “DMOCRAT”) was working at the volunteer center when Cloud arrived at the town hall around noon.

“They told us we had to be out at five o’clock,” O’Dell says — an ultimatum that left the volunteers frantically scrambling to relocate truckloads of donated goods and clothing. Cloud says the town needed the hall for a Federal Emergency Management Agency meeting place.

How did this strife look to townspeople who weren’t directly involved? David Sambor owns the Bethel Village Sandwich Shop, which became a natural gathering point in the village after the storm. “People were coming out of the hills and funneling into town,” he remembers.

A year later, “I have really mixed feelings about how the town handled things,” Sambor says delicately. Though the roads are in better shape than they’ve ever been — a feat Sambor credits to the town officials and tireless road crews — “they kind of forgot about the people,” Sambor says. He thinks politics got in the way: “There’s a good ol’ boy network in this town. You’re either one of them, or you’re not.”

When volunteers and outspoken residents began pushing back, onlookers say, the town fathers reacted defensively. One concern repeatedly raised by volunteers and some flood victims was that Bethel never held a town meeting of the sort that became common in neighboring towns.

Cloud staunchly defends the town’s actions. Meetings were happening regularly, he says — among officials. He calls Bethel’s emergency-action plan adequate, and suggests that towns that held frequent citizens meetings weren’t facing Bethel’s degree of devastation. “We didn’t have the luxury of time,” he says.

Cloud chalks up much of the “disarray” that the media documented in Bethel to individual residents, not town leadership. “A lot of the individuals failed to prepare themselves properly, despite the warnings that were issued,” he says. As for the volunteers, Cloud says town officers were grateful for their help, but some overstepped their bounds.

“The problem seems to have been that there were some that didn’t understand the chain of command,” Cloud says. “If that chain of command isn’t honored, it causes havoc. Those people that were working at cross-purposes to appropriate response efforts were nothing but in the way.”

A year out, it’s hard to make sense of Bethel’s he-said, she-said debate. McCormack says, “There are people that to this day are hurt and confused as to why the town fathers were as hostile to their town as they were.”

O’Dell sighs when asked about the fallout. “I don’t think we’ll ever get over that,” she says.

Bethel’s tensions were stirred up again just last week, when the selectboard tentatively decided to take FEMA funds that could have been used to rebuild a bridge on Old Route 12 and allocate them to another project, such as rebuilding the town garage. Some jaded residents say it’s the latest example of the town’s insensitivity to residents hardest hit by the storm.

But both sides can agree on one thing: It’s time to move on.

“I hope we’ll have a ‘kumbaya’ moment,” says McCormack — though he can’t resist pointing out that, with selectmen up for reelection in 2013 and 2014, voters will have another chance to “clean up the selectboard.” (The town already voted out one selectman in March.)

Hodgdon, a selectboard supporter, is more blunt in her assessment. “There is still a core group that I don’t believe has gotten over it,” she says. “Others in town have gotten a lot better about saying, ‘You know, that’s the past … We’re trying to move forward, so either get in step with the rest of the world, or go back in your corner and keep crying.’”

Bethel residents also agree that they’d like the media to stop portraying their community as a town divided.

“I do understand why the fractiousness got as much attention as it did,” says McCormack — who, unlike Cloud, does not believe the media “behaved badly” in reporting on Bethel’s woes. “It’s fascinating. It’s so out of character with the rest of the state.”

But it’s also unfortunate, McCormack says, that the good was overlooked. “Mainly what went on in Bethel after the flood was a real spirit of neighborliness, the town fathers notwithstanding,” he says. “People really did pull together.”

Sounds like it’s time for Bethel to pull together once more.