With its beer-pairing dinners, the Daily Planet goes way beyond suds 'n' spuds 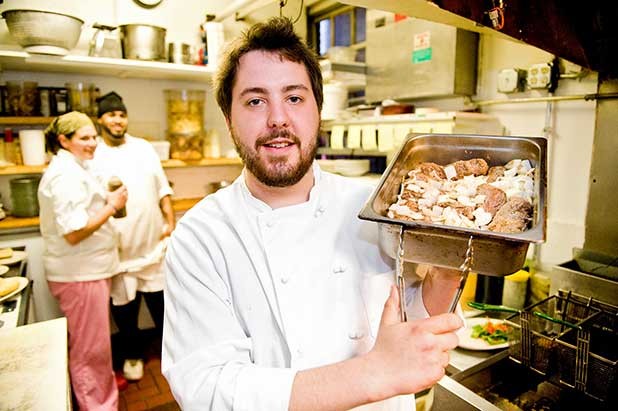 When it opened 26 years ago, the Daily Planet was one of the most exciting restaurants in Burlington. With funky decor, cuisine that veered from Thai to traditional New England, and a casually elegant vibe, the eatery drew a big following to its bar and two dining rooms. Long-time fans still refer to their favorite dishes, such as "Maura's Fabulous Salad," by name.

But there's no name yet for an outré concoction the Planet served up at dinner on August 17: vanilla ice cream rolled in deeply caramelized onions and served atop a gorgonzola-stuffed baked apple, alongside a glass of hard cider.

Say what? The unusual sweet-and-savory dessert won't show up on the Planet's menu every night, but it was a memorable finale to the resto's most recent special pairing dinner, where microbrews rubbed shoulders with eclectic fare. Every month, the Planet teams up with a nearby brewery to offer course after course of classic, unusual and sometimes straight-up ballsy combinations. The August 17 event matched five courses and an amuse-bouche with swigs from Harpoon Brewery, which is headquartered in Boston but boasts a second location in Windsor, Vermont. Past dinners have included offerings from Rock Art in Morrisville, McNeill's Brewery in Brattleboro and Québec's Unibroue.

An expert from the chosen brewery addresses the crowd between courses, sharing tidbits about hops prices, upcoming products and the accompanying food. Like several attendees at Sunday's event, Harpoon's Head Brewer, Scott Shirley, was uncertain about the weird dessert: "I call the onions in the ice cream 'brave,'" he said, laughing.

The Planet is the first place in town to host such dinners on a regular basis. For Copey Houghton, owner since 1992, showcasing the newly popular art of matching beer and food is part of a concerted strategy to put his eatery back at the top of the food chain. Since its boom years, the Planet has experienced chef turnover and some ups and downs. In the online comments section of the 7 Nights Guide to Restaurants and Bars, patrons have lamented its inconsistency. "The bold flavors and daring spices have declined into cream sauces and light seasonings," said one disappointed soul in July 2007. "Get it together, Planet. You have so much potential," a fan urged last December.

The Planet's management has taken notice. "It got stagnant over the years," Houghton admits. Over the last year and a half, he's shaken things up by hiring a team of fresh young staffers - Manager Kristi Cook, 28, and co-chefs Bryan Lantagne, 26, and Tyler Lewis, 23. "They're very innovative, full of spunk and the energy that's needed for what the Daily Planet is," Houghton says. "It's really starting to show."

Money talks: "Most restaurants aren't doing the bang-up numbers they used to," Houghton dishes, "and we're up." Another good sign: After another pairing dinner with Rock Art Brewery, the chefs got a standing ovation.

Although pairing beer and food can be as easy as popping a can of Bud to go with a burger and fries, creating memorable brew 'n' chew combos takes more work. Like the experts who orchestrate wine pairings, experienced beer matchers often seek flavors in a brew to complement a given dish - say, matching a sweet, nutty brown ale with a maple-walnut cake. Another approach involves contrasting the imbibables and the comestibles: Spicy curries are a natural counterpoint to bitter, hoppy IPAs.

So I could see the process firsthand, Kristi Cook invited me to sit in as she and the Planet chefs went from sipping glasses of Kölsch-style summer beer - so mild in flavor it's barely there - to pouring it for 21 hungry patrons. At the August 17 dinner, the slightly citrus-y beer paired beautifully with tuna sashimi over a mound of peppercorn-paste-smeared lemon rice, surrounded by a moat of bitter cucumber soup. Such ideas don't spring fully formed from a chef's toque. It took a meeting, a trial run and lots of side conversations to go from a sampler of Harpoon's offerings to a slew of successful matches.

That initial meeting took place nearly two months before the dinner. Unlike most business gatherings, it involved a six-pack, a handful of off-color jokes and some really strange finger foods.

"We'll write the menu today," Cook explained. The idea was to sample each of the beers, roughly arranged from lightest to darkest, and decide which flavors would go well with each. At the end, the team knocked its least favorite beers off the list, now pared down to a half-dozen.

One would serve as a "reception" refreshment, along with some cheese or a light snack, while the others would accompany the dinner's five courses. "We all taste the beer, read what [the brewery] suggests [as a pairing] and then run with it," Lantagne explained. "We try to do things that are a little different, things people wouldn't normally do."

Plenty of novel notions were inspired by the hint of banana flavor in Harpoon's UFO Hefeweizen, a golden wheat beer.

"I like bananas and peanut butter. What about peanut noodles?" Cook suggested.

Lewis nixed that: "I think peanut butter would be difficult. It would coat your palate and mask what's going on."

"I see where you're going with that," mused Lantagne. "We could brown up peanuts with bananas and deep-fry them."

After a few more rounds of discussion, the group reached a consensus: They'd match the wheat beer with a salad of spicy greens in coconut lime dressing, topped with banana and peanut "croutons."

The rich Munich Dark sent Lewis trotting to the bar after some candied walnuts, which everyone agreed were complementary. "Walnut, sausage, mushroom and cream?" Cook offered. That conversation resulted in big fat ravioli stuffed with sausage, 'shrooms and nuts, topped with a cream sauce.

Two hours later the beer was gone, and the table was littered with dishes of candied walnuts, lemon and lime rinds, and blue cheese crumbles. (Does cider pair better with local Gorgonzola or a milder supermarket version? The only way to find out is to sample it with both.) Now it was time to take the team's concepts and try them out in the kitchen.

At lunchtime on a sleepy, sunny Wednesday in mid-July, Lewis and Lantagne came in early to churn out a trial run of the entire meal, set for five. Houghton and Cook chatted about how to keep costs down and value up while the two chefs ran back and forth between the table and the stove, cooking, plating and eating.

All the dishes came out well, with only a few tweaks requested. Houghton asked the chefs to add more coconut to the salad dressing, but adored the fruity "croutons." "I think the banana is by far the best thing in this dish," he raved.

A mustard-green salad served with the sashimi didn't fare as well - judged a bitter distraction, it was eliminated from the final version. The ravioli filling brought out the best in the Munich Dark, but sprinkles of nutmeg, added tableside, were unanimously voted an improvement.

The final savory course, lamb loin glazed with ginger, sesame and maple and served with turnips, sweet potatoes and baby corn, was just about perfect. "I wouldn't do much with this," Houghton said happily.

All this work came to fruition on the night of the dinner, when guests were greeted with glasses of raspberry wheat beer and found tiny tarts, made of truffle-oil-drizzled phyllo dough, salmon and prosciutto, awaiting them tableside. Attendees ranged from long-time fans of the Planet to a couple who recently relocated from Omaha to take positions at Fletcher Allen. While everybody sipped the beer, Harpoon's Shirley rose for an introduction: "The menu looks really wonderful," he opined. "I'm excited about many of these pairings."

So was everybody else. The "fried banana salad" earned special praise for its creativity. The lamb loin was tender and sweet, perfect with the nutty Brown "Session" Ale. At the end, when the chefs came out to greet the crowd, they met a hearty round of applause.

"How did you come up with ice cream rolled in caramelized onions?" one bemused customer asked.