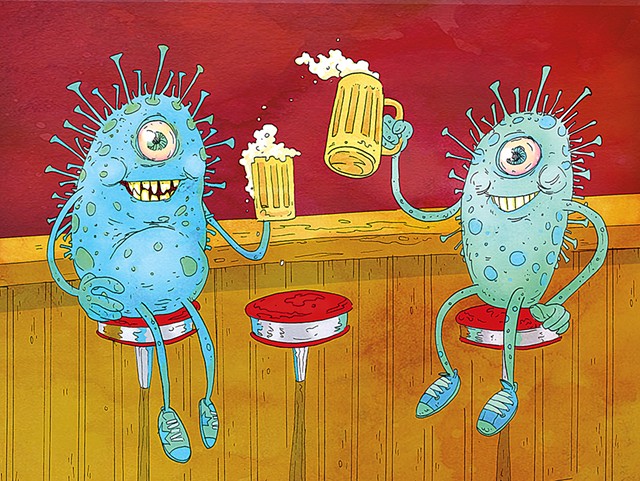 Golden liquid and barley swirled in a copper-colored vat at Switchback Brewing. But on this day in August, cofounder Bill Cherry had his eye on what wasn't going to be made into beer.

He peered out the window at an inconspicuous army-green tank behind the Burlington plant. It held not the local brew but a wastewater by-product, slightly sweetened from the used grains. The liquid typically contains nearly 2 percent sugar, Cherry said, making it much more difficult — and more expensive — for the city to treat than what flows down the drain in homes.

Cherry is taking steps to divert as much as he can from the city's wastewater treatment system. But Burlington officials say it's still not enough. They want the city's eight breweries and sole cidery to do more to help combat the sewage spills plaguing Lake Champlain.

It turns out that Burlington's brewing bonanza has been taking an invisible toll on the wastewater system. Leftovers from the brewing process — some barley, hops and yeast, plus thousands of gallons of water — end up at the municipal sewage plant. The sugary mix has overloaded the system with carbon and altered what was once a well-balanced diet for the microorganisms that help digest the waste. When storms hit or the filtration system fails, the water that overflows into the lake is dirty — or, at least, dirtier than it would be if the microbes were doing their job properly.

Both the brewers and the city are aware that there's an issue. Officials have been working on a brewery wastewater plan for more than two years, according to city water resources director Megan Moir, but early on, "it was important but not urgent."

It became urgent after 1.8 million gallons of dirty water flowed into the lake during three days in June. Days afterward, Martin Lee, a water resources engineer for the Department of Public Works, set up a meeting with Burlington's three largest beverage makers — Switchback, Zero Gravity Craft Brewery and Citizen Cider, according to emails that Seven Days obtained through a public records request.

"In light of recent wastewater treatment violations at our main wastewater plant," Lee wrote, "[o]ne of the actions we are taking is reaching out to you regarding pollution prevention practices."

At the mid-June meeting, they discussed initial steps: To start, the city would order devices to monitor how much waste each brewery releases. The breweries plan to install those this fall.

The city has installed three meters — and will soon install a fourth — in the wastewater plant's overflow pipes to measure how much dirty water is released into the lake, including how much is sewage and how much is stormwater.

Officials will also ask voters to approve a $30 million bond to cover a variety of upgrades, including new pumps and collection systems, a computer system and planning studies. Pending approval from the Burlington City Council, it could go before voters as early as November.

All told, the city has discharged more than 11.2 million gallons of partially disinfected wastewater this year, more than four times last year's amount. City officials have blamed torrential rains that overwhelmed the system; a valve that broke in April; a pipe that clogged in May; and a computer control system shutdown in July.

Outraged residents have vented on social media, and a lone protester held up a sign during rush-hour traffic that read, "Burlington stop dumping shit into our lake."

Since the beginning of the year, Public Works has hired three consultants to tackle wastewater problems, including one specifically to investigate concerns about breweries. The consultant spent a week in early August visiting suds-makers and was to submit recommendations to the city by the end of that month.

Breweries account for just 1 percent of the roughly 4 million gallons that the wastewater plant processes each day. But they pay a surcharge to cover the city's additional treatment cost.

The city is also planning to implement a new set of rules for cideries and breweries — a proposal that was originally drafted and sent to brewers in January, city emails show.

Small operations, including Foam Brewers on the downtown waterfront and Simple Roots Brewing in the New North End, would be required to submit a pollution prevention plan to Public Works; separate and collect spent hops, grain and yeast left over from the beer-making process; and use cleaners without phosphates, which are particularly hard on the wastewater treatment process.

In addition to those steps, medium-size facilities, such as Switchback, Citizen Cider and Zero Gravity, would also be required to install equipment to sample and record the wastewater they discharge.

Burlington doesn't have any of what the city would consider to be large breweries — at least not yet. But the city's proposed rules would require large brewers to install their own water-filtration systems — an "extremely expensive" fix, according to Avery Schwenk, president of the Vermont Brewers Association and co-owner of Hermit Thrush Brewery in Brattleboro.

Until now, some Burlington brewers have gotten by without the wastewater expenses of beer-makers elsewhere in Vermont.

Breweries that use more than 5 percent of the treatment capacity of a municipality's wastewater system must apply for a state permit and treat their own wastewater, said Jessica Bulova, supervisor of the wastewater program for the state Department of Environmental Conservation. That's more common in smaller towns that have less wastewater treatment capacity, she added. Fiddlehead Brewing in Shelburne installed its own water treatment system, as did the Alchemist in Stowe.

When Magic Hat Brewing started butting up against the waste limits in South Burlington in 2007, the company partnered with a private company, PurposeEnergy, to build a digester, said Harry Kahn, Magic Hat's brand manager. Now, Magic Hat feeds the digester the brewery's used barley and wastewater. It processes the waste and, in turn, generates electricity and steam energy to help power the plant.

"We've set goals to be mindful of wastewater," Kahn said. "That's how we evaluate our success."

The Department of Environmental Conservation is investigating Burlington's most recent spills to consider whether violations occurred and whether fines against the city are necessary. The results aren't yet known, so Bulova couldn't say for certain how much the breweries have contributed to the overflow problem.

Brewers have long understood that their waste poses a challenge to municipal wastewater systems. But even though new breweries have sprung up and existing ones have expanded, they were surprised that Burlington officials called them out after the overflows this year.

"It came out of nowhere," said Gretchen Langfeldt, plant engineer for Switchback, which has operated in the city since 2002.

Justin McCarthy, Zero Gravity's head of brewing operations, acknowledged that his brewery impacts the city sewage system but suggested that the industry may have become a convenient scapegoat. After all, he said, wastewater overflows into Lake Champlain have been happening "for years," he said.

Both of their companies are working with the city, however.

According to Langfeldt, Switchback's Flynn Avenue brewery uses between 10,000 and 12,000 gallons of water a day. About a fifth of that becomes beer. The rest ends up as wastewater — spilled as the beer is transferred from fermenting tank to fermenting tank; schlepped out with the used barley; and, most significantly, used to clean tanks and kegs after each use.

Langfeldt estimated that 3 percent of the wastewater — about 250 gallons a day — contains the sugary remnants of malt.

Switchback has been trying to decrease water use, and for years cofounder Cherry has collected the used barley from his operation and occasionally hauled it to Guillemette Farm in Shelburne as cow feed. In the spring of 2017, Cherry installed the green tank to collect the waste liquid.

A truck driver who had taken the by-product to the farm reported that the cows would come running when he pulled into the barnyard, Langfeldt said. But the disposal method is not ideal.

It's expensive to haul, and in the winter, the liquid could freeze if it's not used immediately. The brewery also produces too much wastewater for the cows at one farm to drink. "Logistically, finding a home for this stuff is sending us in circles," Langfeldt said.

Schwenk, the brewers' association president, worried that Burlington's blame on breweries without hard data to back it up could lead to overregulation.

The city may be "trying to fix a problem that isn't necessarily a problem," he said.

Queen City officials encouraged Citizen Cider to stay in Burlington when the company expanded last year, she pointed out. Devine called the impact on the lake an "unintended consequence" of the industry's growth.

"If we have this issue, I think it's something we need to solve together," she said.

For now, some brewers are ready to invest what it takes.

Cherry said he's already spent about $30,000 to install pumps and equipment to suck the dirty water out of the brewery and into a tank to truck away. He expects to spend at least $100,000 on the changes the city will require.

McCarthy said he anticipates spending about $20,000 in additional equipment and renovations — beyond what he's already put in. That figure doesn't include extra staffing or transportation costs, he said.

"There's all kinds of costs and issues and things coming up unexpectedly. That's the nature of business," he said. "But as brewers, we're invested in the process because the lake's important to us."

McCarthy noted that lake water is used to make the beer, too. "Whether it's fair to us or not," he said, "it's important."