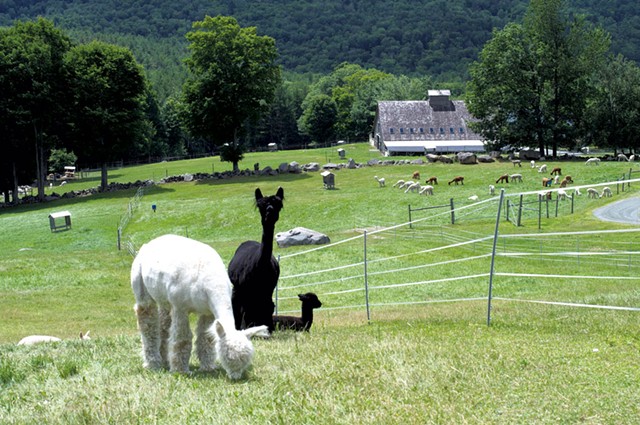 Two weeks before Ian Lutz and Jennifer Croft graduated from Woodstock Union High School, they did what many seniors do — they randomly hooked up. "It was just a fling," Lutz recalls. But the relationship stuck. In college, Croft wrote her thesis abroad in Ecuador — where llamas and alpacas are common — and the couple joked about getting a pair of camelids for their backyard.

Twenty-five years later, the husband-and-wife team own and operate Cas-Cad-Nac Farm, Vermont's largest alpaca operation. Their Weathersfield property spans 600 mostly wooded acres on the south side of Mount Ascutney, where their herd of award-winning animals numbers 200 to 300, depending on the season.

The farm's main business is producing fine alpaca breeding stock. Since the babies — or cria, as they're called — spend 11 months in utero, females bred a year ago are just giving birth now. So summer at the farm means lots of activity on both ends of the reproductive cycle.

In a quiet corner of the barn, Jennifer bottle-feeds 2-day-old Bitsy, who arrived more than a month early. At seven pounds, she's half the weight of a normal newborn. And while most babies toddle to their feet moments after birth, Bitsy can barely stand. Even if she could, the tiny baby can't reach her mother's udder, so the farmers have been feeding her every two hours since she was born. At night, she sleeps in a child's playpen next to their bed.

Bitsy is one of the newest babies in the Cas-Cad-Nac flock, but — assuming she makes it — her value as "seed stock," which is based on the quantity of uniform, fine fleece she'll produce, remains to be seen. Prolific, fine-haired fuzzballs fetch good prices among breeders, but ones that don't make the cut go to fiber farms or hobby farmers seeking fleece-growing pets for a much lower price.

When the economy crashed in 2008, it delivered a hearty blow to Cas-Cad-Nac's business and alpaca markets in general. The Lutzes found themselves with extra nonbreeding alpacas, and locating good homes for them was increasingly difficult. In 2012, they began processing some of their culled livestock for meat. This solved the problem of the excess animals and provided additional income for the farm. "A large part of the decision to use culls for meat was in rethinking our business model," Ian explains, standing in the farm's arena barn while Jennifer performs ultrasounds on pregnant females nearby.

"When we started this [farm], the idea of alpaca as a food source in North America would have been unthinkable," Ian says. "We wouldn't have been against it, necessarily, but it would never have occurred to us."

But as the farmers continue to brainstorm ways to cut costs and increase revenue — Ian admits that they have personally subsidized the farm for the last several years — the 30 to 40 animals they sell annually for meat have proven profitable.

Alpaca meat is deep red, lean and low in cholesterol, yet milder and sweeter than beef. And the Lutzes have put energy into marketing it. Working with chef Jean-Luc Matecat (who recently left the Inn at Weathersfield to open La Puerta Negra in Montpelier), they just finished The Cas-Cad-Nac Farm Cookbook: Vermont-Raised Alpaca, featuring recipes for alpaca chili, barbecued ribs, schnitzels, stews and sauces. Cas-Cad-Nac alpaca is available in steaks and medallions, stew meat, and sausage, among other options. These are available on the farm or online, and on the menu at local restaurants including the Inn at Weathersfield and Juniper (where it will feature in a traditional South American asado dinner on August 5).

Given the quality of the meat, eating culled alpacas may seem like a no-brainer. But the Weathersfield farm is the only one doing it in Vermont. "A lot of farmers are like, 'There's no way we're doing that with our animals,'" Ian says. Many Americans are drawn to alpacas as a business that runs on keeping the animals alive, not killing them, he adds, since they're not traditionally part of the local food chain.

The Lutzes admit they miss the pre-recession days, when an average alpaca would fetch $10,000, and top-of-the-line seed stock could bring 10 times that, but Ian says that market was based on a bubble. "Prior to [the downturn], the alpaca world was purely exotic," he says. "Alpacas were rare, and you could sell an animal for a lot of money." But, he notes, "We were due for a price correction."

For now, the Lutzes are banking on the market sorting itself out eventually. "Our medium-to-long-term hope is that the industry will mature into something that's economically viable and based in reality," Ian says. And also that more and more alpaca meat will find its way onto the American plate.