Breakout: Tiny Adirondack Town Is the Backdrop for a Big, Big Story 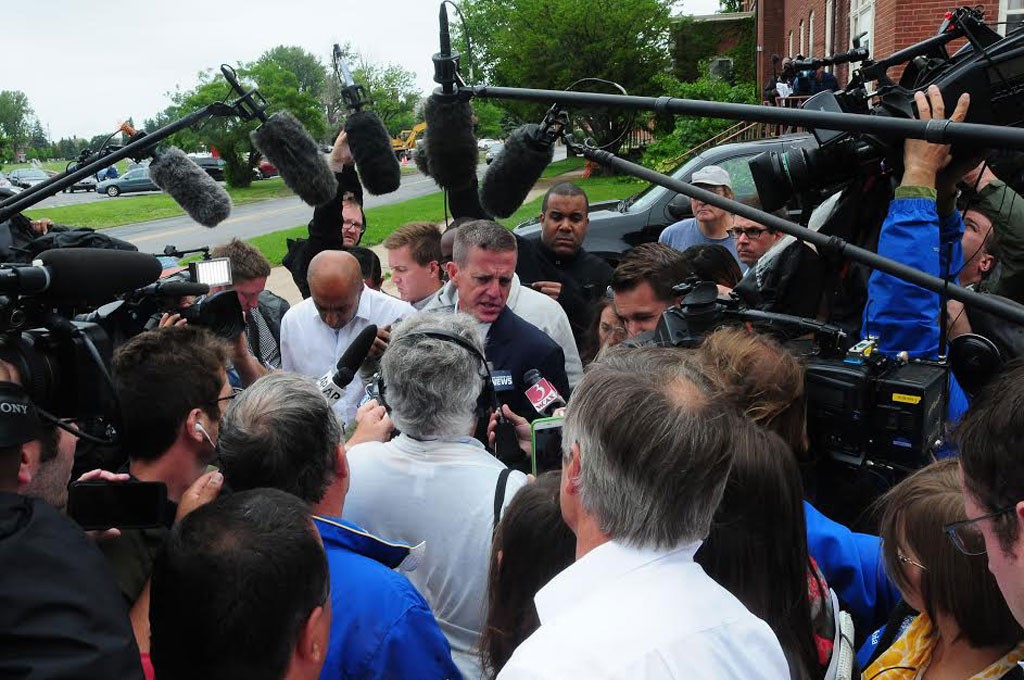 Local ABC 22/Fox 44 reporter Alex Rose works nights and weekends, like many newly minted journalists. On Saturday, June 6, he was scheduled to cover the grand opening of the city marina in Plattsburgh, N.Y., when news broke of the Dannemora prison escape.

Just a few reporters from local networks and the Plattsburgh Press-Republican attended New York Gov. Andrew Cuomo's press conference that day, according to Rose. As details began to emerge, Rose realized that he was onto the biggest story of his short career.

Dannemora — hardly anyone calls the prison by its proper name, the Clinton Correctional Facility — isn't just any prison, but a famously imposing fortress in a town with the same name. No one had ever escaped from its maximum-security wing, which has such famous alumni as rappers Tupac Shakur and Ol' Dirty Bastard, mobster "Lucky" Luciano, and Son of Sam killer David Berkowitz.

And the escapees, Richard Matt and David Sweat, were not just any inmates, but violent killers. Their breakout was intricate and well planned: They duped guards with dummies made from sweatshirts and used power tools to escape their cells. They cut into a pipe and shimmied through it, emerging from a manhole outside the prison.

Editors and producers across the country reached the same conclusion as Rose — Dannemora was huge news.

Over the next couple of days, national reporters descended on the Adirondacks. Journalists from Japan, China and Great Britain joined the fray. Reporters from the local television stations found themselves working alongside their national network peers in what would become a draining media marathon.

Dannemora, 15 minutes west of Plattsburgh, lies at a crossroads of local media markets. WCAX, a CBS affiliate based in South Burlington, keeps a small bureau in Plattsburgh. Local NBC affiliate WPTZ is based in the upstate New York city. Colchester-based ABC 22/Fox 44 got a room at the La Quinta Inn & Suites in Plattsburgh and called it HQ. By last week, it was starting to smell bad, Rose joked on a recent afternoon.

"Every one of the press conferences got bigger and bigger," Rose said, recalling the last two weeks. "It felt like we were climbing over each other. We're fighting an uphill battle, but we're trying to own the coverage."

Rose was one of a few local television reporters who took a break last week to describe how they covered the biggest news story in the Adirondacks since the 1980 Olympics in Lake Placid. Their coverage only intensified on June 9, reporters said, when Cuomo and Vermont Gov. Peter Shumlin teamed up to announce the inmates might have fled east to the Green Mountains.

WCAX reporter Alex Apple got home that night at 1 a.m. Because his South Burlington condo is right around the corner from the station, he had volunteered to be on call. His phone rang at 3 a.m. Rumors were swirling that the police had pinned the escapees down in the woods. So Apple hopped into his car and drove back to New York.

The rumor turned out to be a false alarm. In the days that followed, police conducted several focused searches of the woods around Dannemora. Each one triggered reports that a capture was imminent. Apple ended up working about 30 hours straight, breaking in about once an hour with live updates.

WPTZ learned of the escape from a guard's wife — "I don't know if you guys want to check in on that," she told the station — and from then on, reporter Vanessa Misciagna was working 12 hours at a stretch.

Every day for the first two weeks, Misciagna got to Dannemora by 10 p.m. for her overnight shift. She caught catnaps in the news truck. To perk up for the first of several live morning appearances, she grabbed coffee from a gas station that opened at 4 a.m. She saw little of her Burlington home, usually crashing with producers in Plattsburgh during her off hours.

"This has been my life for the past two weeks," she said. "We wanted bodies there 24-7. It's been all hands on deck. It was two weeks of highs and lows and your adrenaline spiking and, I'm going to give it all because this is it, and then it turns out to be nothing."

Misciagna said some of the police officers who were putting in 16-hour shifts searching for the inmates told her privately that they assumed the escapees were already far away. But publicly, officials provided little information.

For one of the biggest stories to ever hit the area, the Dannemora escape often lacked a rather essential element — actual news.

"It was interesting because of the lack of information," Misciagna said. "You obviously saw things happening. You had jarring images of officers and state police and guys with guns in neighborhoods, guarding intersections. As a journalist, you think, OK, this is the heart of it. But where is the information? You're just not getting it. The only info we could get was from press conferences or talking to neighbors, but they couldn't confirm anything."

As days dragged on and press briefings became more sporadic, journalists scrambled to come up with new angles. Stories focused on how locals were faring with the swarm of police and media, the history of the prison, speculation about where the inmates may have fled — and even the kind of power tools they likely used. The Burlington Free Press focused obsessively on whether and when state police were monitoring ferry crossings across Lake Champlain.

The nadir may have come last week, when media seized on images portraying how the inmates might have aged — in two weeks.

"At this point, we're squeezing a rock, trying to get anything out of it," Rose said.

But if journalists were becoming weary by last week, locals in Dannemora were surprisingly still tolerant of the bizarre circus that had descended on their struggling town. Some even said they were happy for the excitement.

Unlike most Adirondack communities, Dannemora makes no attempt to be charming. "Welcome to Dannemora, building permits required," is what passes for a greeting sign.

The massive correctional facility, which has 30-foot perimeter walls, is located smack in the village's center. The scene recalls a small European village built around a huge castle, except no tourist has ever swooned over the prison known as "Little Siberia."

A few weeks back, an out-of-towner stopped in the village's liquor store and asked cashier Linda Drollette the question she used to get all the time: Anyone ever escaped?

Drollette chuckled and said "No." The next day, she awoke to a phone call from a relative with news of the prison break that has since mesmerized the region.

"I never thought I'd live to see the day," Drollette said last week.

The downtown scene is limited to that liquor store, a Stewart's Shops gas station and a Chinese carryout joint. A three-bedroom house across the street from the prison wall is on the market for $90,000. There used to be three bars in town, but the last one, named Breakout, closed several years ago.

"We don't have anything," said Dannemora native Greg Bowman, a plumber who used to work in the prison.

Bowman and his wife, Ellen, live across the street from the facility and have soaked up the scene from their front porch. On a recent Thursday afternoon, that's where they were smoking cigarettes and drinking beer and lamenting the constant buzzing noise coming from overhead.

"Fucking helicopters," Greg Bowman said. "Oh, man, it's so stupid. Why they're still flying is beyond me. Those guys aren't around here. They're gone. They didn't go through all that bullshit to get out of that prison to stay around here."

By the middle of last week, the national networks had begun to lose interest. And on Wednesday night, news broke of a shooting in a historic South Carolina church that left nine African Americans dead.

The next morning, a cameraman from a national network casually leaned back in his chair on a sidewalk across the street from the prison. Comparing his situation to the one in South Carolina, he said he wasn't expecting any action. "Charleston, man," he explained. "They caught the guy. Good visuals. Obama spoke... "

By then, a pack of 15 satellite trucks that had patrolled Dannemora days after the escape had thinned to three. Local TV reporters said they would stick with the story as long as the search was still on.

"Now you're playing the game of, 'We have to be here, because the second you turn away is exactly when they're going to catch them,'" Apple said.

As Seven Days was headed to press Tuesday, Apple and the other local TV reporters were still hopscotching around northern New York. News reports said traces of the escapees' DNA had been found in a hunting cabin near Owls Head, about 15 miles west of the prison — invigorating searchers, and the media. Authorities chased unconfirmed sightings of the men on Titus Mountain and in tiny Bellmont, N.Y., 50 miles west of the prison.

The situation had changed since last week, when it seemed like everyone in Dannemora was a reporter — or a cop — waiting for something. Police ordered food, walked down the streets, drove back roads and walked through fields. Sometimes, the groups converged.

Midafternoon on Thursday, I pulled to the side of a road between Dannemora and nearby Cadyville, where I had arranged to meet another reporter. After about 10 minutes, three New York State Police cruisers came screaming in behind me and stopped. Troopers quickly walked to my car.

I opened the driver's side door and leaped out to identify myself as harmless. But the troopers didn't seem alarmed.

"Yeah, we figured you were media," a trooper said. "But we have to check everything."