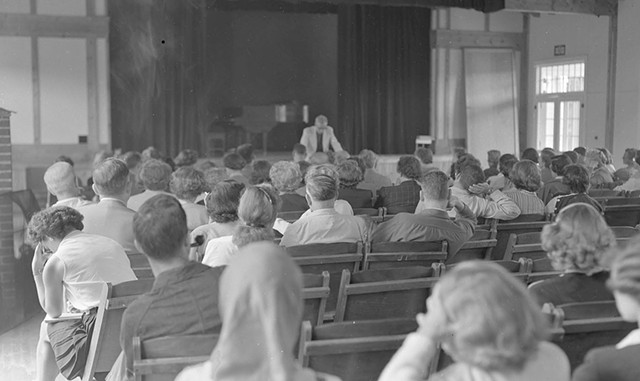 Plenty of writers have worked in food service. For more than 50 years, though, being a "waiter" on the mountain campus of Middlebury College's Bread Loaf School of English meant something more. It was the distinction handed to promising writers at one of the literary community's best-known conferences.

In November, Jennifer Grotz, director of the Bread Loaf Writers' Conference, announced in a public letter that she will discontinue the waiter program, which was Bread Loaf's primary scholarship opportunity. Instead the conference will now offer funding to writers at various career stages without tying it to work in the dining hall.

Working as a waiter during the 10-day Bread Loaf conference each August was a rite of passage for many writers. Those selected for the position were rewarded with free attendance and the opportunity to give a reading during the conference.

"The waiter-work scholars were about 20 writers, out of about 300 who attend the conference," Grotz said in a phone interview. "It was a small population, but it was a well known and symbolic one."

A suggestion from Robert Frost was the impetus for founding the conference in 1926. Since then, many writers have spoken of Bread Loaf as their first foray into the broader literary community, an intense experience from which great camaraderie could spring. Others have criticized the conference for its association with drinking and debauchery — particularly in its earlier decades — or for perpetuating elitist notions of who could be a great writer.

Writers have traditionally applied to Bread Loaf at one of three levels: Contributor, Scholar and Fellow. Before Grotz's recent changes, Bread Loaf attendees at the Contributor level usually paid full tuition — which was $3,631 at the 2019 conference. Contributors include early-stage writers and those who haven't yet published in literary journals. Scholars, the writers who worked as waiters, typically have some publishing experience but haven't published a book; Fellows have one book under their belts. While Scholars and Fellows have always received funding, Contributors will now also be eligible for it.

The waiter program made the divisions among writers highly visible, leading to what Grotz said many have described as a "hierarchy" at the conference.

"There was a lot of anxiety about that," Grotz said. Along with eliminating the waiter positions, she established new scholarship offerings at all levels of attendance, including awards designated specifically for Contributors. Her aim, she said, was to maintain the "ecosystem" of Bread Loaf while minimizing inequities.

"When I became the director, I asked myself, If I were starting this conference today, would I put in this work-study component?" Grotz said. "And the answer is, absolutely not."

Grotz, who became the first female director of the conference in 2017, first attended Bread Loaf as a waiter in 1995. In her letter announcing the changes, she described it as a formative experience that helped her develop key relationships with other writers.

While the tradition of Bread Loaf waiterships may be storied, it doesn't date from the conference's beginnings. According to Bread Loaf historian David Haward Bain, for the first few decades, local young people with no connection to the conference staffed the dining hall. Over the years, those positions became increasingly populated with students; in 1968, then-director John Ciardi formalized the scholarship program.

Discussions about the conference's direction are far from new. When Robert Pack departed as director in 1994, he told the Rutland Herald that he was pushed out by the Middlebury administration and "the pressures of political correctness."

Pack was replaced by Michael Collier, who, according to newspaper accounts, rerouted the conference, steering away from its hard-partying reputation and refocusing on teaching. Bain said in an email that Collier reduced the workload for waiters and stopped charging them for room and board.

After the 2016 conference, waiter Jean Chen Ho penned an essay for VIDA: Women in Literary Arts, a feminist nonprofit, in which she alleged that she had witnessed multiple incidents of racism and sexual harassment at Bread Loaf.

"I felt invisible — in the manner that people who serve us our food and clean up after us exist in the periphery of our visions, just outside of our table conversations and our attentions — and simultaneously I felt hypervisible, as if under constant surveillance, my every move observed and judged," Ho wrote. She described female and black waiters experiencing inappropriate touching, staring and comments.

Ho did not respond to an email requesting comment, but former Burlingtonian Benjamin Aleshire, a poet who also attended Bread Loaf as a waiter the same year, corroborated Ho's experience in a New York Times article earlier this month.

"2016 was an unhappy moment. There were waiters who did feel that it was an outdated and unfair program ... We listened to that," Grotz said. After hearing about the complaints, she and Collier met with the waiters during the 2016 conference.

Julia Alvarez, a poet, novelist and writer-in-residence at Middlebury, wrote in an email that when she first attended Bread Loaf in 1969, "the faculty ate on a dais in the center of the dining hall! It was all about celebrity & star & a white, mostly male privilege system that left out so many. It's not the craft and community of writing I wanted to join."

Alvarez added that she's been grateful for Grotz and Collier's efforts to make the community more inclusive and egalitarian. "Of all people, we writers know that most of writing is revision — and our institutions require continual revisions in order to reflect more accurately the kinds of communities we want to participate in as writers and people," she wrote.

Poet Major Jackson, who was a waiter at Bread Loaf in 1996 and is now a professor at the University of Vermont, said the waiter-scholar dynamic was always complicated.

"The work-scholars were a significant aspect of the operation, but also identified as some of the most exciting and emergent voices," he said in a phone interview. "It allowed for a certain amount of access. Yet it also rendered that group of people as some of the most vulnerable."

Jackson described his experience at Bread Loaf as "hugely formative." In his view, the changes in scholarship offerings simply remove an outdated tradition.

"It's a remarkable evolution," Jackson said. "It's remarkable that it did not happen sooner."

The original print version of this article was headlined "No More Waiting: Bread Loaf Writers' Conference Ends a Tradition"