Bread and Bones, I Know Stories 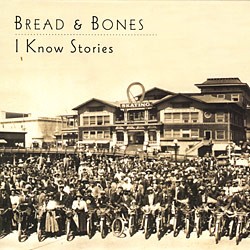 Richard Ruane, Beth Duquette and Mitch Barron have performed music together and separately as members of various bands, including Feast or Famine, Sundog, The Hibernators and Wild Branch. While I can claim only a passing familiarity with these ensembles, their coming together as the acoustic trio Bread & Bones strikes me as inevitable. Their dynamic perfectly suits their rootsy bluegrass sound.

The opening number of Bread & Bones’ debut album shares its name with the band. Straight away, the album’s strengths are clear. Ruane’s superlative guitar work drives the song. Barron’s nuanced bass line adds depth. Duquette’s and Ruane’s voices weave delightfully through each other and the music.

“Bread & Bones” also showcases the album’s two major lyrical trends, old-timey folk balladry and bleak or absent romance. The song’s narrator commits a crime, flees (to the “borderline,” no less), and returns to be judged. Afterward, he or she laments having “no one to hold or be held to/no one to tell my secrets to.”

Songwriters in traditional genres tend to evoke past eras overtly when not being temporally ambiguous. On “My Father Is Gone,” a child recollects a father who died working on the railway. It’s a fine song, effectively evoking a sense of death and loss, as well as the difficulty we have coming to terms.

Still, I mean no criticism when I wonder: Why not a modern context for such themes? Would it be odd to lament a father whose spirit was broken when he was fired from IBM? A father who died because he had no health insurance?

That said, Bread & Bones lose nothing by eschewing modern imagery in their lyrics. Their words are strong with a wealth of quotable lines, such as the Duquette-delivered “You call to me; / Why should I feel you? / I see your shape, / And you’re not there.”

If I have one bone to pick with the recording, it’s the cleanliness. Digital recording allows a crisp and clear sound. But I’d prefer to hear this kind of music, which the band proudly admits is “steeped in tradition,” with a bit more warmth and haze.

I Know Stories is a solid album made by musicians who know and love traditional American music. Check it out if you’re a fan or if you need a primer. And see them on Saturday, July 12 at The Music Box in Craftsbury.