Brandon's Barn Opera to Get a New Home, in a Barn 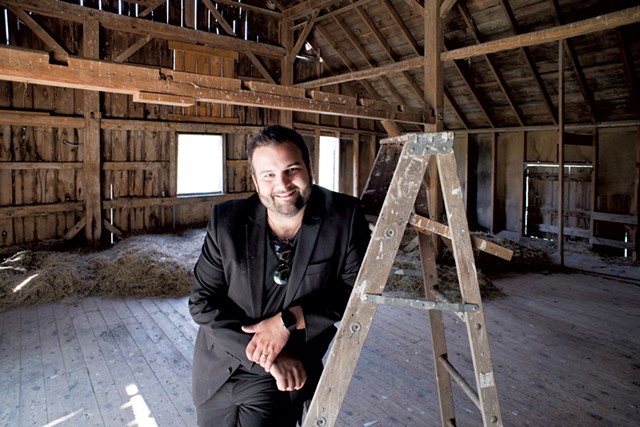 Imagine how much more engaging real estate shows would be if all prospective buyers were like Joshua Collier. When hunting for a new home for his nonprofit Barn Opera, the artistic director, a tenor, tested the acoustics in more than 50 barns by — what else? — singing in them. After all, cavernous farm buildings weren't designed to host operatic works such as Carmen and Così fan tutte.

The 19th-century Brandon barn that Collier ultimately chose for his company, which has outgrown its current quarters, was originally a dairy barn on the Sanderson family farm. Located at 1321 Pearl Street next to the Sanderson Covered Bridge, it was most recently a storage space for local designer Nancy Leary and her husband, attorney Jim Leary, who live across the street. The barn was the last that Collier and barn renovation project manager Russ McColman saw after five months of visits, both by invitation and on the sly. Like others they saw, this barn wasn't technically for sale.

"We were sitting there, having coffee," Collier recalled, "and the current owner of the property came by, found out what we were doing and said, 'You should look at my barn.'" Nancy Leary, who has owned the barn for more than two decades, told Collier she's thrilled that the place will be getting a new life.

Since its inception in 2017, Barn Opera, a project of the Compass Music and Arts Foundation, has sought to make opera accessible to all by offering world-class performances in an intimate and unpretentious setting. It has operated out of Brandon Music's small red barn on Country Club Road — a natural choice, given that co-owner Edna Sutton is Barn Opera's managing director. But the company has always needed more elbow room.

"We've sold out every performance, even our very first, Madame Butterfly," Collier noted. "We were worried about filling even one performance, but it sold out in two weeks."

That show was staged cabaret-style, but productions since then — including a September run of The Magic Flute that will be held in the Brandon Town Hall theater to accommodate the cast's 20 children — incorporate more sets, costumes and lighting. As productions have become more elaborate and the company has amassed a devoted following, Collier has added more seating. But still, the venue can only accommodate 50 spectators.

Once renovations are complete at the new space in May 2020, it will house Barn Opera's third season of opera masterworks, proceeds from which will continue to benefit Compass' outreach and education programs. The performance space will seat 120, and the lobby with café tables and a bar will serve Brandon-made wine and beer, Collier said.

Outside, rotating sculpture exhibits will adorn a rock wall. Nearby, a pre- and post-show "lounge" with benches and a fire pit will sit atop an overgrown silo foundation. Collier wants to call it the "Founders' Garden" and to inscribe the names of those who sponsored the purchase of the barn.

The direct impetus to expand came from the first of the barn project's donors, who approached Collier with the idea after a show last fall and offered to contribute. That donor, plus seven others Collier has since recruited, have covered the barn's purchase price in full.

"Brandon has wrapped its arms around Barn Opera," he said. "All of the donors for the purchase price of the barn — with the exception of one — came from Brandon." Collier is still seeking donors to cover some of the barn's renovation costs.

Barn Opera is a local endeavor, but that hasn't precluded interest from international patrons.

"You're not going to believe this, but we have an operagoer from Ireland that happened to be here for one of our performances and now schedules her vacations to the U.S. so that she can come to Barn Opera," Collier said, laughing.

Patrons like this superfan may be drawn by the company's relatively affordable prices ($50 per ticket), by the welcoming vibe of the barn space or by Collier's commitment to contemporizing operatic story lines. He will alter scripts to avoid lionizing bigoted or downright oppressive behavior. In a May 2019 performance of Carmen, for example, Collier had Carmen kill her jealous, scorned lover rather than be killed by him, because the artistic director didn't like how the script romanticized the lover's murderous act.

Barn Opera's 2019 season features four works, but because the new barn will be under construction for a significant part of the year, Collier is planning just three operas for the 2020 season.

Sutton and her husband, Stephen, will remain active members of the Barn Opera board, but the nonprofit's move will relieve them of unofficial duties: Their house served as the green room for performers during shows; the new facility will have a green room of its own.

But the Suttons will continue to showcase musicians and performers at their barn.

"We've been in business there for 10 years," Edna said. "We've always run concerts there and will continue to do so."

Given their efforts and those of Barn Opera, "Brandon will hopefully now become known for music performance," Collier enthused.