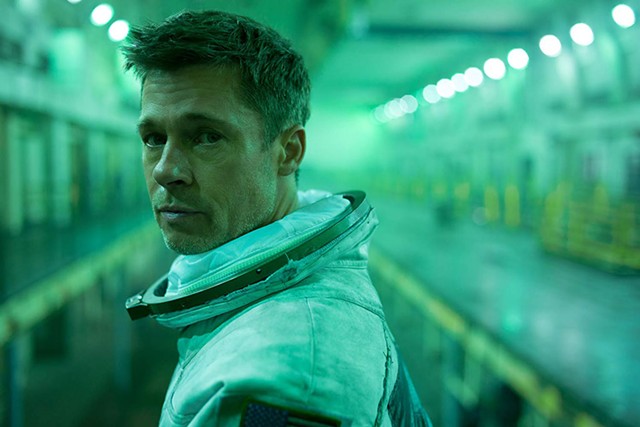 While careering through the void in James Gray's marvelous, masterful new space odyssey, Brad Pitt's character ruminates: "In the end the son suffers the sins of the father." It's a nice touch, linking the biblical with the futuristic, and the words carry more than metaphorical meaning. The actor plays an astronaut named Roy McBride who journeys to the depths of the galaxy in search of an astronaut named Clifford McBride (Tommy Lee Jones). The son's on a mission to stop his father from destroying the world.

It's complicated. Also, it's not really what Ad Astra is about. The story, which Gray (The Immigrant) cowrote with Ethan Gross, is set in the relatively near future. Pitt's character is a major in the U.S. Space Command, a veteran of conflict "over the arctic" and, most significantly, lousy at relationships. His significant other (Liv Tyler) has left him.

This must be speculative filmmaking if someone bails on Brad. The thing is, Roy has inherited more than his father's love of space. Like the old man, who pioneered interplanetary exploration, Roy is about tuning out the extraneous. "I am focused on the essential to the exclusion of all else," he repeats like a moon-man mantra. Everyone on Earth is somehow cognizant that his pulse has never topped 80. He's a private universe in a space suit, hates being touched and, regarding his coworkers, muses, "They seem at ease with themselves. What must that be like?"

The character's self-control initially appears to come in handy. Like when he's knocked off the International Space Antenna by a mysterious antimatter surge. Soon afterward, he meets with Space Command brass, who deliver the shocking news that his dad — presumed dead since disappearing on a voyage to Neptune years before — is both alive and behind those deadly electromagnetic blasts.

Roy embarks on a mission to meet with his father and relay a request to cease and desist. This entails a breathtaking car (well, lunar rover) chase and shoot-out on the moon, a zero-gravity knife fight en route to Neptune, and an encounter with the last life form Roy expects to bump into aboard a vessel whose distress call he and his crew answer. Which raises the eternal question: When will space travelers learn it's bad luck to answer distress calls? Seen Alien, anyone?

Though, as I say, all that isn't really what Ad Astra is about. Gray has made one of movie history's most visually mesmerizing, sonically hypnotic and subtly acted sci-fi epics. The DNA of genre classics is detectable throughout but never distracting. Solaris, Interstellar, Gravity, 2001: A Space Odyssey — Gray pays homage to each and more, along with another, more earthbound, masterwork: Apocalypse Now.

The filmmakers repurpose that picture's elements — in particular, Martin Sheen's voice-over as Captain Willard. Pitt channels the character's paranoia on his journey to the heart of a more distant darkness. Jones doesn't match the charismatic madness that Marlon Brando emanated as the power-crazed Kurtz, but no matter. It's not about that, either.

In the end, Ad Astra proves to be less about searching for intelligent life than searching for a way to live life more intelligently. The son may suffer the sins of the father, but enlightenment — course correction — is still within reach. Some may quibble about a last-act pivot to the virtues of introspection and self-improvement, but this isn't some sort of Stanley Kubrick-Oprah Winfrey presentation. It's the story of a man on the most important mission of all: discovering what it means to be human.

The original print version of this article was headlined "Ad Astra"