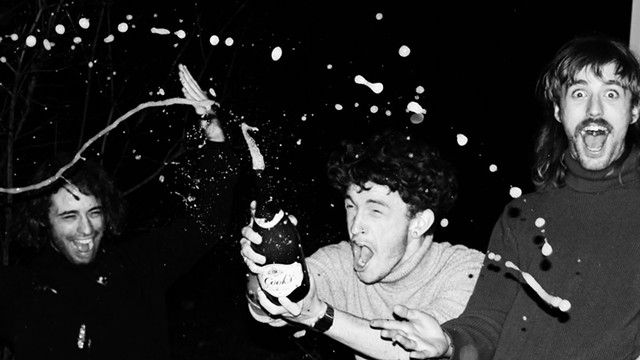 College rock, how I love thee. To be more specific: A small demographic exists among the college band set that strikes a chord deep in my heart. Beyond the urgent amateurs, devoted cover acts and meandering jammers, there's a higher form of the genre to be found. Burlington's boys cruise dwell solidly in that elevated stratum.

The band possesses the same chaotic energy of other acts composed of early twentysomethings. But boys cruise have the focus and drive to outshine their contemporaries. Their new self-titled LP exudes a feeling of freshness, of the unexpected. The most precious currency in music is being the next thing, and the Queen City indie rockers might just have that coin.

Boys cruise are part of a new wave of University of Vermont-based acts that have reestablished a robust scene at the school in recent years. Along with Pons and Don Rico, the trio can produce that elusive spark, one that can ignite both their collegiate peers and the greater music-listening public. The last time a local college act pulled that off was when Bison lit up the city before predictably imploding, as younger bands so often do. With two excellent full-length records under their belt, as well as the 2018 GIRLS CRUISE EP, boys cruise seem poised to shake that trend.

Featuring Johnny Clarke on lead vocals and guitar, Jack Parker on the bass, and Sammy Josh on the drums, the trio excels in channeling raw energy into a hyper-pop focus. Even when they go heavy or dark on the record, boys cruise manage to make every line sound like an anthem. Never mind that it isn't always clear what or for whom that anthem might be.

It's pointless to call any of the album's 14 songs a highlight, because the entire record is stunning — easily the year's best for me so far. The band has the ability to shift from heavy, pounding riffs to unhinged surf rock on "Flying Colors," before transitioning into a Strokes-like fuzz-pop number with "Fool's Gold." Both songs are laments for a lover leaving the city, a theme throughout boys cruise.

Lost love and regret for taking a partner for granted permeate many of the tracks, most strongly evident in "Eyes Without a Face" and "Whisper Machine." In the latter, Clarke sings, "Sometimes I doubt you / when you say we'll be fine in 2050," a line that cuts a little deeper after the past year.

"Crustacean" finds the trio thrashing about like a fish pulled from its bowl, all aggression and punk. When the boys hit this gear, equal parts menace and tongue-in-cheek lyrical metaphors, it's hard to deny the band's pull.

By the time the record concludes with "The Astronomer's Dream," boys cruise have opened their entire tool kit. Though traces of the playful pop that dominated 2019's Jerry are evident, boys cruise is defined by a noticeable shift toward a less refined but edgier aesthetic. This is a record full of raw power, unbridled youth and the feeling of urgency that only the best college rock can encapsulate.

Check out boys cruise at boyscruise.bandcamp.com and on all streaming platforms.