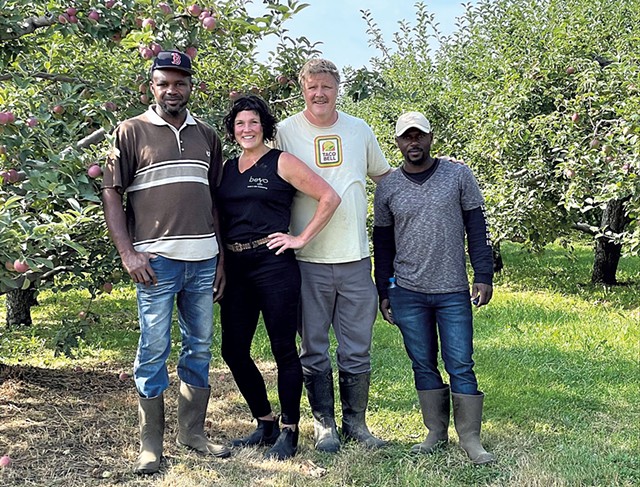 Kathleen and Aaron Stine, founder-owners of Colchester-based bevo catering company, have purchased the 32-acre Monkton apple orchard and farm market that was Boyer's Orchard & Cider Mill for almost 40 years. They will continue to run their 14-year-old catering operation while launching Stine Orchard at 1823 Monkton Road with the start of pick-your-own season, which began on Tuesday, September 6.

Genny and David Boyer opened Boyer's Orchard in a different Monkton location in 1975. After David's death in 2017, "I couldn't do it all myself," Genny, 77, said. "I thought it was time for new blood." She sold the property, which includes two barns, a sugarhouse and the market building, to the Stines for $700,000 in April.

For the Stines' first year of ownership, Kathleen said, "We are not going to try to reinvent the wheel." They will add some music, food and drink offerings to the usual pick-your-own hours, fresh cider doughnuts, pies and cider.

Kathleen said the Stines feel lucky to have the help of longtime seasonal orchard employee Shaneal Fearon and his colleague Denham McLean, "the backbone of the operation."

Most Thursdays, Cris Peck will cook up offerings such as grilled burgers, smoked ribs, Philly cheesesteaks and pulled pork sandwiches. Peck and his partner, Christina Cambridge, opened Bushel Market in July at 14312 Route 116 in Hinesburg, the former site of the Hinesburg General Store, about seven miles from the orchard. They offer groceries, beer, wine, a full deli, and foods and sandwiches prepared on-site. Peck previously owned Waterbury Wings and Shelburne Kitchen and co-owned Shepherd's Pub in Waitsfield with Cambridge.

On Saturdays at the orchard, the Stines will provide food, including mezze and charcuterie platters. Starting September 17, they will offer cider-brined pork chops on a stick. "My husband is from Minnesota," Kathleen said with a laugh. "They put everything on a stick there at the state fair."