Fans of Boyden Valley Winery & Spirits' Big Barn Red and Cowtipper have until the end of the year to stock their cellars with the Cambridge-based producer's wines and ciders.

On December 2, owner David Boyden announced on social media that the winery will "change its course" in 2021, closing its retail tasting room and ceasing production of its wines and ciders. Moving forward, the business will focus on its liqueurs: Vermont Ice Maple Crème, Apple Crème and Maple Bourbon Crème. Boyden will also continue to make Glögg, its mulled, spiced wine.

"The wine business has been fantastic for us over the years," Boyden told Seven Days on Monday. "My wife Linda and I started the business in 1997, and the whole process of growing grapes here, making wine and innovating new products has been great. It's just the time for us to change the business format."

The line of cream liqueurs, which first launched in 2010, features wood-fired maple syrup made on the Cambridge farm, as well as Boyden's own apple brandy. Boyden said the company will focus on wholesale, selling the products through local liquor stores and eventually increasing distribution beyond the Northeastern states where they're currently available. "But first we're looking to take a bit of a break," he said. 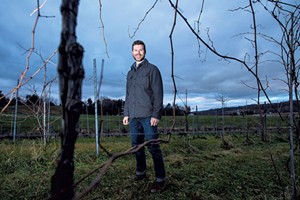 The vines — which are among the oldest in Vermont — won't go untended, though. This past spring, master sommelier David Keck moved back to his native Vermont from Houston and began leasing eight acres of frontenac noir, frontenac blanc and marquette from the winery. Keck plans to release his first vintage of Stella XIV wines in 2021.

"[Keck] approached us to lease the vineyard, and we're super happy that he's involved," Boyden explained. "The last thing we wanted to do was see a vineyard in Vermont no longer be in production."

The tasting room at the winery will be open Thursday through Saturday for indoor shopping and curbside pickup for the remainder of December. Customers can also place orders online. The winery will stop shipping products as of January 1, 2021.

"It's hard to make a change when you've done something for almost 25 years," Boyden said. "But we were in a good spot where things were going really well. It sounds kind of odd, but it was a good time to shift directions."