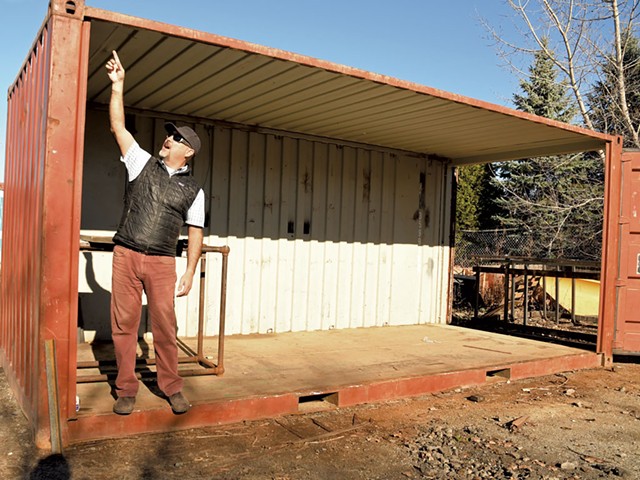 Last Friday morning in Burlington's South End, sparks flew from metal artist Aaron Grossman's welding torch. Peter Katz stood nearby in front of his 20-foot-long shipping container. In May, the Jeffersonville-based 43-year-old lost the job he'd had since 2006 doing independent site-acquisition research for Vital Site Services in Somerville, Mass. The reason given was a "lack of work" needed in the Vermont region. Instead of despairing, Katz switched gears and dove into a new project: transforming an industrial metal box into a mobile bar unit.

Aside from hiring Grossman to weld the future bar's iron framing, Katz is doing the work himself in the lot at 339 Pine Street. He bought the container in September for $1,800. With a background in land surveying and carpentry, Katz seems mostly undaunted by the practical tasks of outfitting the structure. When it's finished, he says, he intends to rent out his mobile unit as an alternative to the catering bars common at weddings, parties and festivals.

He estimates that the rental fee will run $750 to $1,000. Katz will drive the container to a site, he says, either with a truck or an in-the-works custom trailering system, and then hand it over to professional caterers and bartenders. Because he does not plan to buy or sell alcohol himself, he doesn't need to obtain a liquor license. When not in use, the bar will be kept at a South End storage facility.

The bar will weigh an estimated 7,000 pounds. When it's in operation, one of its long sides will hinge open on the ground to form a sort of deck. The interior of the container will hold a long, U-shaped bar at which guests can sit. Electricity will come from an ordinary outlet or a generator, and plumbing will be hooked up either to pre-existing infrastructure or to a holding tank.

Katz has a longtime interest in the creative reuse of shipping containers. According to him, there are "literally millions of these things stacked around the world, rusting." The social media site Pinterest is packed with information about and inspiration for transforming the bare-bones boxes into ultra-modern cabins, snack shacks, root cellars and even swimming pools. But the trend seems not to have reached Vermont — yet.

"I've been waiting for it to happen up here," Katz said. "Where the hell is the container bar in Vermont? I haven't seen it."

The bar is already slated to serve at some 13 festivals next summer, Katz said, an arrangement orchestrated by Newman and Higher Ground business partner Alex Crothers.

But the scope of Katz's project goes far beyond a single container. "I don't want to do just bars," he said. In the future, he envisions turning shipping containers into tiny homes, which he described as a viable housing alternative for single people, couples and even new parents.

To augment Newman's backing of $5,000, Katz has launched a GoFundMe page with the goal of raising $10,000. Crowdsourced funds will be put toward finishing the bar prototype and starting a second one, he explained. "With a little luck," Katz wrote in an email, "I'm hoping to turn this venture into a sustainable career."

As the father of three children — twin 12-year-old boys and a 15-year-old daughter — Katz hopes to show them that "it's possible to be successful doing something that you love and makes you happy," he wrote, "as opposed to the 'normal' nine-to-five jobs our society seems to mandate."

Eventually, Katz said, he'd like to see his sons join the venture — so far, his daughter has zero interest. And he hopes the business will be lucrative enough to help cover the cost of college for all three kids.

The original print version of this article was headlined "Bars and Beyond: Shipping Containers Inspire a DIY Venture"