Bow Thayer, The Source and the Servant 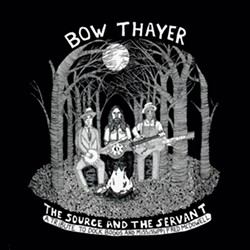 Bow Thayer is a serious asset to Vermont. Since he moved here, he's been a creative and cultural force and has consistently churned out impressive albums, both solo and with the Perfect Trainwreck. Thayer also founded the Tweed River Music Festival. In his spare time, he invented a new instrument, the Bojotar. Thayer's latest release, The Source and The Servant, is a tribute to two of his most distinctive influences: banjo phenom Dock Boggs and bluesman Mississippi Fred McDowell. (No surprise that Thayer has impeccable taste.)

The album opens with "Country Blues," a Boggs lament over resonant strings. It's a lovely, sparse track that sets up "Papa's Little Angel Child," a rollicking McDowell blues stomper. Once the drums get cooking here, the project achieves proper liftoff and maintains a powerful spell. This isn't medical advice, but I'm pretty sure this album cured my winter blues and Election 2016 hangover, too.

Thayer has been crafting quality albums for decades, and it shows. Experiments such as his 2013 album, Eden, have made him an increasingly confident producer. And a hundred little touches on The Source and the Servant shine. It's quite a balancing act to have a carefully honed product still sound like it was thrown together in an afternoon with some good friends.

The songs are well chosen, and the arrangements really keep things interesting. Since Thayer can command a room by himself, the accompaniment can be subtle. It can also rock out very hard. Fans of the Fat Possum Records approach to dirty blues will find a lot to love here. Longtime collaborator Jeff Berlin does magnificent work on percussion throughout. From unholy racket to ominous pulse, Berlin's creative approach is a real asset. On the low end, bassist Alex Abraham is all about restraint, anchoring the swamp funk just enough.

Some of the left-field choices hit the hardest, such as bringing in Mark Van Burren on marimba — an unlikely counterpoint that really works. Then there's the distinctive, spooky wail of Justine Calnan's bow-and-saw solo weaving through the mix. Aided by Benny Grotto's expert mixing, Thayer and Drew Townson's production work is strong, subtle stuff. For all its humble roots, this is an ambitious album.

The Source and the Servant is a tribute project, for sure, but every song here very much belongs to Bow Thayer. Whatever mix of woodshed practice, crossroad deals with dapper devils and guided ayahuasca ceremony it takes to make those blues your own, Thayer passed that point many moons ago.

While Boggs and McDowell are long gone, this album is a testament to their living legacies. The music is devoutly respectful, feels timeless and sounds modern. Whatever "the Source" may be, Thayer has a clear, open channel to it on his good days. May he keep bottling lightning and making magic for decades to come.

The Source and the Servant by Bow Thayer is available at bowthayer.bandcamp.com. Thayer plays on Wednesdays, December 21 and 28, at the Skinny Pancake in Hanover, N.H.

Speaking of Bow Thayer, The Source And The Servant

Album Review Bow Thayer The Source and the Servant