The woodshop at the Shelburne Craft School is filled with the scratching sound of planes against wood — that's to be expected. What's surprising is the age of the craftspeople.

On a recent weekday afternoon, 10-year-olds Eliza Brooks and Tess Everett stand atop wooden platforms diligently shaping pieces of red oak, looking for just the right curve in what will eventually become the belly of a bow.

Thirteen-year-old Raz Hansen walks in a few minutes late after taking a pop quiz at school and confidently begins work on his own length of wood.

The three kids are enrolled in the craft school's archery class for students ages 10 and up. The coolest part about it: Each student gets to make her or his own bow before learning how to shoot an arrow. 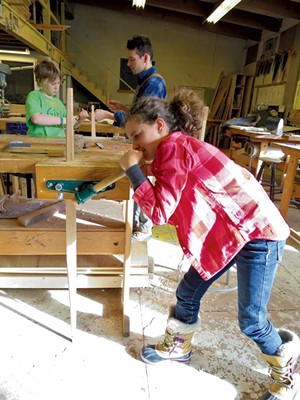 Fashioning a handmade bow might seem complicated, but class participants don't need prior woodworking experience. "I think wood is more of a familiar material than most of us realize," instructor Chris Ramos says. "If you've ever picked up a twig and snapped it in your hands, you're developing a sense for the material's structure and nature."

Each student gets off to a guaranteed good start since Ramos mills the wood himself, assuring the proper starting dimension and a very straight grain. Besides that, and a few quick cuts made with a bandsaw, the students will make "every measurement, scribe, contour, notch and adjustment" on their own, Ramos says.

All three students looked remarkably comfortable with the project during the second class of an eight-week session. They tossed around words like "bevel" and "marking gauge" as if they'd been hanging around a woodshop their whole lives. Eliza, who built a three-string guitar using a cigar box in a previous class at the craft school, said she signed up for this one because she "likes building stuff with wood."

Having a tangible finished product at the end of the class was part of the draw for Raz. "I like to have something to hold," he said. "And the process is fun because you see your work progressing. It's not an instant fix."

In addition to an impressive set of woodworking skills, students develop a connection with the craftsman's tradition over the course of the eight weeks. Because the instructions are at times very specific — such as using a special tool to precisely taper the bow — kids often ask questions like, "Why are we doing it this way?" Ramos says. The process helps acquaint them with rules that have been developed over generations of practice and effort.

Of course, students also learn how to shoot an arrow. The last class of the session is reserved for stringing the bow and target practice. Finally using the bow for its intended purpose is an exciting moment that helps students gain perspective on what they've accomplished, says Ramos. "They come back to the thought, This started as just a hunk of wood. It's the most fun day of the class."

The Shelburne Craft School offers an archery camp for kids ages 11-14 from July 27-31. For more information about this camp and other woodworking programs, visit theshelburnecraftschool.org.