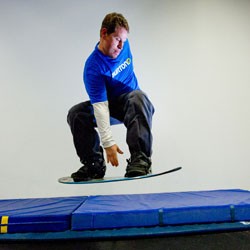 On a recent early evening at Williston’s Green Mountain Gymnastics, it’s business as usual: Young girls in star-spangled leotards and striped sweats are following the instructions of a goateed instructor with a Slavic accent. But what’s going on over in the corner is more surprising.

Scott Adam, head snowboard coach and program director of the Mount Mansfield Ski and Snowboard Club, is bouncing on a trampoline bed raised some 10 feet off the floor. A colorful Burton snowboard is strapped to his feet. Adam demonstrates a spin and a grab — boing, boing — before slowing down to catch his breath. “And this,” he says, “is how you land safely.”

What’s a snowboarder doing in a gymnastics facility when new snow frosts the flanks of Stowe?

Good question. And, it turns out, there’s a good answer. This corner of Green Mountain Gymnastics, which recently relocated from Boyer Circle across town, is a brand-new freestyle training center. Its purpose? Teaching skiers and riders how to air it out without incurring a season-, career- or even life-ending injury on snow. The only center of its kind in northern Vermont, this could be a game changer in training athletes for the 2014 Olympic Winter Games, or just about any other snow competition.

“Our snowboard and free-ski athletes need a place where they can develop their skills in a safe manner before they take their tricks to snow,” explains Adam. “This is the answer — this type of place has proven to be the training ground to develop extreme action-sports tricks.”

In times past, snowboarders and freestyle skiers waited all year for Mother Nature to dump enough white stuff for them to practice their McTwists and frontside rodeos. Only elite athletes got to train on professional trampolines, water ramps and foam pits in such hallowed Olympic grounds as Lake Placid, Colorado Springs and Park City, Utah. But, as snowboarders such as Shaun White have pushed the flipping frontiers of their sport, developing riders have begun seeking out their own trial-and-error spots.

Ski and snowboard academies, meanwhile, have been training students with air bags on the slopes of Mount Hood and building trampoline centers to lure promising talent. Stratton Mountain School has a trampoline gym, as do a handful of other private schools around New England. But until now, northern Vermonters had no place to work on their repertoire other than the hard and often unforgiving snow.

“This is something I’ve been wanting to do for eight years,” says Adam, who coached for Killington, Mount Snow Academy and the University of Vermont before taking the MMSC reins. A decade ago, he adds, nobody would have believed that double-cork 1440s would be de rigueur for aspiring athletes. Making foam pits and trampolines available helps level the playing field; everyone has a chance to learn.

Adam trained some of his athletes to do single flips on an air bag at Mount Hood and to do doubles at Lake Placid over the summer. He was scouting around for a possible dry-land center when he heard — through an MMSC supporter with a gymnast daughter — that Green Mountain Gymnastics was moving into a sprawling new facility just off Industrial Avenue.

GMG co-owner Robin Bourdeau, meanwhile, was wondering what to do with excess space at the new spot. “When we moved in, this space was 12,500 square feet, and we were only utilizing 10,000 square feet,” she says. When Adam and MMSC members approached Bourdeau with their idea to add a snowboard and freestyle-ski training center, she says, “It was like a vision of what could happen here, and everybody was really on the same page.”

Now the snow-sports athletes have a dedicated set of three raised trampolines. Adam and his crew are adding a tumble strip, a second 24-by-24-foot foam pit, a ramp and other features that will enable riders to learn body control in a safe environment. Over the past couple of months, MMSC and UVM athletes have been training regularly at the gym in the evenings. On December 26, the Freestyle Training Center will officially open to the public with the kickoff of open-gym time, group training time and private lessons.

“One night I was sitting here [watching a training session], and it was like starting all over again,” says Bourdeau, who has owned GMG with her husband, Gary, for 10 years. “New business, new people; it was so fun to watch.”

The young gymnasts, for their part, can sometimes see role models in the skiers and riders bouncing on the trampolines, says Bourdeau, and perhaps envision options besides becoming the newest Mary Lou Retton.

“A lot of boys are intimidated to come into a gymnastics facility where it’s all girls in leotards,” Bourdeau notes. “All of a sudden, you’re opening a door where it becomes a safe place for anybody to be.

“A lot of what we do is the same thing — teaching them technique and form to make them better in their sport,” she says of the partnership between gymnastics and snow-sports training. “We’ve each got our resources, and to blend them together is a win-win for everybody.”

Whether or not his athletes eventually win their competitions, Adam is determined to help improve safety in snowboarding while keeping pace with new tricks. He mentions Kevin Pearce, the Quechee rider who was racing to get his tricks dialed in before the Vancouver 2010 Games when he suffered a devastating crash. “It’s not something that could have been controlled,” says Adam, “but through more time in a foam pit and more time in a controlled environment, I hope to be able to make sure that those types of injuries are reduced greatly.”

Adam has also been using the trampolines to develop resistance training for Alpine athletes. In addition to increasing safety, he points out, the training allows Vermonters to train year round. Even in the warm weather that would stymie recreational riders’ and skiers’ plans, gravity-defying enthusiasts can stay stoked by working on their tricks indoors. “I’ve seen a new resurgence of excitement and drive in all my kids’ eyes,” says Adam of the athletes with whom he works. “They’re so excited to take what they’ve been learning here over the past two months to snow.”