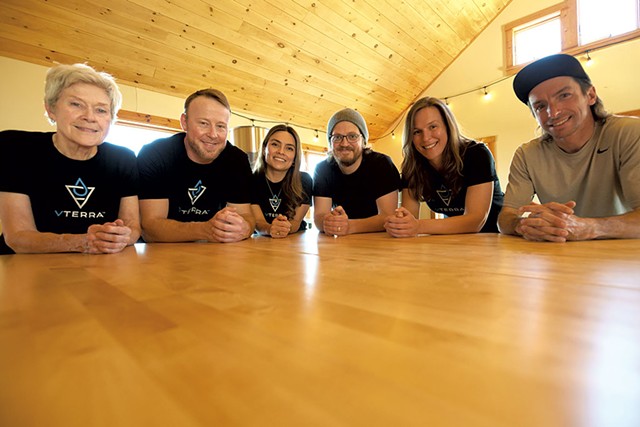 When Kevin Kennedy's sister, Taryn, was dying from an aggressive form of cancer a few years ago, she used cannabis — both THC- and CBD-infused products — to manage her pain, help her sleep and treat the nausea brought on by chemotherapy. At the time, Kennedy said, Taryn was on a very strict diet that virtually eliminated her intake of sugar and fat. But in the world of cannabis therapeutics, almost all of the available products either had to be smoked or vaped, which she didn't want to do, or were edibles that were steeped in sugar, butter or oil.

"We found it very difficult to find cannabis-based products that actually had any nutritional qualities," Kennedy said.

Taryn's experience became a major motivator for Kennedy to bring to market cannabis-based products that are not just therapeutically effective but also have more nutritional value than a piece of candy or a pot brownie. Taryn, who died in late 2019, inspired him to found vTerra Farms, a 143-acre hemp farm in Starksboro that produces its own CBD-infused products, including a concentrated extract, a fire cider, fruit gummies, and a hand and body lotion. In keeping with its focus on health and purity, vTerra's products are all lab tested and certified free of pesticides, heavy metals, petroleum products and other contaminants.

vTerra, which planted its first experimental hemp crop in 2018 and expanded to commercial-scale production the following year, launched its products shortly before the pandemic struck.

The company survived the lockdown and economic downturn of 2020 by selling almost exclusively online, and, Kennedy added, it received a modest Paycheck Protection Program loan that's since been forgiven. vTerra began selling products in local brick-and-mortar stores earlier this year.

Among vTerra's biggest selling points is its use of nano-encapsulation technology, which speeds the body's absorption of hydrophobic compounds, or those that aren't water-soluble. Pharmaceutical and diet-supplement industries have used this method for decades when manufacturing lipid-based medicines and supplements, such as vitamins D and E.

CBD in this form can be absorbed... in as little as 15 minutes. tweet this

Kennedy, who has a background in biology and engineering and is currently completing a graduate degree in biochemistry, explained how nano-encapsulation works. Conventional, oil-based CBD products must be absorbed through the body's fat digestive process, which he called "long and slow and quite wasteful." Typically, the pace of CBD digestion varies widely and depends on when it's consumed; other foods eaten that day, such as those that contain triglycerides; and one's own genetics.

As a consequence, he said, accurate dosing with conventional CBD can be difficult and vary from day to day, and as much as 96 percent of a dose can be excreted before absorption. As a result, many consumers give up on CBD because they assume it "doesn't work" on them, Kennedy said.

In contrast, nano-encapsulation shatters the large, oily cannabinoid molecules into ultra-tiny particles that are 100 nanometers or smaller in diameter. These particles are then encapsulated, or coated, in natural plant-based emulsifiers and suspended in a water-based solution. After ingestion, CBD in this form can be absorbed through the small intestine in as little as 15 minutes.

Kennedy, a 44-year-old native of Asheville, N.C., moved to Vermont in 2003 to attend graduate school. During his studies, he got involved in the cannabis industry out West just as other states began legalizing medical marijuana. He helped newly licensed dispensaries design and operate their own greenhouses and then began exploring the biochemistry of the cannabis plant itself. 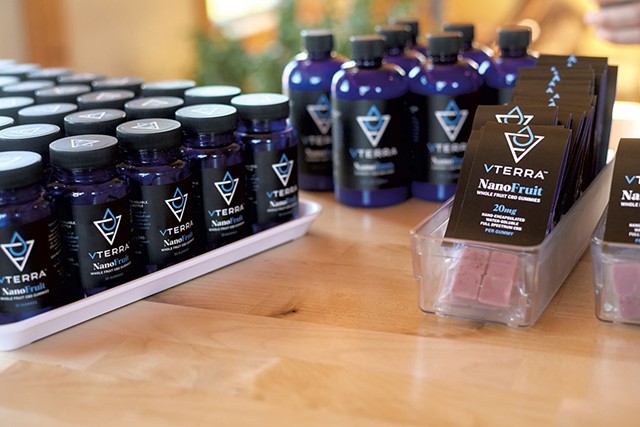 Kennedy and his half dozen or so employees — the number varies depending on the season — began farming hemp on leased Starksboro land about three years ago before he purchased the farm last December. Given all the market uncertainties of the pandemic, vTerra decided not to cultivate hemp in 2020, in part because the company had inventory on hand from the previous year's harvest.

Instead, vTerra focused on R&D and new product formulation and began the process of organic farm certification. In the next month, vTerra will employ two guest workers from Guatemala coming to Vermont on H-2A temporary work visas.

Though vTerra survived 2020 with few major interruptions, Kennedy noted that the year wasn't without its challenges. Among the biggest difficulties, he said, was sourcing packaging materials. Because a lot of plastic and glass was diverted for personal hand-sanitizer products, finding quality packaging was often difficult. Fortunately, vTerra had enough inventory on hand to get through temporary periods of scarcity.

Concurrently, Kennedy noted, the pandemic boosted many health-based businesses like his as people reexamined their physical and emotional health regimens. He heard of many customers "replacing the end-of-the-day glass of wine or cocktail with something that is less impactful to the liver" — such as a CBD supplement.

It's worth noting that vTerra's nano-encapsulation technology may have applications in Vermont's emerging adult-use cannabis market. The technology makes it possible to add THC to water-based products, Kennedy said, greatly expanding the types of edibles vTerra and other companies can produce. In addition, the technology will make THC dosing faster and its effects more predictable. Kennedy plans to apply for a license to cultivate and process cannabis when it becomes available.

As for the company's name, vTerra is partly an homage to Taryn, Kennedy explained, and comes from the Latin word for Earth or land: terra. The company is requesting that the Town of Starksboro rename the road the farm is on to Taryn's Way, in her honor.