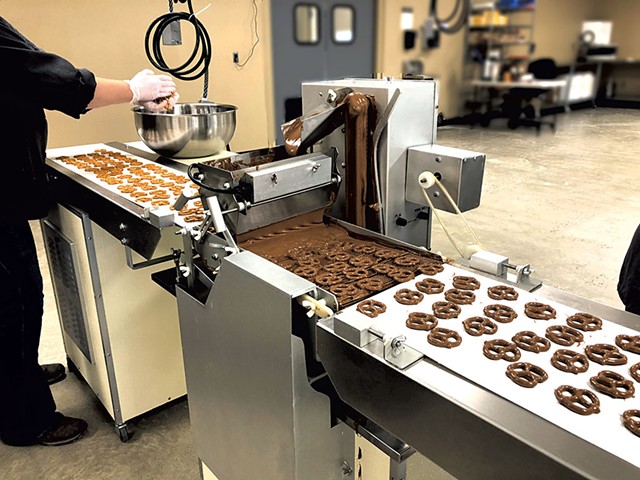 Halloween candy hit the shelves earlier than usual this year, and Vermont Nut Free Chocolates in Colchester was ready.

The company's first distributor order of orange-and-black-sprinkled dipped pretzels and solid chocolate witches, bats and ghosts shipped out at the end of July, about a month ahead of last year.

"Stores are bringing it in early, trying to maximize and lengthen the season," said CEO and cofounder Mark Elvidge, who launched the company with his wife, Gail.

With everyone spending more time at home due to COVID-19, he hypothesized, "they're hoping that people let the kids eat it, and then have to go back and buy more."

Overall, Elvidge said consumers' appetite for chocolate has stayed strong through the pandemic. "It's a comfort food," he said, "and the kids are home; you've got to spoil them a bit."

Where people are buying Vermont Nut Free products, however, has shifted.

Starting in April, online and mail order sales of the company's guaranteed nut-free chocolates, granola bars, caramels and other sweets jumped between 30 and 50 percent monthly over 2019 sales. But revenue slumped in the approximately 600 retail stores that carry Vermont Nut Free products from the East Coast to the Midwest.

Grocery chocolate purchases tend to be made on impulse, Elvidge explained. In the first months of the pandemic, people focused more on the basics when they went to the store. "They had a list, they went and grabbed what they could get [and] got the heck out of there," he surmised.

Vermont Nut Free's annual sales fall between $3 million to $7 million, Elvidge said. From January through July of this year, the direct-to-consumer portion of those sales increased from 60 to 71 percent.

"We are fortunate that we started out as a mail-order business and built a really strong, loyal mail-order base," he said. "It's a good position to be in for times like these."

The Elvidges started Vermont Nut Free in 1998 in Grand Isle, where they still live. The company was born out of the couple's desire to find safe treats for their own son.

Tanner Elvidge, now 26, was diagnosed with a severe peanut allergy at age 1.

At eight months, Tanner was sitting in his mother's lap while she was eating an English muffin spread with peanut butter. "He wanted a bite of it," Elvidge recalled, "and he put his mouth forward and it just touched his lips. He instantly turned red and had hives all over and started screaming. It was pretty scary."

It turned out that chocolate is high on the list of foods that are often exposed to nuts during processing. Gail started experimenting in the family's home kitchen to make candy that Tanner could safely eat.

Two years ago, the Elvidges hired their first dedicated sales director to help grow their retail distribution. Shortly afterward, they moved the business from Grand Isle to a 17,700-square-foot former furniture store in Colchester, which had ample space to ramp up production and storage capacity. 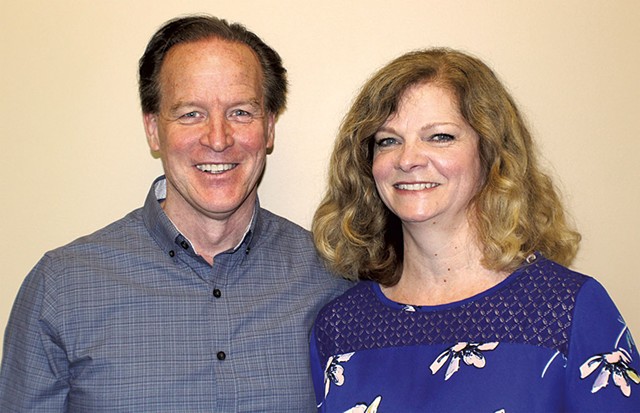 Summer is typically a slower time of year for both chocolate sales and production. Vermont Nut Free would normally downsize from its spring peak of 35 employees to about 20. But this year, after the company emerged from an Easter season that was up about 20 percent, it found an opportunity to get an early start on Halloween.

"We had the staff, the ingredients and the storage space," Elvidge said.

Vermont Nut Free also had cash in hand at a time of year when cash flow is not usually plentiful. Unsure what the pandemic had in store, Elvidge had applied for and received a federal Paycheck Protection Program loan of about $200,000. The funds needed to be deployed in order to earn forgiveness.

"We generally don't hire during the summer, but we brought in four high school-age children of existing employees," he said. This move was a win-win-win. It provided safe summer employment for teenagers while adding workers who didn't introduce potential virus exposure from more employee households.

The youngsters also proved strong members of the crew, Elvidge said: "They're welcome to come back if they have days or weeks off."

For about three months over the summer, Vermont Nut Free also paid all hourly employees an additional $2 an hour, and everybody worked four days a week but was paid for five.

The early Halloween orders are a good indicator that Vermont Nut Free's planned distribution expansion will happen this fall in time for the company's second busiest season after Easter.

"Assuming the country does not shut down again," Elvidge said, he is optimistic about meeting his 20 percent growth projection. That goal had been based on adding 200 to 250 new retail outlets earlier in 2020, but it looks likely the stores will instead come on board in the busy fourth quarter, complementing Vermont Nut Free's steady direct-to-consumer sales.

"We always put together a pretty aggressive growth budget each year, which we don't always hit," Elvidge said. "I actually think we might be very close this year."

Hadley Roy thought she was ahead of the game. In January, the Champlain College senior signed a postgraduation lease on a Burlington apartment. By late February, she was sending out résumés.

The Litchfield, Conn., native knew she wanted to stay in Vermont and hoped to put her marketing degree to work for a local nonprofit.

Roy, 22, was making good headway with her job search — until the pandemic arrived.

"Jobs became fewer and fewer," she said. "I was getting emails back saying they were no longer hiring."

Well into the interview process with one organization, everything stopped abruptly. "They said, 'We just can't afford to hire anyone right now,'" Roy recalled.

Her parents were concerned that she'd signed a lease. "I told them I'd wait tables if I had to," Roy said, "but then there were no tables to wait."

Luckily for Roy, after several video interviews, she eventually landed a position as sales and marketing coordinator for Vermont Nut Free Chocolates.

"Who doesn't want to work for a small business that is a chocolate factory?" Roy asked rhetorically.

She's been working there in person since mid-June, enjoying the perk of broken chocolate bars off the production line and wondering whether she'll recognize her coworkers when everyone finally unmasks.

The original print version of this article was headlined "Safe Treats"