Bottom Line: Through the Pandemic, Oh My Dog Keeps the Pups at Play 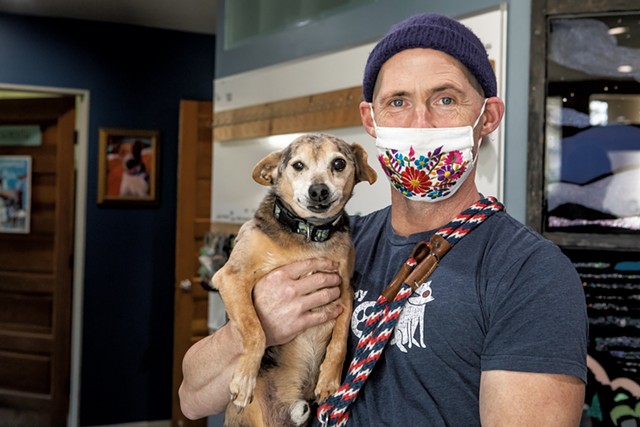 Whitney Troy-Vowell was watching through the front door of Oh My Dog in South Burlington last week as a blue pickup truck pulled into the parking lot.

"Gracie B, please," Troy-Vowell called to one of his employees. She retrieved the retriever, a golden with silky hair and a jolly disposition, from the play yard in the back of the building on Lime Rock Road.

It was the busy time, about 5:30 p.m., when a steady stream of clients arrived to fetch their pups after a day of play, naps and loving attention from the Oh My Dog staff. Troy-Vowell manned the front of the house like a multitasking maître d', stepping outside to chat with his customers and ask after their well-being.

For the past year, customers have asked about his well-being, too. Troy-Vowell has struggled to keep his pet daycare and boarding operation afloat; the pandemic has cost him some 70 percent of his normal annual revenue. But customers' concern helped Troy-Vowell weather the most difficult period of Oh My Dog's 10 years in business.

In mid-March 2020, when Gov. Phil Scott ordered a shutdown of nonessential businesses to stem the spread of the coronavirus, dog daycares were allowed to stay open for working people. But many of Oh My Dog's clients shifted to working from home, where they could entertain their dogs themselves. They also stopped traveling, causing Oh My Dog's boarding business to plummet.

Before the pandemic, Oh My Dog hosted 150 to 180 dogs most days, Troy-Vowell said. The average is now 130 to 170, climbing back up from a low in late fall. For Thanksgiving weekend, Oh My Dog would normally board 105 to 115 overnight canine guests. Last November, just 11 dogs came to stay, Troy-Vowell said.

This March, Oh My Dog's ledgers returned to the black — tallying more earnings than expenses — for the first time since February 2020, according to Troy-Vowell. He said he plans to resume providing employee health and dental benefits, which he had to cut last year.

But Oh My Dog's 26 employees have never missed a day of pay since the pandemic began, even when the facility closed for six weeks in March and April last year, Troy-Vowell said. In June, he gave them raises. A bit of serendipitous foresight early last year made this possible.

In 2019, Oh My Dog had its best year ever, turning a healthy profit, Troy-Vowell said. He gave his staff holiday bonuses and put the balance in the bank. Normally, he would have turned the cash back into the business for some major project, he said, but he decided to keep it in reserve this time.

That money helped carry Oh My Dog's payroll, while Troy-Vowell himself took no salary. By the time the daycare reopened at the end of April 2020, a federal Paycheck Protection Program loan brought $434,000 into the business, he said.

"Without [the employees], without the clients, I don't have the life that I have," Troy-Vowell said. "And I never forget that. I always keep that up front. Many, many times a day, I remind myself how lucky I am."

In Troy-Vowell's back corner office at Oh My Dog, the walls are covered with music posters and photographs, and a speaker blasts rock music outside. His elderly rescue pup, Mac, sleeps under the desk in a cushy bed, his graying muzzle tucked in a blanket.

Including Mac, 12 rescued dogs live with Troy-Vowell at his home in Cambridge. He lost six others last year, mostly due to old age, he said. His daughter, Soleil, also lives there and works at Oh My Dog.

"Many, many times a day, I remind myself how lucky I am." Whitney Troy-Vowell tweet this

Troy-Vowell, 46, grew up in Cape Cod, Mass., and came to Vermont in 2006. Before opening Oh My Dog, he worked for the Howard Center with people on the autism spectrum.

Oh My Dog started in 2011 as a partnership with Williston-based All Breed Rescue. Troy-Vowell and his now ex-wife, Mia, signed a contract with the organization to house and care for the dogs it rescued and slated for adoption. The couple served as the primary conduit for canines transported from high-kill shelters, mostly in the South, to Oh My Dog.

"I personally drove down and brought back over a thousand dogs," Troy-Vowell said.

They hadn't planned to get into a commercial dog daycare and boarding business. Within a couple of years, though, All Breed had trouble paying Oh My Dog under the contract terms, Troy-Vowell said. In 2013, the owners shifted to offer their service to the public, adding grooming and a limited retail section.

Over the years, Troy-Vowell has continually renovated the sprawling building — and invested $125,000 in dog-friendly faux grass for the play area. The business operates seven days a week, and he often works 16-hour days.

"This is a community-driven small business because of how we started," Troy-Vowell said, referring to the rescue mission. "That is part of the roots and the foundation of this business that I never want to change."

Marc Pratico and his wife live in North Hero, work in Burlington, and drive a few miles farther to bring Tyrone, their high-energy terrier mix, to Oh My Dog. Though his wife began working from home during the pandemic, Pratico still drops off Tyrone at the daycare at least once a week.

"I applaud small-business owners like him, because he kept the doors open, kept staff on," Pratico said when he picked up his bouncy black-and-white pooch last week. He and his wife like that they can see photos of Tyrone enjoying himself on Oh My Dog's social media posts. "I'm a firm believer that if you find somewhere that gives you great service, it's not a problem going out of the way."

To keep clients and staff safe during the pandemic, Oh My Dog abandoned the communal evening gatherings in the lobby during pickup time. Instead, it started curbside service, with staff walking pets to their owners' cars upon arrival.

"The curbside service ended up being the best thing that has happened to this business," Troy-Vowell said, admitting he disliked the idea at first. "It's just so much more personal."

Now, Troy-Vowell is looking forward again, past the pandemic. For one thing, he's returning to a long-considered idea of making Oh My Dog an employee-owned business.

"There's something so special about this particular iteration of the Oh My Dog family, and a lot of it is because of COVID," Troy-Vowell said. "We went through hell together that we didn't ask for, and we've come out the other side."

The original print version of this article was headlined "Canine Care"