Bottom Line: Slammed by COVID-19, Women’s Pant Maker SheFly Is Back and Raring to Go

Georgia Grace Edwards spends lots of time talking about dropping trou. The 25-year-old Middlebury College grad is cofounder of Burlington-based startup SheFly, which set out to solve a problem that's long plagued half the world's population: peeing outdoors as a woman.

The problem has nothing to do with the female anatomy and everything to do with women's apparel, the majority of which, Edwards noted, is designed by men. Traditional pants zippers are engineered primarily for the male anatomy — a members-only club, if you will.

In the summer of 2016, while she was working as a guide on the Mendenhall Glacier in Alaska, women's bum rap in trousers hit home for Edwards. Spending eight to 12 hours a day on the ice, she was seriously disadvantaged compared to her male colleagues, who could easily wee at will without baring too much.

In contrast, Edwards found herself taking long and sometimes dangerous treks to find privacy, and then removing multiple layers of clothing in butt-clenching cold before relieving herself. Burning unnecessary time and energy, she knew there had to be a better way to go. 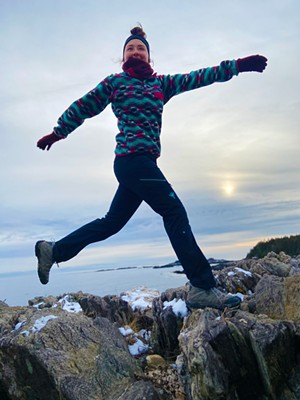 Back in Middlebury, Edwards attended an entrepreneurial training program and began prototyping what would become their user-friendly outdoor she-slacks. She and Gonzalez hooked up with fellow Midd kid Charlotte Massey, an avid climber and mountaineer from Washington State. In August 2018, the trio of twentysomethings registered SheFly Apparel as a Vermont-based company. Its slogan: "Answer nature's call."

Consumers were highly interested in their innovative design. The pants' double zippers run along a hidden seam between the pant legs, allowing wearers easy and adjustable access to their privates in both front and back. As for undergarments? Women either pull them to the side, Edward explained, or "go commando." SheFly is also developing base layers with a similar design.

By late 2018, SheFly was winning statewide entrepreneurial pitch competitions and garnering national press. The small startup crowdfunded more than $51,000 in March 2019 and presold 500 pairs. SheFly contracted with a certified fair-trade, zero-waste facility in Dharamshala, in the Indian state of Himachal Pradesh, to manufacture their product.

When the pandemic hit and Americans went outdoors in record numbers, demand surged for SheFly, which was tailor-made for women with active lifestyles. But just as the company was taking off, its progress was halted midstream.

"This time last year," Edwards recalled, "we found out that our factory in India was going to be closed down for a government-mandated lockdown."

SheFly notified its customers of the delay and promised to get them their gear as soon as possible. But the "temporary" shutdown became permanent when the manufacturer went out of business.

"Like, closed their doors, sold all their machines [and] tens of thousands of dollars' worth of inventory stuck in India that we won't be able to recover," Edwards said. Because the expense of shipping the unused fabric to a new manufacturer costs more than the material was worth, the company took a total loss.

"So we've been without SheFly product for a full year now," Edwards said. "There are about 400 people in the world who have SheFlys, but the rest are still waiting, unfortunately."

And, because SheFly is a startup without a regular payroll, the company didn't qualify for state or federal assistance such as Paycheck Protection Program loans. 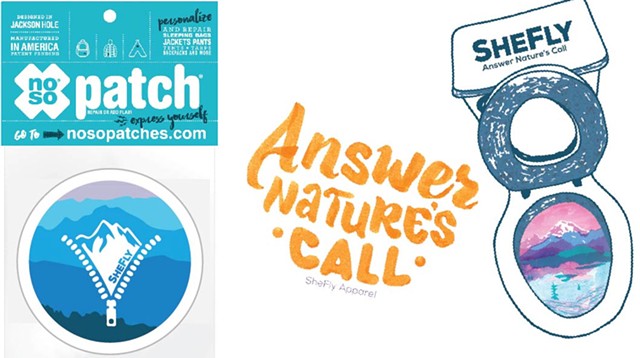 Despite the costly and demoralizing setback, the SheFly team, which has grown to a half dozen employees, spent its lockdown scattered across the country and focused on other projects, such as rebranding and rebuilding its supply chain. Though the company tried to move production to the U.S., Edwards said they couldn't find a domestic manufacturer that could make their technical product without tripling the price of the pants. (SheFly's two models sell for $128 a pair.)

Still, when nature calls, she won't be left on hold for long. With a waiting list of more than 3,000 people "of all genders," Edwards said, SheFly has lined up a new manufacturer in Shanghai, China. The company expects to place an order soon. Edwards estimated that consumers could have their products by late summer.

In the meantime, feedback from the lucky women who wear them has been, in Edwards' words, "overwhelmingly positive.

"We had quite a few fans tell us how helpful their SheFlys were during the pandemic," she said, "especially in the context of avoiding high-traffic public restrooms, frequenting places where public restrooms were closed altogether — we got lots of golf course anecdotes — spending longer periods of time outside overall, and taking on new hobbies like rock climbing."

SheFly isn't just about helping women avoid embarrassment and discomfort. As Edwards pointed out, women who work and play outdoors for long periods often limit their fluid intake to avoid having to pee, putting themselves at risk of dehydration. Others hold their bladders excessively long, which increases their chances of urinary tract infections.

Moreover, for women serving as firefighters, police officers and military personnel, disrobing on the job can create serious safety concerns. Her team has heard numerous anecdotes from female soldiers about the dangers of relieving themselves in combat zones, as well as from police officers who have to remove their utility belts and firearms while on duty.

About two weeks ago, Edwards spoke to a woman from Colorado who works as a bridge inspector and dangles in a harness all day. She told Edwards that SheFly has completely changed her life, and she requested five more pairs so that she can hire more women.

Recently, the company was one of four startups chosen from among hundreds of applicants to participate in the Moosejaw Outdoor Accelerator, an eight-week intensive business mentoring program sponsored by the outdoor gear and apparel retailer. Though SheFly isn't taking orders on its website until production resumes, getting its products into Moosejaw's shops and on its website would be a real game changer.

About a third of all communications the company receives are from people who want to bring the product to a new industry, Edwards said. Now that SheFly has patented its dual-zipper technology, the company could license its design to other manufacturers.

After what had looked to be a dismal year, SheFly is giving new meaning to the phrase "squatters' rights."

The original print version of this article was headlined "Sweet Relief | Slammed by COVID-19, women's pant maker SheFly is back and raring to go"