Bottom Line: Quarterstaff Games Stays Alive for the Next Level of the Pandemic 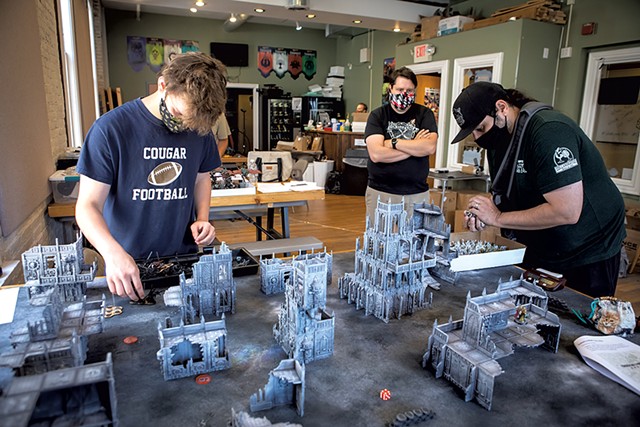 You will not find a single video game on the shelves at Quarterstaff Games, a hobby shop tucked away up a flight of stairs next to Earth Prime Comics, on Burlington's Church Street. Instead, you might find a board game called Myrmes, an ant battle royale. ("Fill up your larder, hunt down insects and wisely place your pheromones to conquer the territory.") There's also Pandemic, whose premise now sounds depressingly like real life ("The clock is ticking as outbreaks and epidemics fuel the spreading plagues."), and Meeple Party, whose premise now sounds depressingly insane ("You and your roommates are throwing a house party."). Not surprisingly, said Quarterstaff manager Benjamin Higgins, Pandemic has been selling particularly well over the past few months.

As people cocooned themselves at home this spring, puzzle and board game sales skyrocketed. In the last two weeks of March, puzzle maker Ravensburger saw a 370 percent increase in U.S. sales compared to the same period in 2019; game manufacturer Hasbro reported strong first-quarter earnings.

Major corporations weren't the only beneficiaries of this analog gaming bubble: At the end of March, the creepy dungeon-y board game Frosthaven, created by a one-person design company, became the third-most-funded project in Kickstarter's history, generating $3 million in donations within three hours.

While the country's three biggest game retailers — Target, Walmart and Amazon — have profited from the pandemic-induced online retail boom, independent hobby stores such as Quarterstaff are struggling to recover from the shutdown. According to Higgins, Quarterstaff is currently operating at 50 to 60 percent of last year's sales.

Before the pandemic, Quarterstaff held tournaments and open games most nights of the week. "Gamers are very social people, and our customers describe us as family," said Higgins, who, like Quarterstaff's four other employees, found his way there through his own gaming proclivity. (Higgins is especially fond of Terraforming Mars, in which players compete to create the most suitable living conditions on our planetary neighbor.) "People were constantly here, bringing their friends and hanging out for multiple hours. We've all suffered a bit from having to sequester ourselves."

After the shop closed in late March, Higgins and the rest of the staff — two other full-time employees and two part-timers — quickly pivoted to a contactless business model. They set up an e-commerce site; one staffer at a time went into the store to prepare orders for shipping. Three days a week, other employees made home deliveries within Chittenden County. During the shutdown, said Higgins, they received eight to 12 delivery requests a day.

"Honestly, I expected less," he said. "Our community really rallied and supported us when we needed it, and for that we will always be thankful." 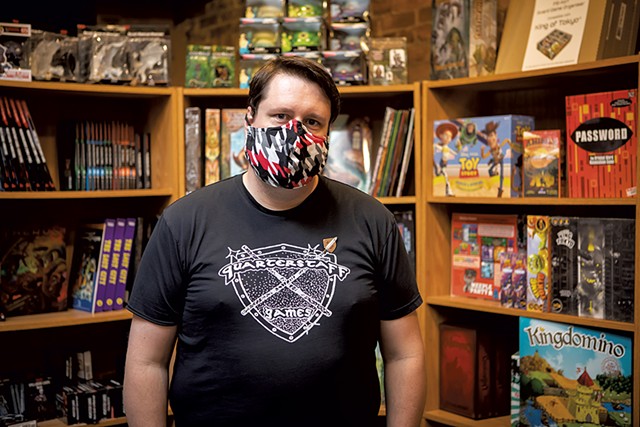 While many other small businesses laid off employees, Quarterstaff kept everyone on payroll. "In the gaming community, everyone looks out for everyone else. That's something you might not see at a clothing store," said Higgins.

In fact, the whole point of Quarterstaff is community, the shared experience of inhabiting an alternate reality. Owner Chris Farrell, 58, opened Quarterstaff in 1989 as a clubhouse for people who shared her obsession with tiny tabletop universes. "I think I got into it because I didn't have enough playmates as a kid," she said.

Since 2005, Farrell has left the day-to-day management to Quarterstaff's employees. She is so hands-off, in fact, that she told a Seven Days reporter she doesn't even know, off the top of her head, how many people work there. But the finances are still under her purview. This spring, Farrell secured a Paycheck Protection Program loan to cover payroll for both Quarterstaff and Earth Prime Comics, which she also owns.

Now that the federal money has run out, Farrell is a bit cagey about what's next. "I don't want to give this up, and I'm not ready to pull the plug, but the income just isn't there," she said. Her plan is to keep both businesses open for as long as she can. "I've already ordered inventory for the comic book store through September, so we'll be open until then!" she said with a bleak chuckle.

In true gamer fashion, Higgins has conceptualized each phase of reopening as a series of levels; currently, Quarterstaff is on Level 3, which allows up to five masked customers in the store at a time. Higgins, for his part, is in no rush to advance.

"I think we're going to hang out here for a while, until we see either a massive drop-off in infection rates everywhere or a vaccine becomes available," he said. "I'd like to think we're being more cautious than most, which is definitely a choice. We sell luxury products. Nobody needs them, and nobody will want to come in if we're not doing things right."

At Level 3, the sense of community is finally starting to come back. Since June, Quarterstaff has been holding Saturday tournaments of Warhammer 40,000, a two-player game that consists of dozens of miniature combatants, with names like Daemons of Slaanesh and Maggotkin of Nurgle, assembled in attack formations on 6-by-4-foot tables. In this particular realm, the demands of social distancing and the rules of play are fortuitously aligned.