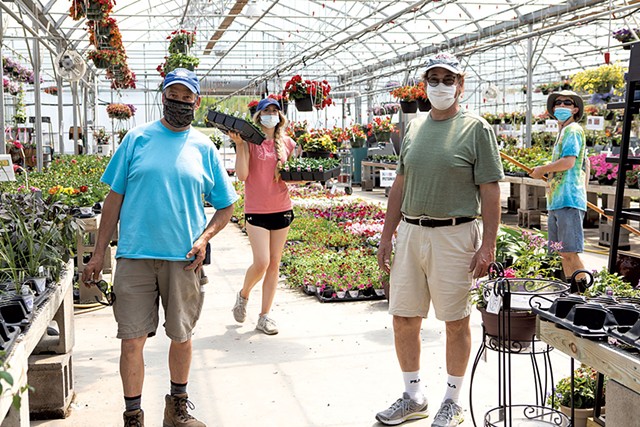 From a distance, things didn't look terribly out of the ordinary at Paquette Full of Posies. The dusty gravel parking lot at the rural Williston nursery was lined with Subarus and Priuses. Customers milled peacefully about the sunny grounds with the spring-hued Green Mountains as a picture-postcard backdrop. People of all ages ducked in and out of lush greenhouses and meandered through rows of shrubs, sprouting veggies and flowers destined for yards and gardens throughout Chittenden County.

This idyllic scene was exactly as it typically would be on a brilliant afternoon a few days before Memorial Day weekend. You'd almost never know a pandemic was raging. Almost.

Some of the hints were subtle, such as the small, unobtrusive signs at the entrance to each greenhouse listing capacity limits and advising customers to respect social distancing and sanitize their hands. Other clues were more overt, such as the now-ubiquitous cloth masks covering the faces of every employee and all but one or two customers. (The shop dog, Zula, a sweet old chocolate lab, also doesn't wear a mask.)

Inside the massive main greenhouse, stocked floor to rafters with every imaginable flower hardy enough to stand up to Vermont's climate, the scene was also much as you'd expect at a popular nursery.

"This is one of the best years we've ever had." Ron Paquette tweet this

But here, too, there were subtle differences. Shoppers practiced an awkward sort of courtesy, dancing around one another to afford enough room amid the long, colorful aisles. Some chatted amiably, separated by wide bench tables covered in petunias and calla lilies and, of course, posies. Two women, obviously old friends, happily greeted each other by the register with air hugs from about 10 feet apart.

Even as the shutdown due to the pandemic has ravaged many businesses in Vermont, for Paquette Full of Posies it's meant, improbably, a boom.

"This is one of the best years we've ever had," Ron Paquette, owner of the second-generation family business, said through a blue cloth mask.

Some of that prosperity is undoubtedly due to the pandemic as isolated Vermonters look to gardening to augment newfound hobbies such as baking sourdough bread. Add in a long, cold spring, and Paquette thinks there was a perfect storm of conditions for the swell of sales at his and other nurseries around the state.

"People get that pent-up anger against Mother Nature," he said, only half-jokingly. "Plus, they're home, stuck in their yards and want to make it nice. Maybe they're tackling projects they'd been putting off."

Revenue, however, is not the only thing that's increased at his nursery. 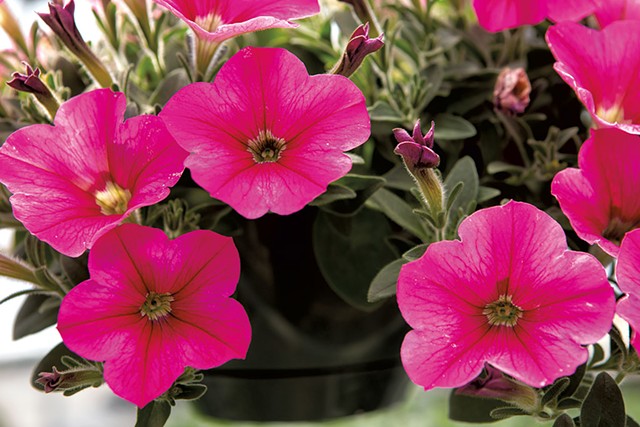 "Anxiety and stress, that is way up there," Paquette admitted. "You're concerned about the safety of the people and doing things right."

By most accounts, Paquette and his staff have been doing things right, including implementing a completely new business model for the nursery on the fly: curbside pickup service.

"That's added another whole dimension to what we do, and it's something that we've never done before," he said.

To handle the extra work, Paquette increased his staff from nine to 12. Among the added helpers is Fiona Love; she's worked at the nursery for three summers but usually starts in June.

"It's been the busiest summer since I've been here," Love said, in part because of the hurdles of handling curbside pickup. "But we managed it," she said. "Everyone has been super understanding because it's such a weird time."

Paquette expects to continue offering curbside through the summer and may implement it permanently.

"It could be a whole new way of doing business for us," he said. That will eventually include a website that offers online ordering. At present, Paquette and his staff take all pickup orders over the phone.

That means a lot of extra work, he acknowledged. "But it's working out, and we'll get better at it."

If the nursery's recent track record is any indication, that's likely true. When the coronavirus hit Vermont in March, planting season was well under way.

"We were at the point where there was really no turning back," Paquette said. "Even if we had wanted to cancel orders, we wouldn't have been able to."

During the first month of the pandemic, Paquette's nerves were wracked with uncertainty. Seed and agricultural businesses were deemed essential by the state and allowed to remain open. The question for Paquette was how to do business safely. Being able to implement curbside pickup before Easter, the traditional kickoff to the nursery's busy season, was a huge relief.

Another stroke of good fortune: Because his main greenhouse was built with roll-up sides and a roof vent, the structure is considered an open space, rather than an enclosed building. That meant he was able to invite small numbers of customers — fewer than 10 at a time — earlier than other retail businesses, which can now have up to 25 percent of their normal capacity inside.

"And people were standing in line outside the greenhouse smiling, just happy to be here," Paquette marveled.

They continue to be. Paquette said that, every morning, people are waiting in their cars to get in. These days the phone starts ringing at 7:30 a.m., a half hour before the nursery opens.

"You try not to answer it, but then you've gotta listen to a voicemail," Paquette said with mild chagrin.

Not that he's complaining.

"We are so fortunate that we're able to sell," he said, noting other businesses, such as salons and many restaurants, that haven't been as lucky.

"Some of the things we do aren't essential, though the vegetables are," he continued. "But it was essential, I think, for the well-being of the people, physically and mentally, to get them outside and thinking about other things and planning for the future."

To illustrate his point, Paquette offered a fitting analogy.

"It's like planting a garden," he said. "You plant now and harvest in September."

The original print version of this article was headlined "Business Is Blooming | Despite the pandemic, a Williston nursery thrives"