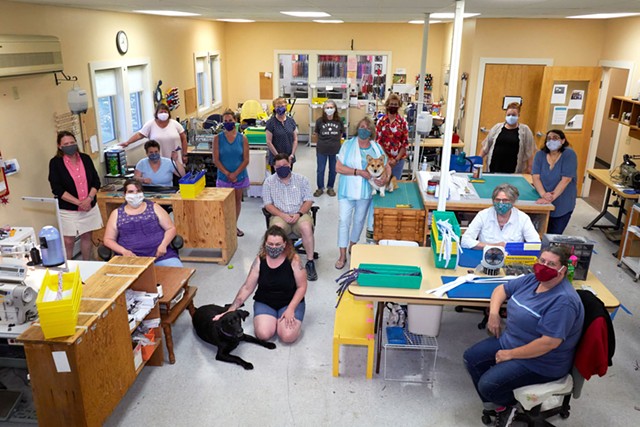 Scroll through the website for Beau Ties LTD, a men's accessory company in Middlebury, and you'll find 139 different patterns of cloth masks, from paisley to polka dot. Before COVID-19, the 27-year-old company sold primarily bow ties — plus neckties, cummerbunds, ascots, dress shirts, socks and shoes — to dapper customers across the country, online and through catalogs.

Since early May, though, Beau Ties' biggest seller has been cloth masks with adjustable ear loops and a built-in flexible nose wire, for both kids and adults, at $12 apiece. The company has sold tens of thousands through its website in just a few months.

The best-selling style is one that speaks to our current time: a black mask with the words "I can't breathe" emblazoned across it. It's a reference to some of the last words spoken by George Floyd, a Minneapolis man who was killed by the police in May, setting off a wave of calls for racial justice and police reform across the country.

The company is donating all proceeds from these masks to the Equal Justice Initiative, a nonprofit organization that provides legal representation to people who have been illegally convicted, unfairly sentenced, or abused in state jails and prisons.

Beau Ties introduced the "I can't breathe" masks on June 12 and sold 800 of them in the first three days, said the company's CEO and creative director, Greg Shugar, a South Florida entrepreneur who acquired Beau Ties in April 2019. He'd cofounded menswear company the Tie Bar in 2004 and built it into a multimillion-dollar company before selling it to a private equity firm in 2013.

Shugar decided to market the "I can't breathe" mask after a meeting with others in the company. "We felt like this was an important time that we needed to recognize and be a part of," he said.

Despite that mask's popularity, some customers "very much took the messaging the wrong way," Shugar said. The day the mask was introduced, the CEO fielded angry emails from 9:30 a.m. until past midnight. Some people were civil, but others were not, he said. "If they were rude to me, I [gave] it right back ... I stand by our values."

Shugar's foray into selling masks started back in mid-March, during the early days of COVID-19 — a time when, he said, "no one was thinking of buying bow ties." When he heard about the national shortage of personal protective equipment, his first thought was, There's no way that the United States should be struggling getting this stuff.

Shugar reached out to contacts in China. They helped him identify several reputable mask factories that could make KN95 masks, a Chinese version of N95 respirator masks. Shugar posted on LinkedIn that he was able to procure masks. His phone started "blowing up" immediately, he said, with calls from physicians, senior living facilities and emergency service providers all over the country looking to purchase them.

In what he calls a "crazy" three-week period, Shugar sold half a million KN95 masks. Appalled by price gouging that was taking place in the market, "I barely charged any more than I was buying them for," he said. "We didn't make much on the masks, but we bought ourselves enough time where I could keep my employees on the payroll for a little bit."

Prior to the pandemic, Beau Ties had 23 employees, including 15 seamstresses who worked in the company's Middlebury factory.

Though the factory closed on March 17, those seamstresses didn't stop sewing. They volunteered their time to make and deliver masks for essential workers and senior living residences in Addison County with fabric the company donated, said Beau Ties president of sales Lizzie Smith.

The company began emailing customers weekly about these initiatives and received dozens of inquiries daily about when they would start selling cloth masks. With the factory still closed, Shugar determined that the best way to keep costs down for customers and meet the high demand for masks was to contract with a Chinese factory that makes fabric for Beau Ties to produce masks.

In mid-April, Shugar ordered a batch of 600 masks from China in six different patterns. Before the company was able to introduce the new collection via email, all of them had sold out on the company's website. "I don't know how it happened," Shugar said.

After refining the design and adding more patterns, he ordered 2,000 more. The masks went up on the company's website at midnight, and by the next morning they, too, were almost sold out. "We were sleeping," Shugar said. "Who's ordering masks at three in the morning? At that point, I realized we got something here."

The next step was to expand the company's offerings and bring seamstresses back to work. Shugar and Smith came up with the idea to create matching bow ties and masks for customers looking to make a fashion statement. Said Smith, who has worked for the company for 22 years: "I was convinced that, having sold to the bow tie community for a long time, they're unique. They're going to want their masks to match."

As Gov. Phil Scott began allowing businesses to resume operations in May, the company was able to reopen its factory. Stationed six feet apart, five seamstresses at a time can work in the factory sewing bow ties and other accessories, but at a slower rate than before the pandemic. Several haven't been able to return because of health issues. Those who have take turns working 7 a.m. to 3:30 p.m. shifts.

A few times a week, mask shipments from China arrive in Middlebury, and the company has hired two new employees to keep up with shipping and fulfillment; it now employs 19 people. On average, said Smith, they send out about 300 packages a day. On May 21, the company had its biggest sales day on record: roughly 1,000 orders for more than 5,000 masks and hundreds of bow ties.

The Vermont-based workers wouldn't be able to keep up with the demand for masks, Shugar said, so the company plans to continue manufacturing them in China. But the matching bow tie orders have kept the Vermont factory humming and the seamstresses busy.

Prior to COVID-19, only a handful of orders per month came from Vermont. "We're not a 'dress-up' state," explained Smith. But the company's entry into the mask market has attracted buyers from Cornwall to Winooski — about 20 local orders per day — who may not be enticed by the formality of bow ties but can get on board with the practicality of masks.

"I finally feel like the state of Vermont knows who we are," Shugar said.

Though neither he nor Smith is sure how long people will be masking up, both think Beau Ties will be offering the facial coverings for the foreseeable future. They're speaking with private schools about making masks with logos and have recently introduced "Vote" masks — available in both blue and red.

"We've kept a company going. We've kept people's jobs. We're actually selling something that's useful," said Smith. "I think, at the end of the day, all of us feel good about that."