Last March, Marina McCoy was entering her fifth year in business as a sustainability director for music festivals and other big events, helping organizers reduce the trash they generated. Her company, Waste Free Earth, had contracts worth about $300,000 in the works for the coming year.

The coronavirus pandemic swept it all away. Waste Free Earth lost not only all of its gigs but also the money spent to prepare for them.

McCoy was devastated. But she took the year to reinvent herself and her company into "zero-waste experts," teaching businesses and individuals how to eliminate their disposable habits.

"We're on a mission to change how society produces and consumes waste through education that engages and empowers others to create change," McCoy said.

She had always envisioned expanding beyond events. The pandemic simply kicked that plan into action.

Now Waste Free Earth boasts a much broader and, one could say, more sustainable business model. It focuses on education, customized workshops, blog content and a Zero Waste web portal. The company has also consulted on projects for clients including Ben & Jerry's and Hula, the emerging business incubator on the Burlington waterfront.

The demand is there, according to McCoy, who has embraced the title "sustainability boss lady." "Waste is becoming so much more in the mainstream" as a topic of discussion and concern, she noted.

The internet abounds with information about zero-waste living, particularly on social media. Waste Free Earth organizes and packages that info so it's easy for no-trash newbies to follow and translate into action, while connecting with others taking the same steps, McCoy said.

At her kitchen counter in Williston one afternoon last week, McCoy stirred used coffee grounds into glass containers of coconut oil — homemade body scrubs that she gives to friends and family. A glass jar in a closet holds bottle caps, which McCoy sticks on bars of soap to prevent them from leaving a slimy mess in a shower or sink.

McCoy, 27, grew up in Rutland and attended Sierra Nevada University on the shores of Lake Tahoe, where she earned a dual degree in sustainability and ski business and resort management. Back home in Vermont the summer after her first year, she attended the Frendly Gathering music festival in Windham.

Like most of those in attendance, McCoy brought stacks of plastic cups for beverages and adorned herself with plastic glow sticks. At one point, the sustainability student recognized the hypocrisy of her contributions to the event's rubbish heaps.

"I just saw all this trash," she recalled. "From that moment on, I became obsessed with waste." 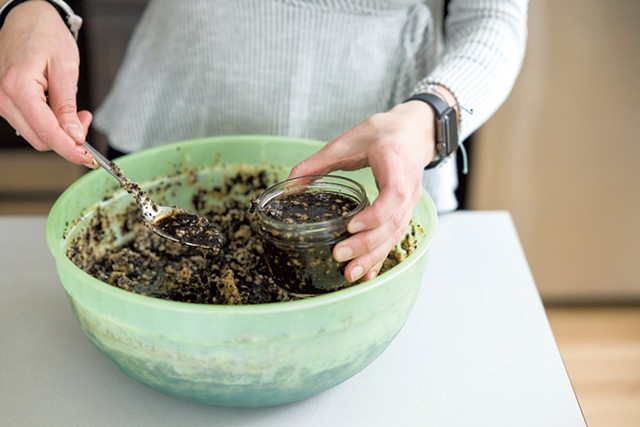 The following summer, Frendly Gathering organizers hired McCoy to lead waste-reduction efforts. In the five years she worked for the festival, its trash volume dropped from three 30-yard dumpsters' worth to a single dumpster.

After graduating in 2016, McCoy bought a van in which she could sleep and work as she traveled to the seven events she had booked. Later that year, she was invited to do a TED Talk in Tahoe about festival waste. That's when McCoy figured she should come up with a name for her business. Until then, she had worked as a single contractor, managing teams of volunteers.

By 2018, she was handling 15 events with part-time workers on her payroll. Her client roster included WinterWonderGrass at ski resorts all over the country, Planet Bluegrass in Colorado and MTV's SnowGlobe Music Festival in Lake Tahoe.

In spring 2019, McCoy joined the Vermont Center for Emerging Technologies, a Burlington-based business incubator that supports entrepreneurs and provides them office space where they can collaborate. Then she packed her bags for another festival season.

Early last year, McCoy planned to cut her time on the road and put someone else in charge of events as she shifted to diversifying the business. "I was feeling really, really good going into 2020," the CEO said. "We were just ready to build, build, build."

On March 9, 2020, the U.S. Small Business Administration named McCoy Vermont's Young Entrepreneur of the Year. That same week, all of Waste Free Earth's business evaporated. Among the 24 events the company planned to work last year was the Democratic National Convention in Milwaukee.

Waste Free Earth has pulled through but is "still operating at a significant loss," McCoy said. In February, with the help of outside funding, she was able to hire her first full-time employee, a loyal part-timer who became the company's sustainability programming manager.

McCoy has received a grant from Vermont Businesses for Social Responsibility, a federal Paycheck Protection Program loan and a state Economic Relief Grant — about $30,000 total. An iFundWomen crowdsourcing campaign netted $20,000, enabling her to create new programs.

When the pandemic subsides, McCoy wants to continue her event work, but Waste Free Earth now has two new revenue streams — one in business consulting and one for people who want to eliminate trash in their lives.

As a trial run last month, she launched the New Year Zero Waste Challenge. About 75 participants signed up at a discounted rate of $40 to have access to nearly 50 short videos offering waste-reduction guidance in various categories, including the kitchen, bathroom and travel. The Burlington-based environmental organization 1% for the Planet bought a group package for its staff.

McCoy's program made reams of available zero-waste information more accessible, said Ryan Midden, director of people and culture at 1% for the Planet. "It's contextualizing that information ... to have someone there who can really break it down for you," he said. For his busy colleagues, the program provided flexibility to incorporate changes at home. "It's really having the space to have the conversation," Midden said.

More Zero Waste challenges are slated for this year. On McCoy's web portal, people can learn how to turn an empty ice cream container into a piggy bank by cutting a slit in the lid. They can create a "zero-waste kit." McCoy revealed hers in a small fabric bag, holding a collapsible metal spork, reusable straw, cloth hanky instead of paper napkins, and Vermont-made Bee's Wrap sheet to swaddle a leftover sandwich.

Anyone can incorporate these practices, McCoy said. "We're creatures that are habit-based," she added, "and incredibly adaptable."