While shopping along Burlington's Church Street Marketplace last week, Haley Moriarty spotted the perfect graduation dress on a rack at Ecco Clothes. The high school senior from Connecticut, who plans to attend the University of Vermont in the fall, fell in love with the creamy white mini with spaghetti straps and a bow across the open back.

While Moriarty's mother mulled it over, Ecco salesperson Ava Vacherot offered them the 10 percent UVM student discount, though Haley hadn't yet started on campus. Then Vacherot slipped into the boutique's back room and returned with a black graduation gown for Moriarty to try on over the little white dress.

That clinched it. "I think it's beautiful," Moriarty said.

Her mother, Karen Moriarty, agreed to buy the $148 dress and a pair of tan sandals for her oldest daughter to wear on graduation day. They'd dropped into Ecco before dinner on Saturday, lured by bright-colored frocks in the front windows.

"I like how there's dressy, casual, shoes and accessories," Karen said, looking around the store. Of Haley, she added, "This is her style."

That's the ideal shopping experience Ecco owner Lara Heath Allen yearns to give customers in her store — especially now, after an arduous year of shutdowns, apprehension and economic devastation for retailers and other businesses. Spring is generally lively at Ecco, a go-to spot for teens and grandmothers alike to find special-occasion dresses and full finery for proms, graduations and weddings.

But a year ago, the coronavirus forced all nonessential businesses to close and events to cancel. Ecco, which also carries some men's clothing, lost two months of prime-time sales. The rest of the year wasn't much better, and Ecco ended 2020 with about 50 percent of its usual annual revenue, Allen said.

In business for 29 years, Allen had worked her way through other economic ups and downs. Never before, though, had she confronted the fear she felt after locking her doors last March, she said. Her fate was suddenly out of her control.

"Especially when you have a business for a long time, you develop a formula," Allen said. "There's a flow. Even when you go through dark times, you know you come out of them."

She had confidence in her skills as a retailer, "but this past year, it just felt like my hands were tied," she said. "And that was a really awful feeling for somebody that has always been so driven."

Allen, 53, who lives in Shelburne, grew up in Burlington's Old North End with a single mom and a younger brother. Money was tight, she said. During high school, Allen worked her first retail jobs — including at Magram's department store, where Ecco resides today — and waited tables to supplement the family's finances.

After she earned an English degree from UVM, Allen went to work for a boutique on College Street that she loved. When that store closed, Allen took over the space and opened Ecco in 1992.

She knew that Burlington needed a good source for reasonably priced dresses. When Allen graduated from college a few years earlier, her mom wanted her daughter to have something special to wear to celebrate the accomplishment, and options were limited.

"There was a really expensive store, and she sprung for it, even though we couldn't afford it," Allen said. 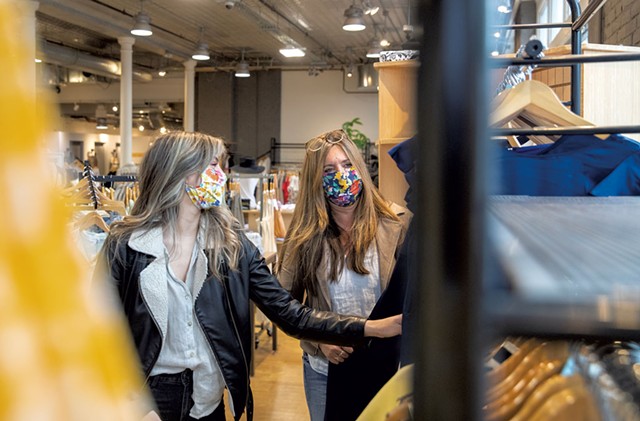 In 2009, Allen leased a 4,300-square-foot space in the Howard Opera House building at the corner of Church and Bank streets, with windows on two sides. That year, in the thick of the recession, traffic remained steady, and the volume that Ecco could sell in the large showroom helped it thrive, Allen said.

More recently, she added a few clothing lines at lower price points to supplement sales of her more expensive brands. That boosted Ecco's revenue to an all-time high in 2019, she said. Entering 2020, Allen saw a chance to relax a little, maybe travel with her two sons, as her business reached a safe level of stability.

When the pandemic hit, Ecco benefited from those foundational years. Longtime loyal customers placed orders by phone, email and online, once Allen updated the website for e-commerce. She continued to pay her staff, even during the store's closure from mid-March to early June.

Allen's team homed in on social media, constantly updating the store's Instagram feed with new inventory and curated outfits. The all-female employees — who call themselves "Ecco babes" — communicated with customers via direct message or text to pick a T-shirt in the desired shade of lavender or the right size of camouflage jogger pants.

"The community that came forward to support small businesses was unbelievable," Allen said.

Financial support also provided a crucial crutch. Ecco received two rounds of federal Paycheck Protection Program loans and a state grant. Her landlord, she said, checked in regularly to see how she was doing and sat with her on the bench in front of her store many times as she cried or fretted.

"He would give me pep talks," she said. "When we were all shut down, he let rent slide. And as I started to get back on my feet, we would come up with what would keep me going, what would keep me in business. And he would let me do that. And I'm now back to paying my full rent."

It made good business sense to offer longtime tenants like Allen the flexibility to stay afloat, said Steve Schonberg, one of Howard Opera House's owners who manages its daily operation. Ecco's continued success in such a prominent space benefits the building and all of Church Street, he added: "She has worked really hard and has built that business."

During the throes of the pandemic, Allen said, she would invariably cross paths with someone who recognized her and shared — from a six-foot distance — what a difference Ecco has made. One woman talked about a favorite green floral dress that she had bought at Ecco for a wedding years before.

"The smallest things meant the world," Allen said. "People sharing their heart with me, as they always have, and their lives with me ... Having that thread go through this past year in a really significant way was really, really important and really pulled us through."