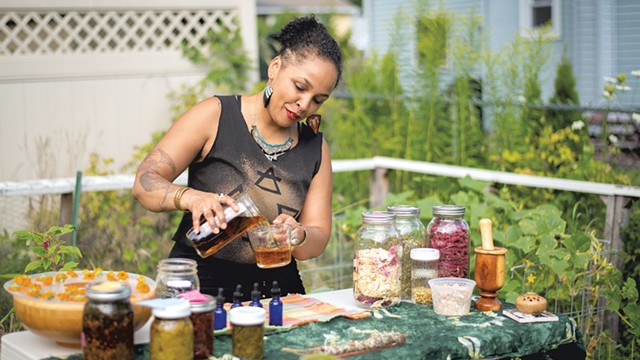 Candace Jennifer Taylor's email autoreply might come as a surprise to those used to the breakneck speed of online communication.

"Both my life and the work I do in this life is grounded in the desire to dismantle colonial rule, capitalism and dominance culture," reads the message, which says Taylor may take two weeks to respond. "The pace within which both our culture of living and working functions is rooted in the very things I seek to uproot; it's toxic, traumatic and deeply harmful. I will not live my life or curate the offerings I create for my business within that colonial pace."

It's not that Taylor doesn't want to answer emails — quite the opposite, they told Seven Days in an interview. They want more time to carefully consider the messages sent to them, as well as a healthier pace of business.

This year, Taylor is beginning work on a bigger endeavor: expanding their Winooski home and garden into a "wholeness center" where Black, Indigenous and other people of color can gather and learn.

The use of the word "wholeness" instead of "wellness" is deliberate. "Wellness has become these kind of quick little things that you can do to practice self-care," Taylor said. "To me, wholeness is about something radically larger."

In their eyes, wellness perpetuates unreasonable body standards and fat phobia and appropriates from other cultures; wholeness is about connection to the land, about ancestors and systems of oppression, and about choosing to focus on collective healing and self-love.

Before turning to food and agriculture, Taylor worked in nonprofits and higher education, focusing on gender and sexual violence and anti-oppression advocacy. It was demanding, both physically and emotionally, and they weren't sleeping well.

"The work that I'd been doing had brought me to a point of being incredibly ill and burnt-out," Taylor said. They saw the people around them getting sick, too. "I thought to myself, We're doing this wrong."

A family tragedy in 2013 caused Taylor to rethink their career plans for good. "I realized that I could do it differently and that it would be a total experiment," they said. "I said, 'How do I really want to spend this life?'"

Plants had been a part of Taylor's life since childhood, which was spent in Brooklyn and Springfield, Mass. But they think it goes even deeper than that: "It's in all of our DNA to have a relationship with plants and the land."

Taylor learned to cook from their grandmother, who viewed food as medicine. The kitchen led them to the garden. "That's where all the plants started speaking to me, and I started to see all the ways we're connected," they said.

In 2013, Taylor left their job at what was then called the Women's Center at the University of Vermont. Their first job in food was cooking for a sorority. Taylor eventually started a catering biz, called Conscious Kitchen, and about four years ago began teaching and mentoring through Conscious Homestead.

While the pandemic has been difficult for many businesses, Taylor has found that it actually propelled their work forward and solidified their role in mutual aid and community care.

Interest has grown in Taylor's products and workshops. Part of it, they said, is a reinvestment in shopping locally, particularly with BIPOC-owned businesses, in response to the pandemic and the racial justice movement that grew out of George Floyd's killing. The growing interest nationwide in gardening and self-sufficiency was reflected in Taylor's mentorship program: Over the summer it jumped from a handful of students to 15.

Meanwhile, last year Taylor launched a GoFundMe and raised $60,000 of a $100,000 goal toward building the wholeness center; the community support has boosted Taylor's confidence in their vision during uncertain times.

Work has already begun on the Winooski property Taylor shares with their partner and son. They're building a greenhouse that will double as a learning space to continue the mentorship program Taylor already offers for BIPOC people interested in botanical work. Taylor is maximizing their garden space, building a new chicken coop and adding a geodesic dome, which will house workshops, meditation and yoga classes.

While Taylor is excited to expand their programming, they also see the center as a retreat that community members can use for individual healing.

Taylor will ask people to contribute financially for workshops and events but said no BIPOC person will ever be turned away. The model will be similar to the one Taylor uses to price botanical products, in which they consider time spent working with the land as part of their compensation.

"This whole idea came to my mind because I grew my own garden ... and we always had plenty. We always had extra," Taylor said. "I'm OK, personally, not increasing the costs to cover my labor when I know I'm enjoying myself tending the garden."

Taylor said they and their husband are committed to maintaining the property and are even making plans for passing it on someday.

"I've always wanted folks to understand, as far as sustaining this project: We're going to be here. We've chosen Vermont; we're rooted in Winooski," they said.

Taylor's longtime friend and collaborator Naomi Doe Moody is the cofounder of SUSU CommUNITY Farm, a group fundraising to start a Black and Indigenous-led farm and healing space in southern Vermont. Moody said that in Vermont, BIPOC land ownership is rare.

"There's a lot of trauma that happens through land for people of color, whether they're migrants, or trafficked, or removed from their ancestral lands. And so coming together on land and with land to heal is very powerful," Moody said.

Taylor talks about building community as something that takes practice because the influences of colonialism and capitalism have divided us from our inherent instincts to connect with one another. Money, for this entrepreneur, is not the goal.

"If we can pool in our resources and actually practice being a community for real, I believe that we can care for one another and we can shift this idea of scarcity and need for competition and need for hoarding. I want to have a space where we can experiment with that, where we can practice that," they said.

After Floyd's killing by police sparked international protests calling for racial justice, Taylor worked with other organizers to coordinate a wealth redistribution document; it encourages white people to give money directly to Black Vermonters as a form of reparations for systemic racism.

Taylor didn't apply for or receive any government assistance during the pandemic. Though they are open to collaborating with nonprofits, navigating the paperwork and bureaucracy of the philanthropic world is a barrier for grassroots efforts. Taylor is invested in the concept of mutual aid, in which community members support each other and exchange resources, often outside the bounds of established institutions and nonprofit organizations.

In 2020, Taylor began offering free care packages to BIPOC people. Taylor provides the herbal products, and individuals who wish to contribute can buy sponsorships to cover the cost of bottles, packaging and shipping. In September, Taylor sent some 65 care packages to BIPOC people in Vermont and elsewhere; they sent another 115 in December. They are currently working on a third round.

"BIPOC people in this world are experiencing incredible trauma," Taylor said. "We're afraid of dying if we walk out of our home. This is acute trauma. So to give ourselves some love, even if it's a little face mist — that is actually radical. It's a radical and important and necessary thing to do."

Bottom Line is a weekly series on how Vermont businesses are faring during the pandemic. Got a tip?Email bottomline@sevendaysvt.com.

The original print version of this article was headlined "Growing Community | In Winooski, Candace Jennifer Taylor creates a "wholeness center" for BIPOC healing"