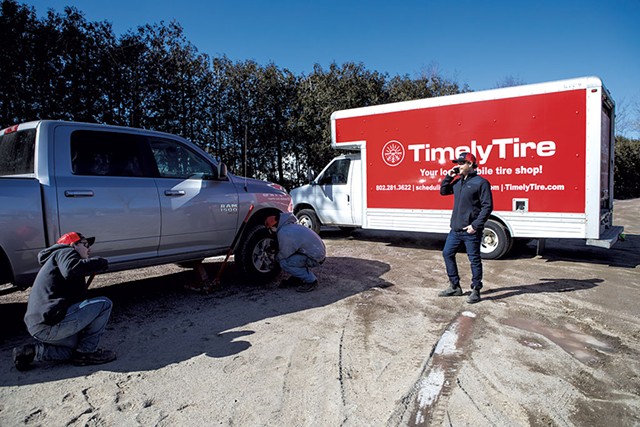 When Ari Moskowitz first thought of creating a mobile tire rotation and repair service a few years ago, the driving motivator was to save people time.

Moskowitz and his wife moved to Burlington six years ago from New York City, where installing snow tires on one's vehicle doesn't have the same urgency as it does in Vermont. But Moskowitz said he became "totally frustrated" by all the time he spent getting snow tires mounted each fall, then removed each spring, especially because he and his wife both work and share one car. Whether he was sitting in waiting rooms or taking Uber and Lyft rides back and forth to the shop, "I felt there must be a better way," he said.

Moskowitz began researching the feasibility of launching a mobile tire service and discovered that the concept was already popular in Canada. So he reached out to the owner of one Canadian business and offered to pay him for his insights, figuring they'd never compete for customers. For $500, Moskowitz got all his questions answered.

In search of someone more mechanically inclined than himself, Moskowitz landed on Michael Carroll-Sherwin. The University of Vermont graduate with a degree in mechanical engineering had once worked for a company that built robotic equipment that detects unexploded land mines. The two, who at the time worked together at a renewable energy firm in Williston, founded Timely Tire in December 2019.

Though changing a tire isn't rocket science, building a system for mounting and balancing them that operates on a trailer and is powered by a generator is more complex than it might seem, Moskowitz said. The partners found a manufacturer of tire-changing equipment in Montréal and invested $100,000, not knowing whether the concept would catch on in Vermont. Timely Tire changed its first tire on April 11, 2020.

"The money is nice, but I'm more excited about doing something that makes other people's lives easier." Ari Moskowitz tweet this

What began as a service based on convenience quickly capitalized on consumers' concerns about social distancing and personal safety. After Gov. Phil Scott issued his "Stay Home, Stay Safe" order last March, car dealerships and their service departments closed. Though automotive repair shops qualified as essential services and were allowed to remain open, many saw their traffic dwindle, as some customers didn't feel safe sitting in a waiting room for extended periods of time. Especially in the first few months of the pandemic, Moskowitz recalled, "A lot of people were very specific: They didn't want us inside their car."

Fortunately, Timely Tire didn't need to go there. Its crew shows up at a customer's home or workplace, then uses mobile jacks to lift the vehicle, swap out the snow tires, or fix or replace flats. The company's service area extends about an hour's drive from Burlington, which includes all of Chittenden County, as well as Stowe and parts of the Mad River Valley.

During the first few weeks after the business opened, Moskowitz and Carroll-Sherwin were performing all of the labor themselves, marketing with Facebook posts and advertising on Front Porch Forum. With thousands of Vermonters suddenly working remotely, appointment requests poured in.

"I started coming home to 40, 50, 60 emails. It was just insane," Moskowitz recalled. By October, Timely Tire had so many inquiries that the company shut down its marketing with the exception of posting classified ads for new employees. "We're just trying to tame the dragon right now," he said, noting that appointments for the spring are booked out weeks in advance.

In addition to hiring more staff — the company is up to half a dozen employees — it invested in more trucks, jacks and tire-changing equipment. By next month, the company's three fully outfitted vehicles should be operational, Moskowitz added. In the last few months, Carroll-Sherwin left the company to pursue another career opportunity.

Timely Tire has recently begun offering other automotive services, such as brake jobs, oil changes, wiper replacements and interior detailing. About the only tire work it can't do are wheel alignments. But for people who normally would drive an hour or more to the Burlington area for auto maintenance, Moskowitz said, "It's a real game changer."

That's true in more ways than one. When Timely Tire showed up last fall to install snow tires for elderly clients who live alone, several told Moskowitz that the crew members were the first people they'd spoken to face-to-face in more than six months.

Customers pay more than they would at a brick-and-mortar automotive center, mostly for the convenience. The price is determined by the customer's location; someone in the Burlington area would pay $125 per vehicle while someone farther afield would pay more, depending on the distance. That's compared to about $100 at tire shops. As an incentive, the company offers discounted rates for multiple vehicles.

Since last year, Timely Tire has inked deals with several corporate clients, including a Chittenden County tech company, an outdoor gear manufacturer and a local trucking firm. Timely Tire either services the companies' fleet vehicles or offers group discounts for its workers. Because its employees won't have to spend weekends or lunch hours sitting in the shop, Moskowitz said, "I think it's a no-brainer."

"They came in, they professionally changed and balanced my tires, and it gave me the opportunity for freedom to work on my schedule," said Chaim Lodish of Burlington, in a video posted last spring to the company's Facebook page. "I didn't have to go to a shop. I didn't have to leave my car. I didn't have to carpool with my wife ... It was fantastic."

Though Moskowitz didn't disclose what he pays employees, most of whom are in their late teens or twenties, he said he offers competitive wages and often buys his staff lunch. And many, he noted, prefer working on a mobile crew because they're not stuck indoors all day.

The company still faces some unknowns, Moskowitz acknowledged, including whether demand will continue once the pandemic ends. And since the company launched last year, a few other Vermont automotive businesses, including one in Colchester and another in Barre, have launched their own mobile services. Nevertheless, Moskowitz seemed unconcerned by the competition.

"The money is nice," he added, "but I'm more excited about doing something that makes other people's lives easier."

Clarification, April 1, 2021: The original version of this story did not mention that Carroll-Sherwin is no longer affiliated with Timely Tire.