Bottom Line: How Play It Again Sports Traded Team for Solo Athletics Amid the Pandemic 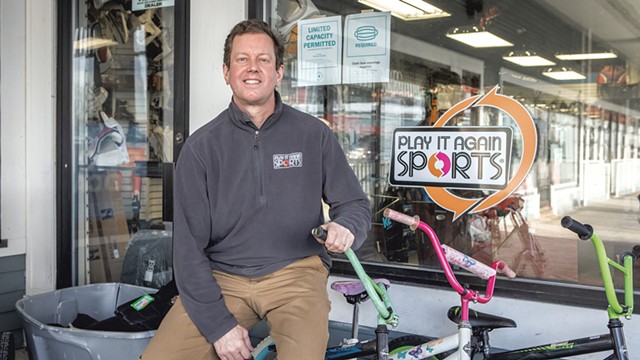 For Duncan Macdonald, co-owner of Play It Again Sports in South Burlington, his experience with the pandemic last spring typified the immortal words of baseball legend Yogi Berra: "It ain't over 'til it's over."

For nearly three decades, Macdonald and his wife, Julia, have owned and operated the Vermont franchise of the national retail chain that sells new and used sporting goods and apparel. Pre-pandemic, the lion's share of the store's sales revenue came from athletic equipment for team sports — notably ice hockey, baseball, lacrosse and soccer. Located in the southeast corner of South Burlington's Blue Mall, Play It Again Sports has an entire room devoted to new and used hockey gear, much of which is used by scholastic and youth leagues.

But last March, COVID-19 forced schools throughout Vermont to switch to remote learning, effectively ending all team sports for the remainder of the school year. Many Vermont summer camps, which normally include hockey and other team sports, were also canceled.

Macdonald shuttered the store on March 16, did a small amount of curbside business in May and didn't reopen to in-store traffic until June 1. With thousands of dollars' worth of inventory on his hands and no one to buy it, the 55-year-old South Burlington native saw little chance of coming out ahead for the year.

"April was just brutal," he said.

And yet, it wasn't wasted time. Macdonald temporarily laid off six of his nine employees, most of which were high school and college students who worked part time. With the remaining three, he took the month of April to create a website, something the store had never had since it opened in 1993, and put all the inventory online.

Winmark, the parent corporation of Play It Again Sports, offered all of its franchises use of its national web portal. (The company also franchises other locally owned retailers, including Williston's Once Upon a Child, for children's clothing; Plato's Closet, for young adult apparel; and Style Encore, for women's professional wear.) Internet shoppers who find items through Winmark's website are automatically directed to the individual store's web page.

However, one precondition for using the chain's website, Macdonald explained, is that each franchise must post a minimum of 500 items it has in stock, including three to five photographs of each one.

But even as the spring and summer sports teams were sidelined, Play It Again Sports racked up huge wins in the second half of the year from Vermonters' insatiable desire to stay active. With people forced to stay home, socially distance and recreate outdoors, the market exploded for solo athletic gear, including bicycles, golf clubs, tennis racquets, Frisbee golf discs and home exercise equipment.

"Anything you can do individually was just on fire," Macdonald said.

That wasn't only a local phenomenon. In January, a spokesperson for outdoor gear retailer REI told the Washington Post that snowshoe sales quadrupled in 2020 compared to the previous year.

And just last week, Jim Barr, CEO of Nautilus, a leading manufacturer of home gym equipment and stationary bikes, told industry analysts that the fourth quarter of 2020 was the best in the company's 35-year history. The only reason sales weren't even better, Barr noted, was a severe global shortage of shipping containers, which prevented products from reaching consumers.

For Macdonald, such unprecedented interest in solo activities carried the store through the fall and into the winter, when he saw "crazy demand" for snowshoes, ice skates and especially cross-country skis, the last of which he called "the poster child" for unmet demand.

And that demand has yet to subside, for used and new equipment alike. The store's name notwithstanding, 60 percent of Play It Again Sports' revenue comes from the sale of new merchandise.

Assuming, that is, Play It Again Sports can keep it in stock or replenish its inventory. Salomon and Rossignol, two of Macdonald's largest ski equipment suppliers, were completely sold out by early December and had nothing left to offer retailers. Cross-country gear is now virtually impossible for Macdonald to source.

"Of the first 10 calls I received this morning, seven of them were [from] people looking for cross-country gear," he said last week. "And my used-skate wall? Completely empty."

Sales last year were down overall compared to 2019, largely due to the store's two-and-a-half-month closure. Macdonald secured a federal Paycheck Protection Program loan — he declined to reveal the amount — and by year's end had rehired all but one of his laid-off employees. In fact, business was so brisk in the second half of 2020 that Macdonald did not apply for a second PPP loan. The store's new web presence resulted in some online sales, he said, but its bigger impact has been in attracting more locals into the shop.

Whether 2021 will continue its winning streak is difficult to predict, especially with regard to scholastic team sports. According to Jay Nichols, executive director of the Vermont Principals' Association, the committee that will make its recommendation to the governor on the spring athletic season just began its discussions on February 25. In an email, Nichols said it will likely be weeks before a decision is announced.

"I don't really know. My hope is that a fair number of them do," Macdonald said. "I think it's great if people are getting outside and, if they're more active and healthy, it benefits everybody."

And if not, he added, "we'll have a great used selection a year or two from now."