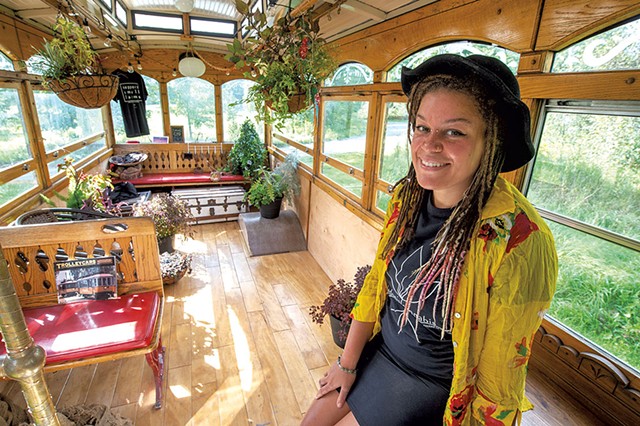 Castleton native Arantha Farrow was just 4 years old when her father, a Black man from Zimbabwe, applied for a green card to stay in the U.S. with his family. But when immigration officials saw that he'd once been detained for an eighth of an ounce of marijuana, an incident Farrow describes as racial profiling, he was instead deported. Farrow and her younger brother, who was 2 at the time, wouldn't see him again for another 20 years.

Nearly a quarter century later, Vermont's prohibition on cannabis has ended. Today, Farrow is the owner of Caledonia Cannabis, a company she founded in 2018 to provide high-quality cannabidiol (CBD) products grown by organic farms in the Northeast Kingdom.

"One thing that's beautiful about working with cannabis in this way is that it can allow people to live off the land in a small-scale permaculture and have success doing so," she said.

The survival of Caledonia Cannabis was anything but assured when the pandemic hit. But now, due in part to COVID-19, it's on a roll.

Farrow, 28, grew up with her mother's family in a Castleton church-turned-art-studio created by her late grandfather, Patrick Farrow, a famous metalworker and sculptor and brother of actress Mia Farrow.

Arantha Farrow did some farming when she was younger, then worked on cannabis farms on the West Coast, where she learned more about the plant's therapeutic properties. About four years ago, she moved into a cabin near Hardwick with her mother and brother and became part of Vermont's budding hemp industry.

In 2019, just as her CBD business was getting off the ground, Farrow was hired by an out-of-state investor, who had no previous experience in the cannabis industry, to be his project manager on a 50-acre hemp farm in the Northeast Kingdom.

But after the investor purchased the wrong type of drying equipment, production bottlenecked, and Farrow scrambled to find barns to hang and dry their plants. The investor ultimately lost money on the enterprise, and Farrow and other hemp farmers were never paid for their efforts. Farrow had planned to use that money to travel to Zimbabwe to see her father again.

Stung by that experience, she vowed to work only with small Vermont producers.

"I believe that there's inherently a higher quality of anything that's grown on a small scale," Farrow explained.

To that end, she joined with about 10 NEK growers to sell their plants under one brand. After the 2019 fiasco, she moved to New York City to explore the market for Vermont-branded cannabis goods, such as the full-spectrum CBD tincture she makes. She was negotiating bulk-sales deals when the pandemic virtually ended all commercial activity in the city. When things "really started to get funky," Farrow said, she grabbed her belongings, jumped on a train and fled back to Vermont.

But the situation wasn't much better for her business back in the Green Mountain State, as a national shortage of ethanol temporarily halted her CBD tincture production. And as a sole proprietor with no employees, Farrow didn't qualify for any state or federal COVID-19 relief funds. For a while it looked like Caledonia Cannabis might get snuffed out.

Then, at the end of April, Farrow saw an old trolley for sale on Craigslist. A New Hampshire man had been planning to use it for group tours when the pandemic hit.

"I didn't realize I was looking for it," she said, "but it was kind of a COVID solution for what I had going on."

Farrow doesn't know the history behind the vehicle, which is essentially an old streetcar body welded onto a modern bus frame. But she immediately fell in love with it "and spent a few days trying to rapidly justify how it made sense for my business."

Ultimately, it did. Farrow bought it, painted it white, removed the seats and turned it into a mobile retail outlet. She now takes her "Cannaboose" to vending sites such as Church Street Marketplace and the Burlington Farmers Market, where she can sell her products right out of a window. Or customers can come inside and browse her wares, which include pre-rolled CBD joints, teas and loose flowers. When the pandemic subsides, she plans to put the seats back in and offer guided cannabis farm tours in the Northeast Kingdom.

The crisis has also helped Caledonia Cannabis, she noted, as consumers have become even more invested in maintaining their health and well-being. Though U.S. Food & Drug Administration regulations prevent Farrow from making unproven claims about her CBD products, she describes cannabis as an "adaptogenic" plant that can help the body cope with stress and normalize bodily functions.

"We are in a huge crisis right now, in so many ways, and the collective is feeling anxious and overwhelmed," she added, "so CBD can be super supportive."

Caledonia Cannabis is supportive in another way: In addition to selling CBD products, Farrow sells handmade goods by Zimbabwean artisans she met through her father, who still lives there. For Farrow, who grew up in Vermont "being a nonwhite-passing person, and also having a complex for not having access to that culture," selling those goods has been a way for her to reconnect with her roots, benefit the people of Zimbabwe and, in a "full-circle kind of way," she said, give new meaning to her father's deportation.

"If I make money in this venture, it will go directly to Africa," she added, "so I can help equalize a world that is so dangerously out of balance."

Bottom Line is a series on how Vermont businesses are faring during the pandemic.

Got a tip? Email bottomline@sevendaysvt.com.

The original print version of this article was headlined "Yes, I Cannabis"