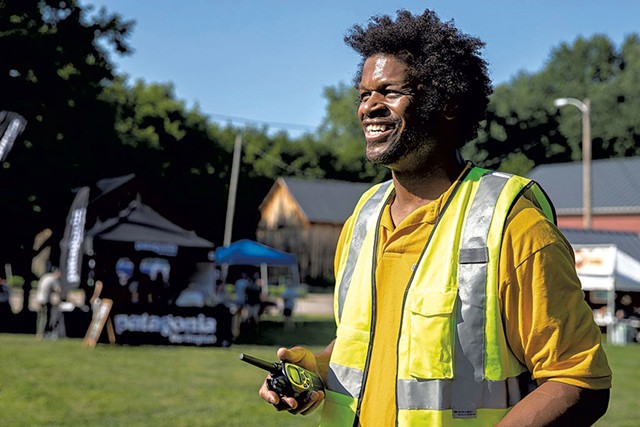 Michael "Mikey" van Gulden, founder and owner of Chocolate Thunder Security in Burlington, was on his way to see his accountant in the first week of March when he heard the news on the radio. Austin, Texas, had just canceled South by Southwest, the annual music, film and interactive media festival that normally brings tens of thousands of visitors and hundreds of millions of dollars into the city.

"I was like, 'Oh, my God! This is the largest event that I know of for event planning in the country ... and it's closed because of the pandemic,'" van Gulden recalled. "'There's no reason it's not going to shut down every event that's smaller.'"

Indeed, within two weeks, at least 20 jobs on van Gulden's calendar were canceled, including five sorority parties, three weddings and the annual Vermont Brewers Festival at Killington Resort. On March 17, he informed his staff that, for the foreseeable future, they would not be working security at Fletcher Free Library, which the City of Burlington closed due to COVID-19.

On Saint Patrick's Day, normally a time for reveling in the green of abundant employment, Chocolate Thunder instead found itself in the red.

The 52-year-old Williston native founded his security company on April 1, 2010. As fans of professional basketball might guess, van Gulden named the company after the late Darryl Dawkins, who was given the nickname "Chocolate Thunder" by musician Stevie Wonder.

Since then, Chocolate Thunder has found employment at venues all over the state, handling operations such as ID checks, crowd control, parking detail and monitoring of event attendees for alcohol overconsumption. Van Gulden's licensed, yellow-shirted staffers have worked fraternity and sorority parties, concerts, beer festivals, and the Seven Days annual Daysies award ceremony at ECHO Leahy Center for Lake Champlain, which was also nixed this summer.

By late March, with no jobs on the horizon and 15 employees sitting idle, van Gulden asked himself, "How do I find work in the pandemic? There's got to be something else out there," he recalled.

Then he walked into a supermarket in Burlington's New North End, and an answer appeared: Faced with the prospect of a monthslong quarantine, people were panic shopping. Van Gulden watched as they stripped the store's shelves bare, filling their carts with pasta, meat, canned goods and toilet paper. Having worked security at large festivals, he knew how quickly crowds can get out of control.

"It turns out that we're doing more business this quarter than we were at this time last year." Mikey van Gulden tweet this

Van Gulden approached the store manager and made a pitch for his company's services. Even before he heard back from that store, though, he got a call from City Market, Onion River Co-op, asking if his security staff was available to help maintain a healthy and safe environment at its two Burlington groceries.

Within days, van Gulden's staff was stationed at the stores' entrances, enforcing the mask mandate and capacity limits, handing out gloves, and pointing out hand-sanitizer stations. The initial three-month gig was soon extended.

A college campus was another source of work. In August, as students began returning for the fall semester, Middlebury College asked Chocolate Thunder to control access to the campus and enforce a visitor quarantine and COVID-19 safety protocols.

In the spring, Chocolate Thunder had qualified for a federal Paycheck Protection Program loan to retain its employees. In September, van Gulden crunched the company's revenue numbers and was surprised by the results.

"It's strange," he said. "It turns out that we're doing more business this quarter than we were at this time last year."

The nature of the work has changed, too. These days, Van Gulden and his staff deal with far fewer drunk and belligerent patrons; they're more likely to encounter pandemic naysayers and shoppers who bristle at wearing masks. On two occasions, he said, he was told that wearing a mask is "un-American."

"Maybe breathing through a respirator is more American?" he quipped.

Van Gulden remains uncertain how his company will fare through the winter. But the business named after an NBA star famous for backboard-shattering slam dunks has pulled off its own nifty pivot.

"I'm thankful for every opportunity that I ever have, because a lot of what I've been able to earn is based on people's faith in me," van Gulden said. "I'm an optimist to a fault that something good will come out of all of it."