Bottom Line: Bee’s Wrap in Middlebury Offers a Sustainable Alternative to Plastic Wrap in the Kitchen

As Vermonters emerge from the pandemic and begin to take stock, many may be inspired to purge the clutter. We'll cull our mask collections to a handful of favorites. We'll cancel subscriptions to niche streaming services such as Crunchyroll and Pluto TV. That trusty (and crusty) pair of work sweatpants will hit the dumpster, and we'll tire of the mountain of plastic to-go containers from a year-plus of takeout .

Of course, plastics in the kitchen were a problem before the pandemic. According to a 2020 article in Science Advances, the average American produces 231 pounds of plastic waste per year. Single-use plastics such as plastic wrap and food containers comprise about half of that trash. One need only look west — specifically to the Great Pacific Garbage Patch, a mass of trash twice the size of Texas floating off the coast of California — to understand why those numbers are bad.

A Middlebury company aims to reduce our dependence on plastic wrap one sandwich or half avocado at a time. Since 2012, Bee's Wrap has championed a shift to sustainable food wraps. Made of organic cotton and coated with pesticide-free beeswax, the certified B Corp's products have earned the praise of eco-friendly foodies from Bon Appétit to EatingWell to Buzzfeed. Even Oprah Winfrey is a fan.

"If you recognize the problem that plastic has become in the world, and you want to be a part of the solution, Bee's Wrap is for you," CEO Tara Murphy said in a recent interview at the company's headquarters — aka the Hive. "It's a sustainable, easy, simple-to-use, clean way to store your food."

Murphy marveled at how much Kaeck managed to grow her Vermont company, which she founded in her New Haven home. "I don't think she ever envisioned herself as a CEO of a company," Murphy said. "So to go from making Bee's Wrap in her kitchen to what she built is amazing."

Kaeck sold her products first at farmers markets, then at small local and regional stores. The company moved from Kaeck's basement to a small factory in Bristol, then to its current home in a warehouse and office space on Exchange Street in Middlebury.

Bee's Wrap employs "around 20 people," Murphy said, and sells products in multiple countries, averaging about $10 million in annual sales — at least in non-pandemic years. While describing how company is rebounding, she estimated that COVID-19 caused "about a 30 percent" loss due to supply-chain disruptions and distribution and retail challenges.

Bee's Wrap's primary clients are specialty retailers and gift shops, many of which closed or did limited business during the pandemic.

"A significant amount of our sales are that kind of impulse shopping, where you're going to a specialty store because you want to browse, you're looking for a gift," Murphy said. "We're a product that gets discovered in that shopping journey: What do you give your millennial?" 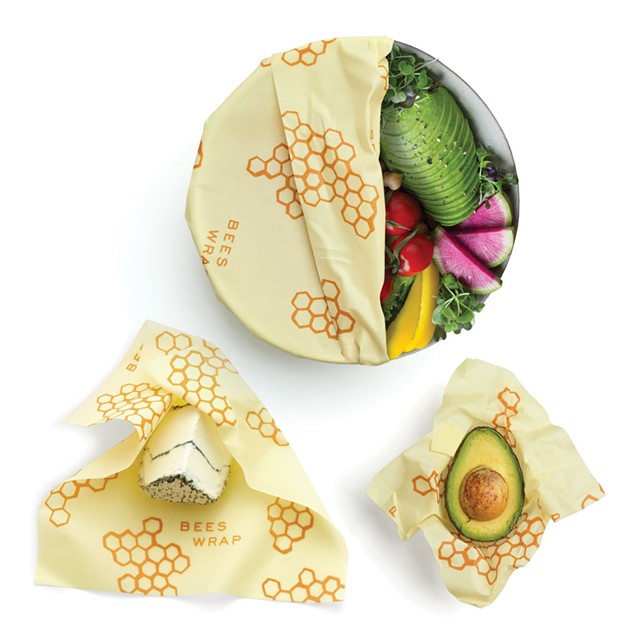 Bee's Wrap, which comes in a variety of colorful patterns, is washable and reusable. And it's breathable — a quality that, along with the natural antimicrobial properties of beeswax, helps keep food fresh longer than plastic wrap. Murphy noted that beeswax is also malleable. You can use the warmth of your hands to mold Bee's Wrap around the edge of a bowl or plate, she explained, and when the wrap cools, it holds its shape and seal.

Bee's Wrap is also ethically sourced. The company buys 75,000 pounds of beeswax annually from suppliers in the U.S. and Africa, all of which is pesticide-free — as in, good for bees.

"We support an enormous amount of pollination," Murphy quipped, adding that beeswax is a naturally renewable resource, a by-product of beekeeping that can be safely harvested without harming the bees or their honeycomb.

That doesn't mean Bee's Wrap has no drawbacks. "It's expensive," she conceded.

Assorted three-packs of Bee's Wrap retail for $19. A variety seven-pack costs $42. A single XXL roll, vegan or regular, runs $30. Compare that with a $4 roll of Saran Wrap, and it's evident that outfitting your kitchen with Bee's Wrap could be pricey.

"If you identify one thing in your kitchen — 'I'm never gonna pull out plastic wrap for bread,' let's say — you'd be surprised how much less plastic wrap you use," she said.

Much like switching from bottled water to reusable bottles or from plastic shopping bags to totes, an investment up front in a sustainable product like Bee's Wrap can save consumers money in the long run, Murphy said. It can also be habit forming.

"Once you get into Bee's Wrap, you can't live without it," she said.

Writers at the food website Epicurious agree. In a 2019 test of several beeswax wraps, Emily Johnson named Bee's Wrap the best all-around option on the market. "Bee's Wrap excelled at every job I threw at it," Johnson wrote, praising its versatility, pliability and stickiness. She did note that cleaning Bee's Wrap can be "moderately annoying" when food sticks to the wrap and requires scrubbing. But overall, she wrote, "Bee's Wrap is aesthetically pleasing, effective, and a fun (yes, fun) way to reduce plastic waste."

In the eco-minded Green Mountains, Murphy believes the company can lead significant change, particularly given the state's ban on single-use plastic bags.

"To me, that says we have an opportunity of getting rid of single-use plastic as more of a mainstream concept," she said. "And that lends itself to saying that Bee's Wrap should be available in your grocery store, at mass merchants. That's where I think we're headed."

The key, she said, is to educate consumers on sustainable alternatives to old standbys.

"It's changing habits, which is so hard," Murphy said. "You have to take a leap of faith and say, 'I want to make a difference in my kitchen.'"