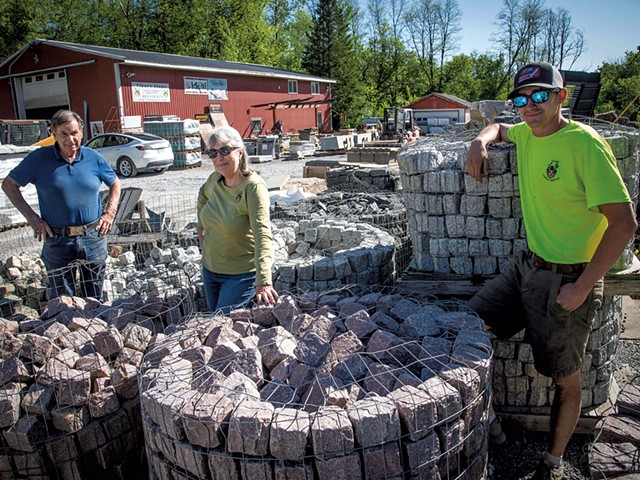 G. Jean Brgant, owner of Cleary Stone in Richmond, likened her company's pandemic year to the Cirque du Soleil show KÀ. Unlike traditional theatrical productions, the acrobatic performance has no fixed stage but unfolds on perpetually moving platforms that are meant to simulate ocean waves.

"I don't feel like we've had solid ground under us," said Brgant, whose husband, company CEO John Cleary, founded the business in the early 1990s. "Everything has been very fluid."

Brgant's choice of metaphors was unexpected, given that the business is about as rock solid as they come — both the products it sells and current demand. Cleary Stone sells bricks, pavers, cobbles and natural stones that are used to make patios, walls, garden paths and other landscaping. Some are purchased from suppliers throughout the Northeast and eastern Canada; others are dug from the company's 14-acre Emerald Mist quarry, a one-mile-deep vein of basalt schist in Waitsfield.

"It quickly became apparent that all our socialization had to happen outside." G. Jean Brgant tweet this

Brgant and Cleary spoke with Seven Days on a rare weekday when both had time to sit down. Since April 2020, Cleary Stone's phones have been ringing nonstop with calls from contractors and homeowners looking for materials that have become difficult to source during the pandemic.

"Lots and lots of people started putting in patios in their backyards," Brgant said, "because it quickly became apparent that all our socialization had to happen outside."

Cleary, who's 80, is a self-taught mason who started selling stones as a consequence of criminal activity — not his, someone else's. After a thief broke into Powderhorn Sports, the Williston gun shop he founded, Cleary decided to "build a bulletproof building that they couldn't rob." So he went to work constructing one out of stone. (Cleary's son Bill now owns the store.)

During construction, Cleary set aside the stones he didn't like, then discovered that there was a market for reselling them. As he remembered thinking at the time, "If someone's willing to buy junky old stones, what are they willing to pay for good ones?"

He and Brgant launched Cleary Stone with nothing more than a quarter-ton Toyota pickup. The company soon earned a reputation for reliability and delivering on its promises. When the previous owner of the Waitsfield quarry was retiring and ready to sell it, two other potential buyers were also interested. But because Cleary and Brgant had always paid him on time, he sold it to them.

Today, the company is still a small family operation, with an excavator, a tri-axle truck and several forklifts, one of which their grandson, Alexander Bergeron, 30, deftly maneuvered around the yard during his grandparents' interview.

Bergeron has been a fixture at the business since he was 3, Cleary noted. He would sit on his grandfather's lap while Cleary operated a skid steer, which the toddler called "the kid stealer." His mispronunciation proved prophetic.

"Every couple years I'd buy him something bigger — an excavator, a front loader," Cleary recalled about his grandson and sole employee, who will eventually take over the business when his grandparents retire. "It just kept sucking him in."

In March 2020, Cleary and Brgant were still in their Florida home, where they winter while Bergeron runs the business during its slow season. But as cases of COVID-19 began spreading across in the U.S., Brgant recognized that Floridians weren't taking the pandemic seriously, so "we got back into the borders of Vermont, where we knew we were going to be safe."

Like most business owners, Cleary and Brgant had no idea how the pandemic might affect their industry. In April 2020, the company secured a Paycheck Protection Program loan of $15,000, which it paid back within two months because, as Brgant put it, "all hell broke loose." Because people were stuck at home and not spending money on travel and other discretionary purchases, demand skyrocketed for businesses in the home-improvement industry.

Several friends asked Brgant why she paid back the company's PPP loan when it appeared the federal government would forgive most of that debt.

"My sense of integrity says that's what I'm supposed to do, because I didn't need it," she explained.

But the boom in demand also created supply chain problems for Cleary Stone. In normal times, Brgant explained, when she calls a supplier in Pennsylvania or Montréal to buy, say, manufactured pavers, the order will arrive within three days. Today, she said, it can take three days just to get confirmation of an order — and then another three to six months before supplies are delivered.

Another unexpected complication has been transportation. As Brgant explained, their business relies on so-called "back hauls." When they need a delivery from a supplier in Westford, Mass., they don't pay for a truck to drive there empty and pick it up. Instead, they find a Vermont-based trucker who's making a delivery near Westford who can then pick up their order and drive it back.

However, with many other industries idled, Brgant said, back hauls have been harder to secure.

"In our business, transportation is a big deal because what we do is heavy," she said. "We don't sell toilet paper in this yard."

"Should we admit this?" Brgant asked her husband, who nodded. "We had the best year we ever had."

"And this year might be even better," she added.

In fact, Brgant doesn't expect demand to decline even as the pandemic wanes. For many Vermonters, COVID-19 was a "game changer," reminding them of simple pleasures: barbecues on the patio and sitting around a firepit with friends.

"People now understand that there's a different way of living," she said, "and there's something to be said about enjoying life."