Bottom Line: A Tough Year of Business for US Sherpa Is Bookended by a COVID-19 Wave in Nepal | Business | Seven Days | Vermont's Independent Voice

Bottom Line: A Tough Year of Business for US Sherpa Is Bookended by a COVID-19 Wave in Nepal 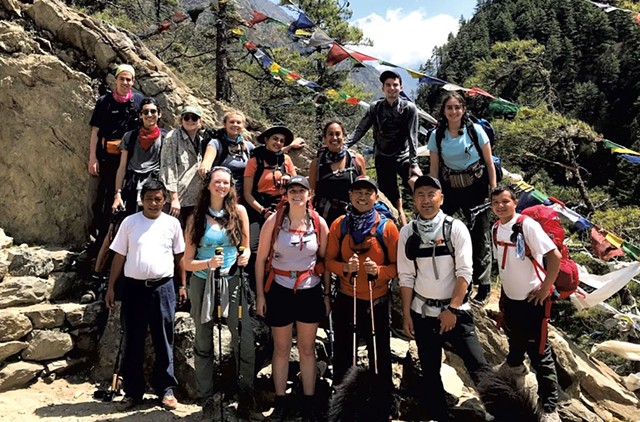 Ongyel Sherpa knows a lot of people in high places. The 41-year-old businessman is founder and CEO of US Sherpa, a Williston-based Himalayan trekking company and supplier of Nepali-made apparel and accessories. US Sherpa employs four people in Vermont and supports more than 300 artisans in Nepal, including several members of Sherpa's extended family.

A common surname in Nepal, the word Sherpa also refers to an ethnic group from the Himalayan region known for its mountaineering ability. Ongyel Sherpa was born and raised in Nepal's capital of Kathmandu. His parents are from Khumjung, a small village in northeastern Nepal at an altitude of 12,300 feet.

Living and working at such elevations can bring many hazards, including sudden storms, rock slides and the perils of guiding climbers up some of the world's tallest peaks. In April 2014, Sherpa's cousin, Chhiring Ongchu Sherpa, was among 15 Nepali guides killed in an avalanche on Mount Everest.

But Ongyel Sherpa, his family and the business that's become their lifeline now face another daunting threat — a second wave of the coronavirus that is sweeping through Nepal. The nation of 30 million people has recorded more than 600,000 COVID-19 cases and more than 8,300 deaths, but experts believe the actual toll is much higher, according to a May story in the New York Times. As hundreds of thousands of Nepali workers return home from neighboring India, which itself is being ravaged by the disease, they are straining Nepal's already beleaguered health care system.

A series of fortuitous events in 1998 helped land Sherpa in Vermont. At the time, he was 18 and still living in Kathmandu. Hoping to help support his family, he went to an interview for a job that would take him to Japan. But by the time he arrived, all the positions had been filled.

"I'm giving my entire energy to something I truly love." Ongyel Sherpa tweet this

Crestfallen, Sherpa returned home, only to answer a phone call later that day from Dr. Geoff Tabin, an ophthalmologist then based in Burlington. Tabin is cofounder and chair of the Himalayan Cataract Project, which works in some of the world's poorest countries to prevent and reverse treatable blindness.

One of Sherpa's uncles had guided Tabin, an accomplished mountain climber, up Everest in 1988. A decade later, the physician returned to Nepal and was working in a nearby eye clinic when he called Sherpa's family to say that he had brought them a gift. Sherpa's father invited his son to come with him to pick it up.

Sherpa was shy at the time and could speak little English. But, he recalled, "the moment we met, [Tabin] was very energetic [and] very positive." The young man told the physician that he hoped to visit America one day. "Going to the U.S. was beyond my imagination," he added.

On the spot, Tabin invited Sherpa to come to Vermont and help take care of his kids, then wrote him a sponsorship letter so he could obtain a visa. Sherpa arrived in Burlington in April 1998, overwhelmed by his unexpected good fortune. As he put it, "I felt like I was one out of a million people."

Tabin’s family welcomed the Nepali teen like one of their own, Sherpa recalled. Though he had expected his visit would be temporary, Sherpa soon began attending Burlington High School and eventually graduated from Rice Memorial High School. In 2005, he earned his bachelor’s degree from Champlain College, becoming the first member of his family to obtain a college education.

That same year, Sherpa launched US Sherpa to help support his family and share Nepali culture with Americans. The business has two components: guided mountain treks in Nepal, and the sale of items such as hats, gloves, slippers, scarves, tote bags and blankets, all handmade in Nepal using traditional methods and materials.

In 2012, Sherpa devoted himself to the business full time and now sells his products in hundreds of stores nationwide, including the Vermont Country Store, Outdoor Gear Exchange, Phoenix Books, and the Peace & Justice Store in Burlington.

Amy Crosswhite, the Peace & Justice Center's fair trade store and program manager, explained that many customers are tourists who chance upon the shop and are unaware of its social justice mission. US Sherpa, she said, perfectly aligns with the store's educational aim to help patrons shop with global impacts in mind.

"We tend to have quite a lot of vendors, but we have a strong relationship with Ongyel and US Sherpa," Crosswhite added. "And their stuff sells well." 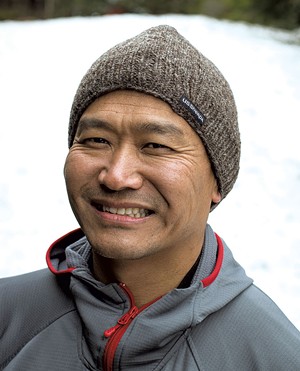 "I'm giving my entire energy to something I truly love," Sherpa said. His company's products "really show where we come from and who we are."

But the pandemic has been a treacherous journey for the business. US Sherpa's artisans have had trouble accessing raw materials, and widespread store closures in the U.S. last year forced the company to scale back production by about 20 percent, Sherpa said. With fewer planes flying internationally, shipping costs nearly doubled, while delays at U.S. Customs in New York City hampered the arrival of goods to American retailers. The financial hardships were further compounded by widespread postponements and cancellations of guided mountain treks.

Normally, Sherpa returns to Nepal twice a year. In 2020, he made the trip just once, in February and early March — at the start of the pandemic. When he returned again this March, Sherpa noticed that tourism was still down dramatically.

Last year, US Sherpa received a small Paycheck Protection Program loan, as well as some state assistance; Sherpa declined to say how much he received. But his company used the downtime to rebrand and launch a new logo, which is composed of two mountain shapes: Mount Everest on the top and Mount Mansfield on the bottom. The blue center symbolizes US Sherpa — "The place," Sherpa explained, "where the Himalayas and Green Mountains overlap."

In recent weeks, Nepal has eased some of its pandemic restrictions, allowing international visitors to return to the country in time for mountaineering season. While this is good news for US Sherpa and its Nepali craftspeople, Sherpa knows that the pandemic is far from over. He's hoping that some of Vermont's recent good fortune in overcoming COVID-19 will soon extend to his home country and its people.

The original print version of this article was headlined "Elevated Anxieties"