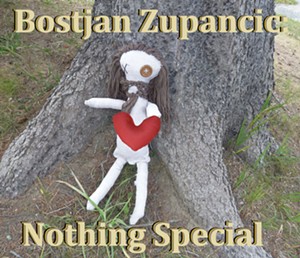 You ever go to a potluck dinner where someone has made a really strange dish? It has some stuff in it you've never had before, or perhaps it's been prepared in a way you're not accustomed to. But then you take a bite and ... you know what? You don't hate it. You even think about posting a picture to Instagram to show all of your friends that you eat weird shit sometimes.

The second helping is where things get dicey. Those strange ingredients lose their appeal, and you realize, "Hey, maybe the one spoonful was enough." Such has been my experience with the microtonal compositions of Bostjan Zupancic, aka St. Johnsbury's Russ Hayes, and his latest album, Nothing Special.

With last year's MicroMetal Vol II, Hayes dropped his fourth album using the 19-EDO scale, an alternate tuning that can have a startling effect when applied to Western music. As noted in Seven Days' review of that record, the bizarre tuning worked better on the heavier material. It just seemed to cater to Hayes' strengths as both a songwriter and a guitarist. Unfortunately, Nothing Special is at best a more contemplative record and at worst just a bad fit for Hayes' unusual skill set.

Dissonance, drone and sudden key changes are all tools that Hayes can deploy to great effect. The problem on this go-around is the settings in which he has chosen to use his now-characteristic tuning. Take the title track, which attempts a sort of classic rock vibe. Sure, there's plenty of shredding, but the song comes across like a Led Zeppelin tune played off-key. "Twenty-First Century Blues" is even more egregious, an all but unlistenable accidental parody of classic rock.

For the most part, the album does not present Hayes' best lyrical work. What might be intended as self-deprecation often crosses over into petulance and self-loathing — such as on "Interesting Enough." The song is a mostly spoken-word anecdote, an imagined conversation with an unknown and apathetic critic whom Hayes excoriates for either not listening to his music or not understanding it. Between that and "Emailing a Coworker Halfway Across the Globe" — a tune that is literally just Hayes bitching about a coworker — the pettiness gets old quickly.

There are bright spots on the record, however. Hayes and his tuning still make for some riveting instrumentals. "Get Psyched" is a vicious little number, and "Forced Air" has a crushing groove to it. Both tracks serve as opportunities for his guitars to really bite into those microtones.

However, those moments are too rare to keep Nothing Special from being a tough listen. Hayes has shown himself to be a musician who will attempt the unorthodox and risk alienating listeners. Here, that bravery by and large fails him. The record is anti-easy listening, a dish only a few at the party will come back to for a second helping.

Nothing Special is available at bostjanzupancic.bandcamp.com. Give it a listen; I've been wrong before.

Speaking of Bostjan Zupancic, Nothing Special