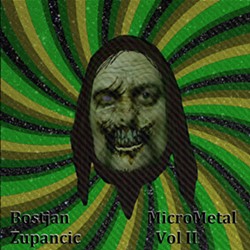 1998 is a year I chiefly remember for scoring a job reviewing videogames, then promptly getting such a glorious case of mono that my whole fall semester was wiped out. The two events crossed over with tragic results when I was assigned to review a Japanese role-playing game called Grandia. I'd never attempted to play any game like it in my life. I spent most of the time I was supposed to be playing just staring at the screen and muttering, "What the fuck is happening?" I don't know if it was the mono or the game, but my confusion bordered on the hallucinogenic.

Which brings me to Bostjan Zupancic's MicroMetal Volume II. I'll get to the finer details of why this is such an odd-sounding record in a second. But it's fair to say that MMVII is even weirder than playing obscure Japanese RPGs while heavily medicated.

Those familiar with Zupancic — aka St. Johnsbury's Russ Hayes (not to be confused with the judge at the European Court of Human Rights in Strasbourg, France) — and his 2016 album MicroMetal Volume I, will find the guitarist up to his usual experiments in tonality. Hayes is a proponent of the 19-EDO scale, a form of alternate tuning that uses microtones. The scale is more common in Eastern music, though Western composers have been using it since Guillaume Costeley's Seigneur Dieu ta pitié in 1558. It hasn't found a foothold in modern popular music because the quartertones can sound simply out of tune to the uninitiated.

Hayes is in no hurry to cater to that crowd. He builds riffs like spider webs on the punishing "Demon of Entropy" — a song that comes across as Mike Patton fronting the fictitious cartoon band Dethklok. But he has vision. Every note, however dementedly off it sounds, is placed ever so carefully. At times MMVII is transcendent. And then there are moments when the songs feel like someone is pointing a finger at you until it almost touches the space between your eyes.

More than anything, though, there is shredding. So much weird, tonally abusive shredding. To circle back to the confused hallucinations, one moment — say, "Buried," for example — makes you feel like you're a conquering Viking with an ax. The next — "From Death to Life," perhaps — you're pretty sure the FBI are in your laptop and totally fucking with you. It's not just the tuning scale, either. Hayes writes enchantingly weird stuff. But at its brightest moments, MMVII really brings the listener to strange shores.

The results are less stellar when Hayes eases up. While he makes a gripping plea to take control of one's destiny on "Give In," his laid-back turn on "The Finite Song" doesn't hold together as well. The tuning does him no favors when it comes to some of his vocal melodies. My conscious mind knows the pitch isn't technically off. But my unconscious Western brain doth protest.

The casual metalhead might not be ready for Hayes' experiments. But more studious listeners just might find themselves drawn into the heavy dose of bizarre.

MicroMetal Volume II by Bostjan Zupancic is available at bostjanzupancic.bandcamp.com.