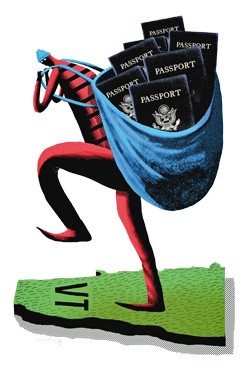 In the spring of 2003, federal authorities raided the Texas home of an aspiring terrorist named William Krar. They found vast quantities of sodium cyanide and hydrochloric acid and a large cache of machine guns and ammunition.

Agents found Krar because a package he mailed wound up at the wrong address. Inside authorities found false identification documents, including a Social Security card, a Defense Intelligence Agency identification card, a United Nations Multinational Force identification card and — perhaps strangest of all — a Vermont birth certificate.

What was Krar, who had no known ties to Vermont, doing with someone else’s birth certificate? How did he get it?

Easy, said Rich McCoy, the public health statistics chief for the Vermont Department of Health. In Vermont, birth certificates are public records, so almost anyone can call or walk into a town clerk’s office and pay $10 to get one — no questions asked.

“Anyone in the world could obtain a copy of a birth certificate — no ID, no identifying information,” said McCoy. “Just go, pay your money and walk away with a certified copy.”

Vermont has earned a bad rap for its weak open-records law. But McCoy and others believe the state’s policy on birth certificates may go too far in the other direction.

While more and more states are restricting access to birth records, Vermont remains one of only three “open records” states — along with Massachusetts and Ohio — that give those documents to anyone who asks. McCoy worries the policy makes Vermonters more vulnerable to black-market criminals who sell birth certificates to people who use them to obtain fraudulent documents, such as passports and driver’s licenses. The thieves get personal information — a full name, address, sex, place of birth, parents’ place of birth and, in the case of older records, race. Plus, certified copies come on special security paper with the state’s official seal and signatures, which criminals can study to produce authentic-looking fakes.

Each year, Vermont receives some 115,000 requests for certified copies of birth certificates through town clerk offices, the state health department and the state archives, according to McCoy. It used to be that fewer than five requests a year were considered suspicious, McCoy said. In the last two years, however, as other states have imposed restrictions, that figure has increased to five a month. McCoy thinks the number will continue to grow.

“No question, I do deal with more questionable requests and more phone calls from the U.S. passport fraud office asking me to review documents they have received,” McCoy said. “In the last year, 75 percent of the ones they’ve sent me, I could not confirm they were legitimate Vermont birth certificates.”

Requests from the former Yugoslavia — a known hot spot for identity crimes — always raise red flags, McCoy said, as do any requests for multiple copies of a single birth certificate, which can fetch thousands of dollars on the black market.

There have been high-profile domestic fraudsters, too. In the late 1980s, a high-ranking New York state police officer was charged with conspiracy in a scheme to sell false Vermont birth certificates to people seeking American passports. Authorities said that James F. Tansey made about $50,000 creating and selling sets of phony Vermont birth and baptismal records over a period of several years.

It was only three years ago that Vermont began printing certified birth records on security paper. Prior to that, many towns issued them on plain printer paper, McCoy said, meaning they were “super easy to fabricate. Vermont was on the bad list because it was just so easy to create fraudulent copies.”

A sweeping vital-records bill, passed last session in the Vermont House. It would have changed the law to allow only an individual and his or her family members to access birth records. Anyone could still obtain an “informational copy” — essentially a computer printout that reveals all the information on a birth certificate but without the security paper and official seal. Also, the bill would have upped the punishment for fraudulent use of a birth certificate to $10,000 in fines and up to five years in jail.

The bill never made it past the Senate.

That’s fine with State Rep. Duncan Kilmartin (R-Newport), who argued strenuously against the bill on the House floor. He objected to one of the provisions of the bill, which would have created a central database for vital records.

Using WikiLeaks as an example, Kilmartin said it would have been an open invitation to computer hackers. “This idea that we’re going to have a central computer in the health department that’s going to protect us from identity theft is a joke,” he said. “And what’s to keep a corrupt commissioner or a low-level clerk from going in and altering identities of vital records?”

The vital-records bill has one more year to pass before it expires. In the meantime, McCoy hopes Vermont will be included in the testing phase of a national database of vital-records fraudsters. It’s scheduled to roll out next year.

“That would make me feel a little more comfortable,” McCoy said. “If we get a questionable request, we can enter it into the database and see if the person has a history.”