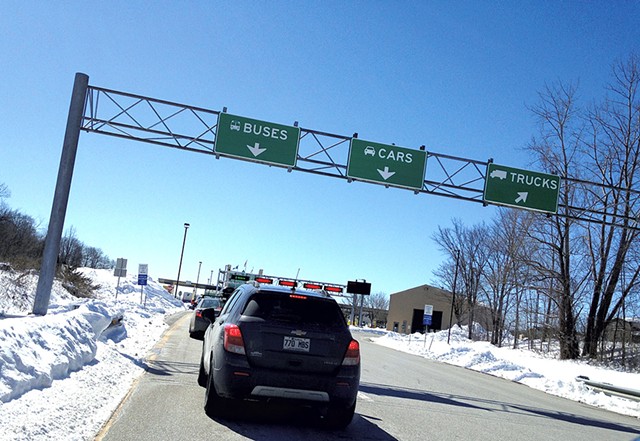 The Homeport store on Burlington's Church Street Marketplace employs several French speakers to offer friendly assistance to customers from Québec, but these days they don't need to say "bonjour" as often.

The weak exchange rate has reduced Canadian traffic at many Vermont stores, and now another blow to commerce could be looming — at the border.

A federal proposal to implement biometric screening such as fingerprinting and eye scans could bring longer lines and wait times when merchants are already worried about losing Canadian shoppers. It's important for border crossings to flow smoothly, said Homeport co-owner Frank Bouchett, who doesn't see the need for biometric screening.

"Anything they do like that," he said, "doesn't help our business."

The new layer of screening is a little-discussed side provision of President Donald Trump's controversial revised executive order on immigration. The same order that would restrict travel from six Muslim-majority countries also calls for border security using biometric checks.

Trump's order, which faces ongoing legal challenges, calls for "expedited completion" of a biometric entry-exit border screening system for people who are not U.S. citizens. It's unclear exactly how the policy would be rolled out, or when. It could require all noncitizens to be fingerprinted on a 10-digit scanner at the crossing or to submit to eye scans that border guards would perform with handheld devices — a more laborious and possibly lengthier process than the current review of documents.

Critics worry that crossing the 90-mile Vermont-Canadian border could become more of a hassle, and that some people will decide not to come at all.

"My huge fear here is that this is an action that would have the inevitable consequence of curtailing tourism and curtailing commerce and not enhancing security," Congressman Peter Welch (D-Vt.) told Seven Days.

The weak Canadian dollar and proposed enhanced screenings are not the only worry these days for the many Vermont businesses that rely heavily on visitors from the North. The Montréal press has reported many stories about Canadians who have been turned back at the border in recent months. Some businesspeople say they are concerned about potential boycotts to protest U.S. immigration policies.

That could dent Vermont's tourist economy. About 650,000 Canadians, mostly from Québec, visited Vermont in 2015 and spent roughly $152 million in Canadian currency — $120 million in U.S. dollars. That's according to Statistics Canada, the country's government data agency. The figure is down from $182 million Canadian loonies spent in 2013.

Worry about the Vermont economy led Welch to join five fellow members of Congress, all from states that border Canada, in writing U.S. Department of Homeland Security Secretary John F. Kelly a letter of concern about the proposal to routinely subject visitors to biometric screening.

Every day, nearly 400,000 people cross the U.S.-Canada border, according to the letter, which urges the U.S. to move slowly and cooperate with Canada on any new screenings. Increased border congestion could lead to "profound economic consequences" for northern border communities, the letter states.

"My hope is that we'll be able to kill it," Welch said of the proposal.

"My hope is that we'll be able to kill it." Congressman Peter Welch tweet this

Over time, border traffic goes up and down, influenced by the exchange rate, gas prices and required documentation.

Washington, D.C., decision makers have long signaled support of stronger security at the borders. President Bill Clinton signed a law authorizing biometric screenings in the 1990s, but it was never implemented. Congress passed a similar measure after the 9/11 terror attacks in 2001. That law, too, has never been fully carried out due to its expense, logistical challenges and resistance from civil libertarians. They see widespread government collection of biometric information as a scary intrusion on personal privacy.

Supporters of Trump's plan say it would help reduce the use of fake travel documents. Fingerprints, after all, can't be forged.

Biometrics might sound like something out of a James Bond spy movie, but the technology is fast becoming part of everyday transactions and personal security in the digital age. Scanners and cameras record physical characteristics such as fingerprints, faces, irises or even the sound of a person's voice. The data can be stored in a computer system or in an electronic chip on a document — such as the U.S. e-Passport.

Some personal computers and phones have a fingerprint login option, and some theme parks use a finger-scanning entry system for visitors.

The U.S. Customs and Border Protection's NEXUS card program prescreens frequent travelers who want to pass quickly through designated customs lines. That requires a biometric identifier such as fingerprinting. To some travelers, biometrics are already familiar.

"It's kind of the same thing if you use NEXUS," said Catherine Draper, an Ottawa resident who crossed the border at Highgate Springs into Vermont last month.

Her 20-minute wait that day was fairly typical, Draper said, as she gassed up her car in Swanton. She said she's probably going to apply for the NEXUS card to speed up her regular visits to her daughter in Massachusetts.

The use of retinal scans or facial recognition software is a long way from the old days of crossing the border between Vermont and Québec.

When Newport Mayor Paul Monette was growing up, a hello and a wave were all the documentation needed to cross at nearby Derby Line.

"My father knew everybody," Monette recalled. "They would just see us and wave us through."

These days, the "bienvenue" signs all over northern Vermont are not enough to stop stinging criticism in Canada of U.S. Customs and Border Protection practices since Trump's inauguration. Several instances of people being denied entry from the Montréal area since January have generated controversy and allegations of racial or religious bias.

One of those cases involved Manpreet Kooner, a Canadian citizen of South Asian descent who has often visited the U.S. She had plans for a spa day in Stowe with her friends earlier this winter. Kooner told CBC News last month that she was detained at the border for six hours, photographed and fingerprinted before she was turned back. She said an agent told her, "I know you may feel like you've been Trumped."

Kooner says border guards told her she could not cross because she lacked a valid immigration visa, a document that, according to her, she did not need on previous crossings. Customs and Border Protection agents have declined to discuss the reasons Kooner was denied entry.

Kooner posted about the experience on Facebook. More than 200 people commented on her page in response, with some calling for a boycott of the U.S.

Montréal media has been full of such stories, and Vermont business and political leaders have noticed.

"If you're going to make a decision to take a principled stand because of something that's happening in culture, realize that Vermont is the counterculture of what you're seeing at the national level," Brady was quoted as saying.

After the story ran, Brady talked on the telephone with Kooner.

"Our economy and our culture is welcoming; that's the message I wanted to share," Brady told Seven Days.

He also wanted to hear Kooner's story, he said. "I'm certainly not qualified to make a determination as to what happened in any individual case," he said afterward. "And I don't know all the facts in her story."

But, he continued, tourism in Vermont will be hurt if people feel they are being treated unfairly at the border.

Meanwhile, some business owners worry that they are starting to see signs that Canadians are staying away.

Walter Blasberg, owner of the North Hero House Inn & Restaurant on Lake Champlain, has long enjoyed business from Canadians, especially from Québec and the Ottawa area. Recently he received a Facebook message from a longtime customer.

"She said she was going to break a 45-year tradition and not come to Vermont this summer, and she wouldn't come back until Trump was out," Blasberg said. "I was shocked."

Not every business is suffering. Jay Peak Resort in northern Vermont draws heavily from the Montréal area, and Canadian skiers have been enjoying the season, said JJ Toland, communications director. "We haven't heard any grumblings about border crossings."

In Newport, Mayor Monette has read news reports about some Canadians being turned away at the border but said he's not hearing local buzz about widespread problems since Trump took office.

Instead, the weak Canadian dollar — once at parity with the U.S. dollar but now worth just about 75 U.S. cents — continues to cast a long shadow, he said.

"Our travel is down, I think, mainly due to the exchange rate," Monette said. "That plays a big impact on people coming over the border."

If biometric screening leads to longer lines at the border, Vermont could see fewer Canadians coming down, he worried. He said, "I think it would discourage some people."