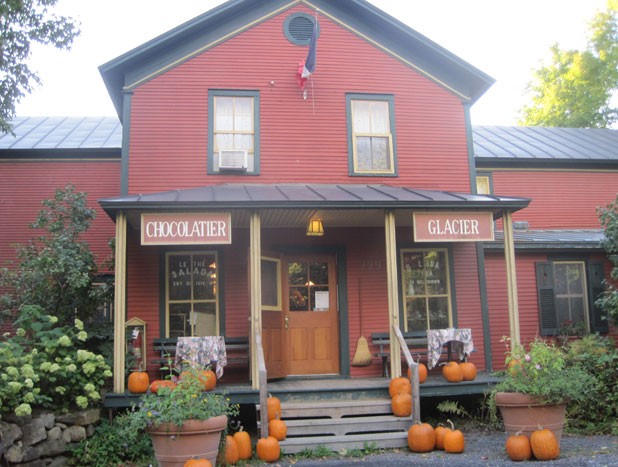 When I tell people I’m going to Canada for a food-centered day trip, they have every right to assume I’m headed to Montréal. Often I am. There’s no closer place to hit great farmers markets and taste practically any ethnic cuisine. However, every couple of months, I go on a shorter jaunt to Bedford, Québec.

Why Bedford? Why not? The town of about 2500 souls may not be a gourmet destination, but it’s just across the border and right off Route 133, the Canadian continuation of I-89. In about the time it takes to get to, say, Stowe from Burlington, I can access a broad range of French Canadian cuisine, from idiosyncratic Québécois diner fare to an elegant continental dinner. I can even take home tastes of New France from the grocery store. And, because Bedford is small, so are its prices. That’s an important consideration in the new age of exchange rates that don’t favor the American dollar.

I first came to the village on Route 202 10 years ago, when, on a whim, my mother and I decided to try a new grocery store. My memories of childhood travels consist primarily of supermarket trips, whether they involved discovering curry- and tarragon-flavored tubes of mayonnaise in Lausanne, Switzerland, or a store in Pigeon Forge, Tenn., with candy instead of veggies in the “produce” aisle. Even just going from town to town, we always found something to get excited about. Living in Vermont, with another country just 40 minutes away, we didn’t hesitate to jump in the car and explore.

When we first tried Bedford’s Métro Plouffe market on avenue des Pins, we were pleasantly surprised by the cute little town located just to the right of the silver-painted church visible from the highway. We also found a little joint where we loved to have lunch. Restaurant Pizzeria Bedford is the place’s official name. Since there are no signs to that effect, and the windows are painted with giant phantom mustaches and chef’s hats, we refer to it simply as the “mustache restaurant.” My boyfriend alternatively calls it the “Oates restaurant” in a nod to Daryl Hall’s musical partner.

Though the place is a pizzeria, I’ve never had pizza there, despite the quirky topping options promised by the menu, including “pizza-ghetti,” “pizza-violi,” “pizza-sagna” and “pizza-lade,” as in salade. No, seriously. They will put any of those pasta dishes, or salad, on your pizza. Pizza-ghetti, in particular, is kind of a Québécois diner specialty. Sometimes the second starch comes on the side, sometimes right on the pie.

I prefer another combination that’s slightly out of left field: chicken parmigiana made with Bolognese sauce. Imagine the delightfully crispy, cheesy parm from Junior’s Italian in Colchester. Then imagine the dish itself got really hungry for a burger. There’s as much ground beef in it as chicken. My kind of meal.

For $11.95, the moustache restaurant also cooks up a lovely filet mignon with sautéed mushrooms. Each entrée comes with soup (I like the creamy chicken filled with fresh veggies); a salad covered in thick, mayonnaise-heavy dressing and topped with an orange round; a roll still in its individual factory wrapper; fries; and rice. You’ll have cash left over for a giant piece of cake from the wonderfully varied diner-style case. I recommend the Black Forest or chocolate-mousse cake, each slice as tall as two or three normal cakes in a stack.

The average Québécois diner menu offers more surprises than just poutine with hot dogs cut into it (which, by the way, is better than it sounds). At Restaurant Barry in Bedford, I recently learned about guédilles, which share menu space with cheeseburgers and grilled-tomato sandwiches. The Québécois specialty is a hot-dog bun filled with anything but the hot dog — from chicken salad to lobster.

Feel like a lighter meal? Look for the elephant-shaped sign of Fusion d’Asia. As the name indicates, the modern, elegantly appointed restaurant offers some of Asia’s greatest hits, including pho, General Tso’s chicken and pad Thai. I enjoy the prix-fixe lunch, which includes three courses for $7.95 to $14.95. Even the humble wonton soup, dusted with cilantro and lettuce, is pleasing to the eyes and taste buds. Besides new tastes, the restaurant provides the tiny rural town with a little ethnic diversity. On my last visit, my server told me in facile English that he was originally from Vietnam.

After a filling lunch, I’m ready for the supermarket. While most grocery stores open straight into a produce aisle, Métro Plouffe hooks you with pastries. Just to the left of the entrance, a large freezer holds a rainbow assortment of beautiful cakes, pies and tarts. They’re inexpensive, too. A very large gâteau Charlotte Russe, tied with a red bow, retails for $14.95. On my last trip, I went for the “crêpe divine au chocolat” from a company called À Table. The name didn’t lie — the perfectly soft pancake, filled with dark, minimally sweet chocolate, was nothing short of heavenly and took just a minute to heat in the microwave.

Other aisles are lined with croissants of every size, maple pies and brown-sugar rolls known as “pets de soeur,” or nun’s farts. You can also buy loaves of bread from one of my favorite Montréal bakery chains, Au Pain Doré.

The cheeses come from France and Québec, with an emphasis on Brie and Camembert. I always go for presliced containers of Gruyère and smooth, nutty raclette. Across from the cheese aisle is a superb variety of meats. At Métro Plouffe, the pork is almost as red as beef, and the flavor matches the color. The butcher shop specializes in stuffing loins with tantalizing combinations. I’m particularly fond of delicately seasoned meat filled with brie, spinach and cranberries. The meat is inexpensive for its quality, too. A one-pound bone-in rack of pork is slightly more than $7.

The butchers make a wide range of sausages, including cheddar-bacon and garlic-honey — plus boudin. You can get slices of the blood sausage, alone or packed with hot dogs, for between $1 and $2.

The foreign grocery store offers bigger surprises. Some foods that seem exotic or haute to most Americans are run of the mill here. Take, for example, the plainly packaged tubs of pork cretons beside the bacon, or the ridiculously pretty coquilles St. Jacques (a scallop dish) in the freezer section. Not far from the shellfish are frozen packages of fondue Chinoise, thinly sliced meats for making fondue. They come in a menagerie of options: kangaroo, duck, ostrich, wapiti (elk) and wild boar.

At this point, Americans who’ve filled their stomachs at the lunch joints and their bags at the grocery may be ready to head back over the border. But there’s a reason to stay in Québec for dinner. Five minutes north of town sits a restaurant called L’Oeuf in a circa-1860 former general store.

To reach the dining room, guests must pass behind the counter where Normandeau scoops his housemade ice creams in flavors including tea, maple and cardamom. The dark wood walls are crowded with paintings of flowers and merry young ladies from the 18th and 19th centuries. On a shelf near the ceiling, teapots and creamers line the room.

I order the four-course prix-fixe dinner with “lapin À l’humeur du chef.” That’s rabbit “to the chef’s taste or mood,” meaning he likes to showcase bunnies a different way each day. Other tempting choices are duck confit and Toulouse-style sausages.

The meal starts with chewy, crusty bread with creamy, salty butter. I use it to sop up every bit of the creamy vegetable soup, which is filled with thyme leaves.

Normandeau says he got the recipe for the next course, a rustic terrine, from an innkeeper in France, and it shows. The hearty mix of pork and chicken livers comes with ratatouille served in a hollowed-out cucumber. The sweet, fresh vegetables balance perfectly with the dark muskiness of the pâté.

The main course involves more rabbit than I bargained for. Not that I mind much. The whole, fork-tender saddle, braised in a sharp mustard and wine sauce, rests atop a huge nest of delightfully chewy, housemade tagliatelle. Squash and baby haricots verts on the side are cooked to perfection.

At a chocolatier’s, dessert better be good. I choose profiteroles and a side of the darkest hot chocolate I’ve ever had. After I pay for my $38.75 prix fixe, I’m presented with a single square of indescribably rich milk chocolate.

Back at the counter, among the gourmet goods and chocolates, I peruse the homemade jams, including an especially tempting preserve of strawberries and lavender. When I tell Normandeau I’ve come from Vermont, he says he has many loyal customers from Burlington and St. Albans. Many of his antiques come from Vermont, too.

Seems the cultural exchange works both ways. Perhaps Normandeau would be as excited to grab some Cabot cheddar at Shaw’s as I am to bring home a gigantic jar of Pommery mustard from his store.