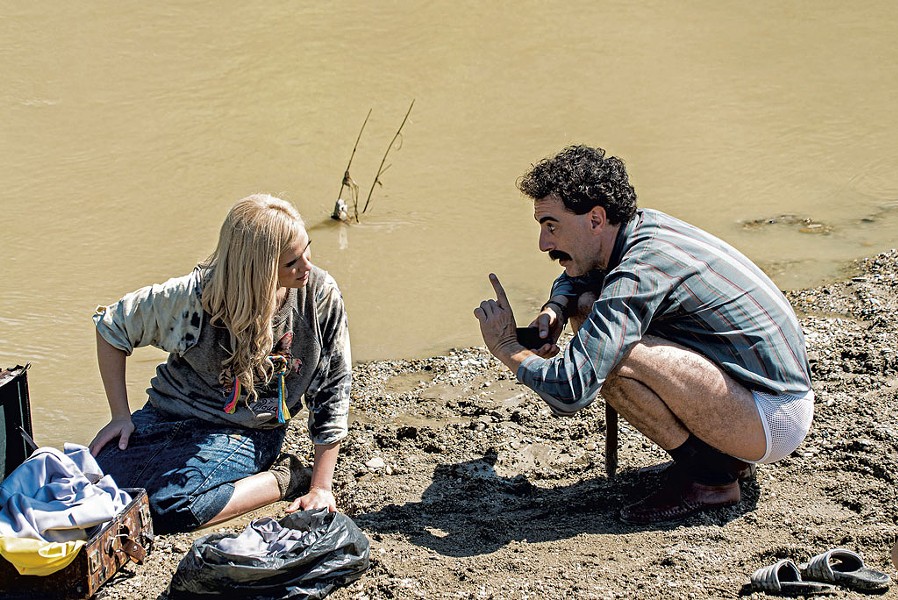 Our streaming entertainment options are overwhelming — and not always easy to sort through. This week, everybody's talking about Rudy Giuliani's unwitting cameo in the sequel to the hit mockumentary Borat: Cultural Learnings of America for Make Benefit Glorious Nation of Kazakhstan (2006), this one directed by Jason Woliner. You can stream it on Amazon Prime Video or make a night of it at the Sunset Drive-In in Colchester.

Things have not gone well for Kazakh journalist Borat Sagdiyev (Sacha Baron Cohen) since his first trip to America. The popularity of the resulting "moviefilm" brought shame on his homeland, so he has spent the intervening years in a gulag.

Now, however, the election of "McDonald Trump" has inspired Kazakhstan's fictional thuggish premier (Dani Popescu) to dream of hobnobbing with the president like other thuggish leaders around the world. He offers Borat one chance at redemption, summed up by the film's subtitle: "Delivery of Prodigious Bribe to American Regime for Make Benefit Once Glorious Nation of Kazakhstan."

But what — or who — will be the bribe? When something goes wrong with the original plan to present "Johnny the Monkey" to Vice President Mike Pence, Borat decides instead to offer his 15-year-old daughter, Tutar (Maria Bakalova), who dreams of being the next Melania. As he attempts to transform this semi-feral teen into a "sugar baby," COVID-19 happens.

Watching Borat and its sequel back-to-back, I was struck by how tame the first film's "gotcha" moments seem now. Americans openly expressing racism, sexism, anti-Semitism and homophobia? You don't say!

Today, we don't need a fake Kazakh journalist to coax people into admitting who they really are. Aside from the obvious element of bad-taste comedy, nothing in Borat Subsequent Moviefilm is likely to shock viewers — not the QAnon believers with whom Borat quarantines for five days, not the anti-lockdown protest he attends, and not even Tutar's now-famous encounter with the president's lawyer. (While the degree of inappropriateness displayed in that "interview" is open to interpretation, it's an overall cringe-worthy affair.)

Misogyny is a major theme in the sequel, with Bakalova giving a go-for-broke performance as a young woman determined to better herself in the only way she knows: by enticing a powerful man to "grab her by the vagine." In an interview with Maureen Dowd, Baron Cohen said that "we wanted [the film] to be a reminder to women of who they're voting for — or who they're not voting for."

Four years after the "Access Hollywood" tape, that sentiment seems a tad naïve. But it's also kind of cluelessly sweet, much like Borat when he's being his best self. More scripted than the original, Borat Subsequent Moviefilm offers a surprisingly heartwarming through line about Borat learning to be a dad who doesn't lock his daughter in a cage, and maybe even encourages her to follow her dreams.

More importantly, while Borat Subsequent Moviefilm is no earth-shaking satire, it features some inspired comedy. Ridiculous as Borat is, Baron Cohen makes him real — and sometimes even likable — through sheer commitment. Bakalova does the same with a role that's even sillier. When Tutar visits a Christian women's clinic to complain of a "baby inside me" (it's not what you think), the escalating disproportion between her actual predicament and the counselor's unflappable pro-life rhetoric is horrifying and hilarious in equal measure.

Given the current threat to American women's reproductive rights, maybe it's more horrifying. But sometimes you just need to laugh at the absurdist hellscape that is 2020, and Borat Subsequent Moviefilm offers prodigious opportunities.

Borat: Cultural Learnings of America for Make Benefit Glorious Nation of Kazakhstan (2006; Amazon Prime Video, rentable): The original is still funny, assuming you aren't put off by such lowbrow antics as Borat taking a dump in front of Trump Tower.

The de facto hero of Borat Subsequent Moviefilm is Jeanise Jones, a sixtysomething Black woman who is hired to "babysit" Tutar and ends up giving her a transformative pep talk on her rights. (Not an actor, Jones has since told media outlets that she feels "betrayed" by the film crew.) For a list of real documentaries about Black women fighting misogyny on their own behalf, check out "20 Documentaries About Black Woman to Watch All Year (Not Just During Women's History Month)" at shadowandact.com.