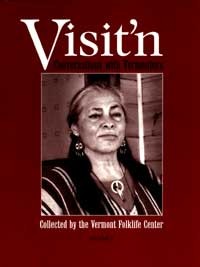 During the Prohibition era, “King” Conrad Labelle made $100,000 smuggling alcohol over the U.S.-Canadian border. He owned a fleet of fast cars — Cadillacs and Studebakers. “And when I used to shoot through, they couldn’t stop me,” he told an interviewer from the Vermont Folklife Center. “I was a very good driver. I was one of the best drivers there was around.”

Or so he said. Labelle and fellow former bootlegger Pete Hanlon told their stories on tape to the Vermont Folklife Center in the mid-1980s, and their colorful conversation has just been published in the seventh volume of VFC’s annual publication Visit’n: Conversations with Vermonters.

Whether or not some of their more outrageous claims are true — that Labelle, for example, once drank champagne during Prohibition with a U.S. President — is almost beside the point. Meg Ostrum, the managing editor of Visit’n, explains that she sifted through 300 to 400 pages of transcribed interviews with Hanlon before deciding to include this section, in which he reminisces with Labelle. The excerpt, she says, “reinforces the swagger of these two men, which is part of the bootlegging. It was a sport, in a way.”

The swagger, Ostrum insists, can be just as important as the factual story. “Oral history allows us to hear how people of the time felt or thought about what was going on,” she says. “That’s one of the fascinating aspects of oral history; you get attitudes and beliefs from the period.”

Not all of the bootlegging stories are as glamorous as Labelle’s. William “Digger” Rowley recounts a time when he hitched a ride with “an empty bootlegger,” who had just “dumped a load” and was on his way back. Traveling over a bumpy dirt road, the man sped around a curve and hit a young bull. The car, says Rowley, kept going, but the impact jarred the homemade smokescreen, “and that let the smoke and ammonia come out.”

The smokescreen Rowley describes was a tank filled with ammonia and old motor oil that rum-runners used to outfox the border patrol: “It was hooked up to the exhaust, so you could turn on that switch they had on the dash and that mixture would go into the muffler and exhaust and throw out this cloud of smoke, which would spoil the vision and the ammonia would smart your eyes,” he explains.

Rowley presents smokescreens as a fairly common device. He also remembers that sometimes the bootleggers and the farmers would work together, so that the cows might be put across the road “after the smuggler had already gone by, so that the patrol couldn’t; they’d have to wait until the cows cleared out.”

Ostrum admits that memories like these are filtered over time, but, she says, “It still comes across that [bootlegging] was an accepted form of life because it was a form of income.”

Not all the stories in this year’s Visit’n relate to bootlegging. The 63-page collection includes two lengthy features detailing the cultural exchange that happens along the Vermont-Quebec border. One is an account of the Rainvilles, a family of farmers; the other explores the French-Canadian musical traditions of the Pellerin clan.

Yet another section describes the odyssey of Israel and Mary Sadoques, the Abenaki grandparents of Mali Keating — pictured on the book’s cover. The Sadoques’ canoe journey from the Odanak Reservation to Long Island to Vermont and finally to Keene, New Hampshire, is the most harrowing adventure in Visit’n.

But the outlandish bootleggers and the border guards who pursued them easily dominate this volume. And, yes, there is one very tame account of a brothel, run by “Queen” Lil Fleury. Queen’s place was a “line hotel” — half on U.S. soil, half on Canadian. According to the profile of this statuesque lady, “The train stopped as frequently at Queen’s hotel as it did at the Richford train depot.”

These stories of illicit activity are part of what Ostrum calls “Vermont’s cultural understory,” which the Middlebury-based Folklife Center is committed to preserving. The Center began publishing Visit’n in 1995 as a way of disseminating information collected in their multimedia archives. Distributed free to Folklife Center members, Visit’n is also available for purchase at the Center, and can be found at roughly 30 other outlets around the state.

But the secret is getting out. Lately people have begun asking Ostrum to sell a box set of issues 1 through 7. “They’re collect-ibles,” she says. “People come in saying, ‘I’ve got 2 and 4, now I want 3 and 5.”

Unfortunately the first issue, which contains an account from a Vermont farmer entitled, “I Buried My Own Leg,” is already out of print. Copies still exist in the special collections rooms at some Vermont libraries, and they’re worth, um, digging up. The eclectic subject matter is often quirky and surprising.

“Visit’n really ranges over a lot of emotional material,” says Ostrum. “There are some hilarious things and some really grisly things.”

One of the latter passages in Volume 7 deals with the smuggling of illegal immigrants. Some bootleggers accepted huge sums of money in return for transporting people over the border. One trip smuggling Chinese immigrants was enough for Pete Hanlon, who didn’t want to risk the money he made as a bootlegger. He tells of another unscrup-ulous smuggler: “I don’t know how many he drowned, but he drowned a lot of them. Got the money and drowned them.”

Ostrum attributes the richness of the Center’s archives to its experienced field workers, who collect information from all over the state. “They’re able to probe people’s lives in an interesting way that doesn’t exploit the people who share their stories,” she says.

She cites the example of a “well-respected Mad River Valley man” who spoke about growing up as an illegitimate child. “This was not something that was easy for him to talk about,” she notes.

Ostrum is not the only advocate of this highly personal yet valuable historic material. National Teacher of the Year Michele Forman is also enthusiastic about Visit’n. Before she started traveling around the world as an education ambassador, Forman taught history at Middlebury Union High School. Visit’n is part of her curriculum.

“History is not just a dry list of facts,” Forman says. “Visit’n helps kids understand that history has everything to do with the real stories of human beings.”

A quote from Forman on the VFC brochure reads, “Every library should have copies of Visit’n. Who could resist its tales of lining bees, ‘the not so good old days,’ or an elephant water-skiing on Lake Fairlee!”

But Ostrum points out that, as random as their selection of subjects might seem, the staff of Visit’n are very deliberate about their choices. “When we select material, in the back of our minds we’re thinking ‘how does this relate to current events?’”

The sections on bootlegging seem especially timely in light of the current conflict over legalization of drugs, particularly marijuana. The striking photo of a 20-year-old “King” Conrad, in his expensive suit and slightly slanted cap, does not in any way resemble the more casual style of many contemporary drug dealers. However, the photo and Labelle’s recollections prove that the concept of a young person making obscene amounts of money brokering illegal substances is nothing new.

John Rainville, in his account of his family’s French-Canadian agricultural heritage, manages to touch on this subject as well. As a bystander, his recollections of the rum-runners tend to be more objective. He mentions that some local men were caught and sent to federal prison in Atlanta. “These guys, you know, they were poor,” he says. “They were trying to make a dollar… it’s almost like drugs today.”

Then Rainville relays the sort of enlightened but unsubstantiated comment that is too often lost in the dry retelling of history. Paraphrasing Mr. Menard of the border patrol, Rainville recalls, “We found out that it’s impossible to enforce a law that the people don’t want.”

If that’s not the kind of folk wisdom the school board wants students to hear, it’s the kind of insight that makes this book a valuable historical resource — not to mention a gosh darned good read.