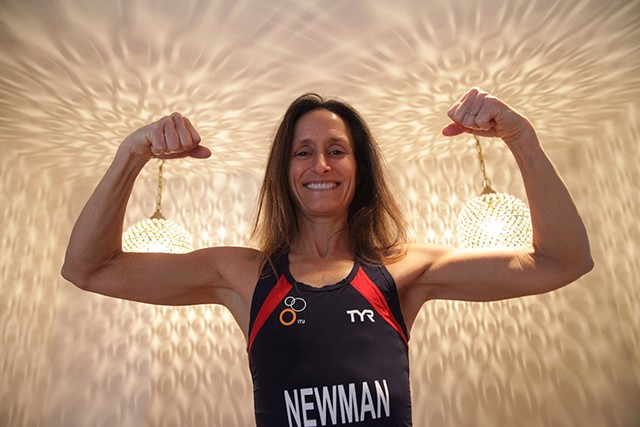 Angels still grace the bookshelves in Karen Newman's home in South Burlington. The decorations are not just remnants of Christmas; they provide a cheerful contrast with the dark spirit that Newman has lived with since middle school.

In her new book, Just Three Words: Athlete, Mother, Survivor, Newman recounts her struggle with a "taskmaster" that told her, as a teenager, to eat a single leaf of lettuce per day. As an adult — by then a professional dietitian, elite triathlete and mother of three boys — she would binge on an entire box of waffles, only to vomit them up and secretly replace the box.

Newman eventually conquered her eating disorder, but the "cure" was just as grim: breast cancer.

The disturbing details — and the dynamic way in which Newman has not only survived but thrived — are revealed in the 350-page tome she wrote after relocating to Vermont from Old Greenwich, Conn. The book, subtitled How One Brave Woman Against All Odds Wins the Race of Her Life, appears just in time for National Eating Disorders Awareness Week, February 21 to 27.

"I lived the biggest lie, and no one knew," Newman told Seven Days two days before a reading of Just Three Words at Phoenix Books Burlington. "It wasn't until I came up here and felt God pouring his message into me and saying, 'You need to tell the truth,' that I could throw off the shame. This is a story that people are hungry for — to hear the truth."

Newman was a natural athlete, a runner from a young age. "My mom said I jumped out of my crib, fell on my head and started running," she joked. "It's been therapeutic my whole life."

Swimming and biking would come later. But first began Newman's battle with shame, which she attributes to high-achieving parents, perfectionist tendencies, ultra-thin supermodel Twiggy as a role model and the experience of being bullied by a sixth-grade classmate.

"I remember being so happy: This is a new school; I'm going to meet new people; this is awesome!" recalled Newman, 54. "And I walk in, and this girl is standing at the door, and as I approach, she says, 'Are you a witch? Because you have a witch's nose.'"

Newman already struggled with dyslexia; the relentless teasing further tested her resilience. By ninth grade she was anorexic, so obsessed with being thin that she would spit out a communion wafer at church. Even its meager carbohydrates were unacceptable.

"I was just a bag of bones," Newman recalled. Yet her mental taskmaster kept pushing her: "Now you need to do 100 push-ups, 100 leg lifts; you're fat, you're ugly, you're stupid, go kill yourself."

Newman finally got a wake-up call when she saw a high school yearbook photo of herself looking like a skeleton. That very day she began, with a bite of a Rice Krispies treat her mother had baked, "to eat and to allow my body to grow into womanhood," as she puts it in her book.

"Never again have I suffered from clinical anorexia," she writes. "Instead, years later, I invited the demon to dinner again; it just showed up wearing a different mask."

That new mask was bulimia. It began with an ice cream sundae and a trip to the bathroom during Newman's freshman year at the University of Vermont, where she ran cross-country and majored in dietetics.

She became a registered dietitian at age 25, and began a long journey of not practicing what she preached. Newman knew exactly how many grams of fat, protein and carbohydrates every food contained, the calorie count of every dish ... and how many miles she would have to run to work them off.

"I would lecture [after] having made myself sick an hour before," Newman said. "It was so, so hard, because I just walked with such shame."

Still, she led an ostensibly normal life, marrying her college sweetheart, Peter, and maintaining adequate nutrition to give birth to three healthy boys. In the late 1990s, Newman discovered triathlons and would train during summers near the family's cottage at Thompson's Point in Charlotte. Somehow, she mustered the energy not only to compete but to win local and regional races in her age division. She went to her first World Championship in 2001 and placed in the top 10.

"I never ate a thing — just one tiny bite of a banana before my races," Newman confided. "Can you imagine how much better I would have been?"

In 2008, her weight hovered around 100 pounds. Onlookers at races told the 5-foot, 3.5-inch athlete that she had an "awesome" figure. And then Newman learned she had breast cancer.

"When I was diagnosed, I thought, This is great! I can't wait to get chemo; I'm going to lose weight," she said. "That's how warped I was." 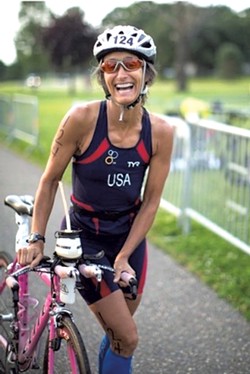 The chemotherapy she received made her throw up — and wake up. As Newman writes in chapter 22, called "On My Knees," "Cancer was not a death sentence, it was an opportunity for life. A turning point. It transformed me, and helped me realize that I was lovable and worthy; that I fit into this world and have a vital purpose, like we all do."

Newman continued to compete while battling cancer, earning multiple medals between 2008 and 2015. She'll be part of Team USA at the 2016 Age Group World Championships in Cozumel, Mexico.

Just Three Words grew from Newman's blog posts on caringbridge.org, a social-media network for people dealing with "health journeys." Her magnetic personality and story drew 25,000 online readers and now serve her well as a motivational speaker. Though the Phoenix Books event was her debut public reading of the book, she's been speaking about overcoming cancer and competing since 2008.

Newman said she knows there is a whole community of women who excuse themselves from the dinner table to "take a well-deserved bubble bath," as she writes in the book's prologue, and instead end up purging their meal.

"A lot of women are falling into anorexia or bulimia as adults now," Newman said. "There's unidentified shame. Somebody spoke some negative words once, and, now that the busyness of [raising] their kids is over, those words they never got rid of rise to the surface."

At Phoenix Books, Newman read to a packed house — perhaps verifying her claim and demonstrating the resonance of her message of healing.

Just Three Words: Athlete, Mother, Survivor, How One Brave Woman Against All Odds Wins the Race of Her Life by Karen Newman, Beaufort Books, 350 pages. $24.95.