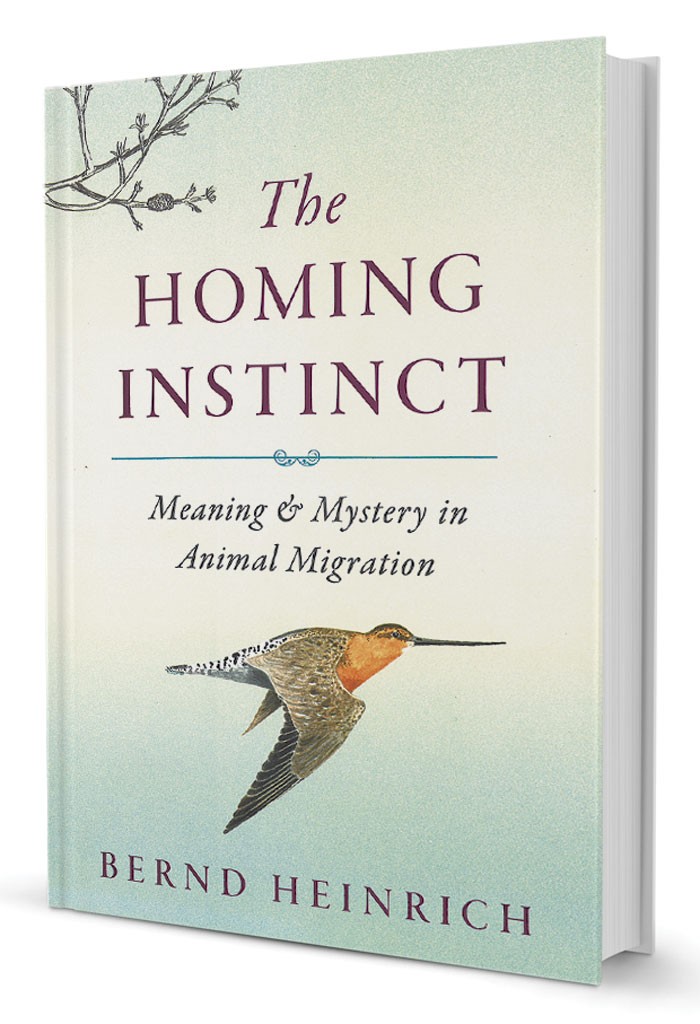 It's easy to get from point A to point B these days, as many of us carry digital maps of the entire world in our pockets. It's a remarkable convenience for which Ferdinand Magellan would have given his last piece of salt cod.

But what would we do if we didn't have maps, digital or otherwise? What if there were no roads or highway signs or high-line poles and telephone wires? If you lived in Barre, could you find your way home on foot from, say, Randolph?

Such a question is anything but trivial, as part-time-Vermonter, author and scientist Bernd Heinrich explains in his latest book, The Homing Instinct: Meaning & Mystery in Animal Migration. Were we humans forced to rely solely on geographic landmarks, or on the angle of the sun's rays, we'd likely wind up walking in circles. Meanwhile, hovering above us, perhaps giddy with mirth at our useless perambulations, would be a host of birds and insects, many of which have homing senses that are nothing short of remarkable.

One of the most incredible examples of "lesser" animals' refined homing instincts is that of the bar-tailed godwit, a sandpiper that nests in the Arctic and winters in southern Australia. The 7,000 miles that these birds fly is staggering but not unprecedented; what's astonishing is that they make the journey without stopping even once. In this sleepless process, the godwits lose half their body weight, as if they are sustained entirely by the homing impulse itself.

"Most of us just can't even imagine that," says Heinrich, 74, professor emeritus of biology at the University of Vermont. On a recent day when weather and cell-tower conditions permit, he speaks to Seven Days by phone from a remote mountain in western Maine, not far from his sylvan cabin. "These birds do this nonstop, with no place to land over the ocean, no drink, no food," he continues. "It just seems absolutely mind-boggling to me." 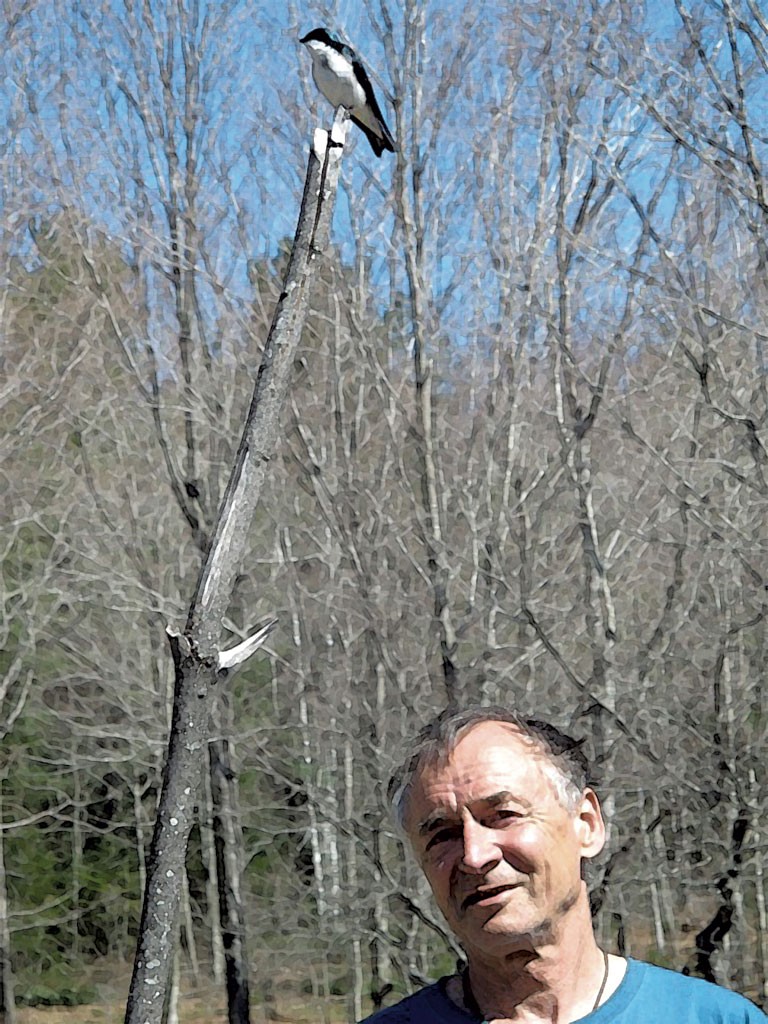 Heinrich, an accomplished ultramarathoner, knows something about traveling great distances under one's own power. Nonetheless, he says, "It strikes me as amazing how easily I get lost. You can turn me around in the dark and I'll have not the slightest idea where I'd be heading."

The Homing Instinct ranges widely, covering the migratory habits of bees (one of Heinrich's areas of expertise), birds of all types, sea turtles and salmon, to name a few. Though such animals are the book's central "players," it's impossible to read it and not reflect on one's own sensory experience of the world — and what we might be missing.

Heinrich writes that he finds it highly plausible, for instance, that certain animals have evolved mechanisms to "see" waves of magnetism, just as our own eyes have evolved to allow us to see certain wavelengths of light. Humans may not be able to detect such information, but that doesn't mean we're necessarily sensorially impoverished. Rather, Heinrich argues in the book, our sensory experiences, just like those of the many creatures he writes about, are intimately connected with our concept of home.

Human beings have evolved, Heinrich writes, to be homebodies. "We stay more or less rooted, if we can," he says in our conversation. We may pick up and move to a new city, but we don't "migrate" in the way the petrel or the honeybee does. For this reason, we did not develop, for instance, an ability to find our way home by instinctually gauging our position relative to those of the constellations (as do many birds), or by leaving a pheromone trail (as do ants, bees and other insects).

Heinrich laces his astute scientific observations with the poetic wonderment of a naturalist, a pairing that has become his trademark. His authorial tone combines respectfully objective observations with wide-eyed, deeply personal astonishment, a highly pleasing juxtaposition.

The notion of home is important to the book not just in the context of migration but as it pertains to how various animals choose home sites and construct their domiciles. In discussing the nesting instincts of animals as diverse as Surinam toads and beavers, Heinrich tacitly reveals the true subject of his book: No two animals have the same interpretation of the sentiment that our culture conveys with the trite but potent phrase "There's no place like home."

The subject of homing, Heinrich says, interests him because "it's so central to so many things that make an animal the way it is; it's central to its life." That fascination comes through in the book, which, with its diverse array of unusual case studies, compellingly argues that home is one of the chief organizing patterns by which animals on Earth live their lives.

About a hundred pages in, Heinrich poses "the ultimate and perhaps unanswerable" question of his book: When animals employ such techniques as magnetic-field detection, pheromone transmission or astronomical geolocation, are they conscious of where they are and what they are doing? Or do all of these remarkable capabilities exist solely on the preconscious or unconscious levels?

In conversation, Heinrich does not profess to know the answer to that question, which intersects with still-underexplored subjects such as the very nature of consciousness. As in his other work, the author is unafraid to take on such huge questions as these. The power of his informed, engaging book to instill a sense of wonder is a testament to Heinrich's sensitivity to his subject matter.

Bernd Heinrich gives a reading on Tuesday, May 27, 7 p.m., at Bear Pond Books in Montpelier.

From The Homing Instinct: Meaning & Mystery in Animal Migration

We had scarcely lifted off in Seattle when we passed over white-capped mountains with knife-edged ridges, dark forested valleys, and peninsulas surrounded by blue-gray water. An hour later, cruising at about eight hundred kilometers per hour at eleven thousand meters, there was ever more of the same — white mountains as far as the eye could see. Another hour — it was still the same. To me, barely a feature stood out from the jumble of endless peaks that melded into each other, and the vast mountain scape was broken only by frozen lakes glinting in the evening light. And so it continued for yet another hour. When we started our descent to Fairbanks, I saw oxbows of meandering rivers, and finally the thin thread of a road.

Cranes, swans, and geese travel south in the fall as family groups. On their way, the young learn the route they will later take north in the spring, to come back to try to settle near where they were born. What they see and remember seems astounding. I might, with intense concentration, memorize a tiny portion of the way, perhaps around this or over that mountain. But these cranes come not from my point of departure, the state of Washington, but from considerably farther south. (Four cranes from the Coldstream Valley that the Alaska Department of Fish and Game had equipped with radio transmitters ended up in various parts of Texas in the winter.) I could never retrace even my own much shorter flight from Seattle, even if I were to return the day after having flown it, much less a half-year later. What are the cognitive mechanisms that allow the birds to do this?