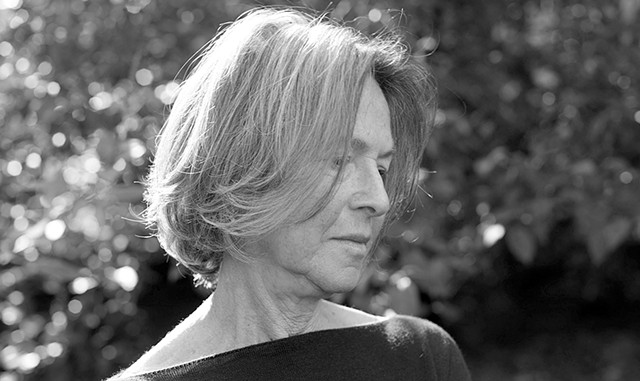 Louise Glück begins her 13th collection of poetry with the modestly entitled "Poem," which begins like a folktale about two children:

hand in hand like a boy and a girl

pausing only to eat wild berries out of a dish

painted with pictures of birds.

In only 28 lines, the poet bounds across several centuries and glides through a succession of tonal universes, from pastoral to hallucinatory to fearsome, coming to rest gently with that consoling last line — which is also startling, as if spoken directly to the reader.

Glück moved to Vermont in the early 1970s and served from 1976 to 1980 on the now-legendary original faculty of Goddard College's MFA program for writers. She later moved to Massachusetts and worked for decades as a traveling writing teacher, including at Yale, Boston, Brandeis and Stanford universities and Williams College. In 2021 she returned to Vermont, where she now resides in Montpelier part time.

Glück's poetry is often described as austere or spare, but a longtime reader may find these adjectives reductive and incomplete. Her poems are spacious, incorporating the empty page that surrounds a text, employing the gaps between stanzas, between poems and even between books to make leaps in association and insight.

Here's the opening to "Winter Journey."

Well, it was just as I thought,


We had moved then

from the first to the second stage,

from the dream to the proposition.


here is the line between,

this line from which our words emerge;

Is this passage about a walk in the snow, or about a mythic descent to the underworld, or about the juxtaposition of sleep and waking, or about writing itself? Those who love this poet's methods and modes know the best answer is all of these and more.

In her Nobel lecture, acknowledging her childhood love of William Shakespeare, William Blake and Emily Dickinson, Glück referred to a writer's "pact" with a reader. She said she kept returning, as she grew older, to "the poets in whose work I played, as the elected listener, a crucial role. Intimate, seductive, often furtive or clandestine. Not stadium poets. Not poets talking to themselves."

Her new book's title is odd. At first, Winter Recipes From the Collective might sound like a seasonal cookbook. Then there's the unexpected reference to "the Collective," which evokes a political sphere — not just a crowd but an organized faction. The incongruity of this word is obliquely comical.

Glück used the same word in her Nobel lecture, acknowledging the "panic" she felt at being suddenly thrust into public view one morning, told she'd been given the grandest of international accolades. "In art of the kind to which I was drawn, the voice or judgment of the collective is dangerous," she said. "The precariousness of intimate speech adds to its power and the power of the reader, through whose agency the voice is encouraged in its urgent plea or confidence."

She offered a glimpse, via a discretionary third person, into the response of a very private artist to this sudden spotlight: "What happens to a poet of this type when the collective, instead of apparently exiling or ignoring him or her, applauds and elevates? I would say such a poet would feel threatened, outmaneuvered."

The book's front cover offers a visual riddle akin to the verbal riddles within the book. A drawing of a tiny bird chick hovers in the center above embossed type; four lines of Chinese calligraphy appear at the upper right. The rest of the jacket, including the back, is empty, cream-colored parchment, calling to mind the empty/full void ever-present in traditional Asian art.

Like the book's title, the bird image is amusing — in a certain way. A small being, crouched low and looking up with the dot of its eye, as if to say, "Don't look at me . . . I'm here but not here."

Glück is a poet whose writings often reflect back a reader's gaze. Even in poems that sound intimate and autobiographical, mythical allusions and a classically elevated resonance assert, "Don't look at me." She asks us instead to look closely and far, to look hard and well — while, as in "Poem," "the world goes by, all the worlds, each more beautiful than the last."

This is indeed a wintry book. The title poem is a fable about enduring hardship. It mixes eras and locales, invoking the gathering and fermenting of wild moss, the propagation of miniature trees, and the making of an "invigorating winter sandwich" for market.

it was good to eat; it was what you ate

when there was nothing else, like matzoh in the desert, which

our parents called the bread of affliction...

The poems in Winter Recipes From the Collective converse with one another and with their companions in previous books. "The Setting Sun" is a four-part parable about a painter and a student. "The Denial of Death" recounts an unnerving, metafictional story of a lost passport. A number of briefer poems pivot on dialogues between two sisters as children, which we're invited to understand as portions of a dispersed yet unified sequence.

Quietly magnificent, Glück's poems require a concentration that many people find hard to summon now. She never ends a piece with a ringing epiphany or a revelatory punch line. Sometimes an ending seems weirdly arrested, suspended partway between assertion and implication. She has a powerfully definite sense of where to halt, leaving a reader fully involved yet neither at ease nor sated: impelled to read the poem again.

Glück relies on her readers' intuitions, not just on our logical judgments; on our willingness to read slowly and carefully; and on our courage to face the more frightening, dislocating demands of her poetry's splendors as she moves inward and outward, back and forth, between particularity and reverie. We see and hear that movement in these lines from "Song," the book's conclusion:

blows as I cross the desert;

I can see his house in the distance;

smoke is coming from the chimney


That is the kiln, I think;

only Leo makes porcelain in the desert


Ah, he says, you are dreaming again


And I say then I'm glad I dream

the fire is still alive

'A Children's Story' from Winter Recipes From the Collective

Tired of rural life, the king and queen

return to the city, all the little princesses

rattling in the back of the car, singing the song of being:

But there will be

no conjugation in the car, oh no.

Who can speak of the future? Nobody knows anything about the future,

even the planets do not know.

But the princesses will have to live in it.

What a sad day the day has become.

Outside the car, the cows and pastures are drifting away;

they look calm, but calm is not the truth.

Despair is the truth. This is what

mother and father know. All hope is lost.

We must return to where it was lost

if we want to find it again.

The original print version of this article was headlined "Quietly Magnificent"

Speaking of Louise Glück, Winter Recipes From The Collective